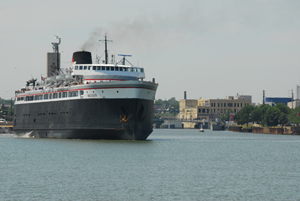 The S.S. Badger getting under way in Manitowoc, Wis. The car ferry connects the eastern and western segments of U.S. Route 10. This file is licensed under the Creative Commons Attribution 2.5 Generic license.

LUDINGTON, Mich. (AP) – On many a summer evening, Jim Fay joins dozens of onlookers on this tourist town’s waterfront, exchanging friendly waves with passengers and crew members as the S.S. Badger chugs into the harbor after a 60-mile voyage across Lake Michigan from Manitowoc, Wis.

It’s a cherished ritual in Ludington, and its days may be numbered.

The Badger, the nation’s last working coal-fired steamship, is under orders from the U.S. Environmental Protection Agency to stop dumping waste ash into the lake. Coal ash contains low concentrations of arsenic, mercury and other heavy metals, although it’s not classified as hazardous. The ferry discharges more than 500 tons during a typical season from May to October, and operators say there’s no quick fix.

If the standoff isn’t resolved, the Badger could be grounded—a disheartening prospect in its home port of Ludington, which takes pride in its maritime history as do many Great Lakes coastal towns. The ship is also important to the economy, employing about 200 during sailing season.

“It’s rooted deep in this community,” said Fay, 64, whose father, like those of his closest boyhood pals, was a ferry crewman. “The Badger is the last of its kind. I just hate the idea of losing it.”

Up and down the shorelines, relics of history draw tourists by evoking nostalgia for a simpler time. The clip-clop of horses pulling carriages is a familiar sound on car-free Mackinac Island. In Saugatuck, a hand-drawn chain ferry dating from shortly after Michigan gained statehood in 1837 still traverses the Kalamazoo River. The village of Leland has “Fishtown,” a tiny remnant of a commercial fishing village featuring weather-beaten shacks, smokehouses and charter boats.

The Badger, a stout vessel with a wide smokestack and an open-air bow popular with sunbathers, is all that remains of a ferry fleet that hauled railcars across the lake for more than a century. Most of the boats met a sad ending in scrap yards by the late 1980s. The Badger survived when an entrepreneur refurbished it for leisure travel.

The 410-foot ship now has dining areas and a movie lounge as well as many original features, including a mechanism that allows the captain to transmit orders to engineers below decks by moving brass levers on a dial. Rates vary, but a one-way trip for a family of four and their vehicle comes to about $200.

Many townspeople are relatives or friends of former crewmembers. Others have fond memories of riding the ferries with parents or grandparents.

“The Badger has always been part of their lives and their experience of being here in Ludington,” Mayor John Henderson said.

But it’s not always easy to keep one foot in the past while meeting modern standards.

Regulators four years ago gave Lake Michigan Carferry, which runs the Badger, until this December to change its ash disposal method or fuel type. The company says it’s working on a switch to natural gas but needs more time to retrofit the craft, which launched in 1953. Senior chief engineer Charles Cart says it could take up to five years.

Lake Michigan Carferry insists there’s little if any harm from the coal ash, which is mixed with water to form slurry and piped overboard. It says an EPA-certified lab found the material is hundreds of times below hazardous levels.

Tinka Hyde, water division chief with EPA’s Chicago regional office, said the agency has questions about the tests and will review the Badger’s application for an extension.

“If they want to continue to operate, they will need to be in compliance with the Clean Water Act,” Hyde said.

Environmentalists say the contaminants add up over time. And supporters of a rival company say the Badger shouldn’t expect special treatment. “They’re putting almost 8,000 pounds of ash a day into Lake Michigan,” said Steve Warmington, mayor of Muskegon, a city 60 miles south where a diesel-powered ferryboat called the Lake Express is based. “There’s no way in the world you can convince me that’s good for the lake.”

Badger backers say the Muskegon mayor wants to scuttle a competitor, which he denies.

In Ludington, businesses say grounding the Badger would be devastating. It hauls about 100,000 passengers and 30,000 vehicles a year, and many riders stay around long enough to shop, dine or stay overnight. A study by West Shore Community College near Ludington said the ferry pumps $35 million a year into the economy.

“I care about our lake. But the carferry isn’t doing that much damage,” he said. “If there was one dinosaur left, would we kill it off just because it wasn’t mixing in just right?”

A large, hand-painted Badger mural decorates the outside wall of Jerry and Sally Cole’s downtown antique shop, where ferry memorabilia are on display in glass cases—placemats, playing cards, matchbooks.

“There are a slew of people who collect these things,” Sally Cole said. “It shows how much the Badger means to the area.” 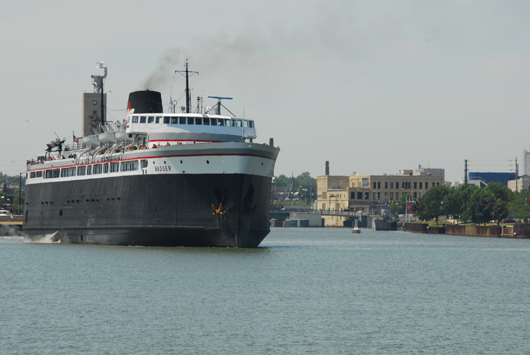 The S.S. Badger getting under way in Manitowoc, Wis. The car ferry connects the eastern and western segments of U.S. Route 10. This file is licensed under the Creative Commons Attribution 2.5 Generic license.