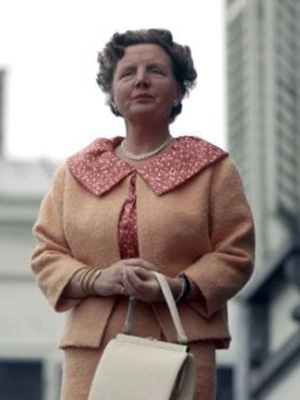 AMSTERDAM (AP) – From threadbare armchairs to marble mantel clocks, garden furniture to a silver pocket knife, thousands of the late Dutch Queen Juliana’s possessions are going under the hammer in an attic sale fit for a king.

The four-day auction by Sotheby’s started Monday and was stirring interest among serious collectors as well as die-hard Dutch royalty fans of the popular House of Orange.

A total of 1,725 lots gathered from seven royal palaces were being auctioned with the proceeds going to four charities – one chosen by each of Juliana’s four daughters.

“It’s really like a royal attic sale,” auctioneer Mark Grol told The Associated Press. “With paintings to prints, ceramics, silver, furniture. Just basically everything you would find in a palace.”

The sale is intended to clear out unwanted belongings that were left over after Juliana’s estate was divided among her daughters following her death in 2004 at age 94.

Some 10,000 people come on viewing days last week at the Sotheby’s office in Amsterdam, shuffling through a maze of oak tables, mahogany and satinwood chairs, and giant chandeliers. Walls were lined with oil and watercolor paintings.

To underscore the royal provenance, photos showed some of the lots in use at the palaces they came from.

One photo showed Queen Juliana, her husband Prince Bernhard and their four daughters, including present Queen Beatrix, eating breakfast at Soestdijk Palace using a service being auctioned with a presale estimate of euro3,000-euro4,000 ($4,185-$5,580).

Henk Stam, 69, who visited the auction aiming to buy 19th-century chairs, said royalists would push up the prices on some lots.

“As soon as you see a J or W on the underside of a chair the interest increases,” he said, referring to the stamps of Queen Juliana or one of the three Dutch King Williams.

Grol said that only after the first 213 lots were up for grabs on Monday would there would be an indication of how far over the presale minimum estimate of about euro1.5 million ($2.07 million) the auction would go.

He said interest was high not just from the Netherlands, but also from the U.S., Russia and China.

Early bidding was brisk, with a combination of online, telephone and auction room bids pushing up the price of the first lot, a quintessentially Dutch watercolor of skaters on a frozen waterway by Jan Anthonie Langendijk to euro5,250 ($7,309) including buyer’s premium. The estimate was euro1,000-euro1,500 ($1,377-$2,066).

Those in the room wanting to bid were given cards – orange, of course – with a bidder’s number on it.

There appeared to be some royal bargains on offer, with the cheapest lot an oak writing desk with an estimate of just euro25-50 ($35-$70).

“Some items will go for a reasonable price, but we have a lot of interest both from collectors and people who want to buy a souvenir from the royal family who’s very popular in the Netherlands,” Grol said.

Royal fans were likely behind lively online bidding for a pine box with “Z.K.H. Prins der Nederlanden stal Soestdijk,” meaning “His Royal Highness Prince of the Netherlands Soestdijk Stable,” painted on the lid.

One bidder who described himself as a collector and a royal fan said he hoped to buy some antique porcelain.

“I have the same problem as the royal household,” said the man, who declined to give his name. “Where do I put it all?”

Royal wedding a business boom or drag on the British economy?