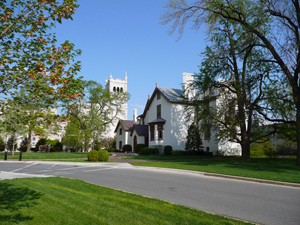 Lincoln Cottage with the main building of the Armed Forces Retirement Home in the background. Image by Hij. This work has been released into the public domain by its author at the wikipedia project.

WASHINGTON (AP) – Whether you’re interested in Lincoln the president or Lincoln the movie, Washington is a downright thrilling destination.

Abraham Lincoln was the 16th president of the United States and one of the country’s most admired, rising from humble roots in a frontier cabin to become a self-educated lawyer and brilliant politician. As president, he ended slavery by issuing the Emancipation Proclamation and preserved the nation despite the Civil War. The story of his assassination is one of the best-known chapters of American history.

Many museums are offering special exhibits for the 150th anniversary of the Civil War and the Emancipation Proclamation. Other sites can be visited any time: the Lincoln Memorial, the cottage where he summered, Ford’s Theatre, where he was shot, and the Petersen House, where he died.

LINCOLN MEMORIAL: This larger-than-life white marble statue of Lincoln, completed in 1922, sits inside a massive columned building. The design, according to the National Park Service, was inspired by the Parthenon, the ancient Greek temple that is considered the birthplace of democracy. About 6 million people visit the memorial each year. Even on a cold winter day, the steps are crowded with visitors from around the world taking pictures and speaking many languages. Located on the National Mall, http://www.nps.gov/linc/ .

FORD’S THEATRE AND PETERSEN HOUSE: Lincoln was shot at Ford’s Theatre in 1865 while watching a play with his wife, Mary Todd Lincoln. He was brought to a house across the street, now a museum and historic site called the Petersen House. You can see the room where he died and where his war secretary, Edwin Stanton, was said to have uttered the famous words: “Now he belongs to the ages.”

A visit to Ford’s and the Petersen House reveals fascinating details of the crime: The assassin, John Wilkes Booth, an actor as famous in his day as Justin Bieber or George Clooney, walked right up to the box where Lincoln was sitting and shot him in the head. He then leapt to the stage, ran out and fled by horse. Booth was hunted down and shot in a barn 12 days later. A plaque marks the site of a nearby boardinghouse where conspirators were said to have plotted the assassination; the building at 604 H St. (originally 541 H St.) is now a restaurant. The boardinghouse owner, Mary Surratt, was hanged.

Within 16 months of the assassination, Ford’s Theatre closed and the federal government bought the building. The interior was ripped out and turned into offices. In 1933, the National Park Service acquired the building as a site of historic significance. In 1965, President Lyndon Johnson sanctioned the restoration of a working theater and the interior was recreated to look the way it did when Lincoln was shot. Every president since 1968 has attended a show here, though they now sit near the stage, not in the box. Exhibits at Ford’s and at Petersen House include Booth’s diary and pistol, Lincoln’s shawl, campaign memorabilia and photos.

Located at 511 10th St., NW, http://www.fordstheatre.org/. Hours vary, depending on show schedules. Tickets do sell out. Tickets for a self-guided walk-through of Ford’s and Petersen House bought through Ticketmaster including fees are $9.75.

PRESIDENT LINCOLN’S COTTAGE: This was Lincoln’s summer home, where he and his family escaped Washington’s heat and humidity. Located on a breezy hill three miles from the White House, it was the 19th century equivalent of contemporary presidential retreats like Camp David. A statue of Lincoln and his horse evoke his daily half-hour commute to the White House on horseback. He first visited the house three days after his inauguration and last rode to the site the day before he was shot.

Wagonloads of furniture were brought here each summer from the White House. But unlike many historic sites, the house today is not filled with furniture or personal items, and that’s the point. Guided tours of the mostly empty rooms emphasize Lincoln’s ideas and the people he encountered during his stays here and on his daily rides, from favor-seekers and foreigners to former slaves and soldiers. You’ll stand in the room where he read Shakespeare and the Bible, hear about his meetings with the secretary of war, see the view from the porch that once offered a clear sightline all the way to downtown Washington, and walk up the stairs where his footsteps were heard when he couldn’t sleep. Through April 30, an exhibit here displays one of just 26 existing signed copies of the Emancipation Proclamation.

SMITHSONIAN’S NATIONAL MUSEUM OF AMERICAN HISTORY: Lincoln’s famous top hat, brown and glossy with age, is currently on display here in the “Changing America: The Emancipation Proclamation, 1863 and the March on Washington, 1963” exhibit (second floor east through Sept. 15). Lincoln was tall at 6 foot 3 and the hat made him even taller. He wore the hat to Ford’s Theatre the night he was murdered.

The “Changing America” exhibit portrays the sweep of history from the abolition of slavery to the civil rights movement. When Martin Luther King Jr. made his famous “I Have a Dream” speech during the March on Washington, he stood at the Lincoln Memorial and echoed Lincoln’s famous Gettysburg Address, which began, “Four score and seven years ago.” King’s opening line: “Five score years ago, a great American, in whose symbolic shadow we stand, signed the Emancipation Proclamation.” (Score is an archaic term for 20 years.)

Another treasure is in the museum’s “The First Ladies” exhibit (third floor): Mary Todd Lincoln’s purple velvet gown with white satin piping, mother of pearl buttons and an enormous hoop skirt. The dress was made by her seamstress and confidante, Elizabeth Keckley, an African-American woman who had purchased her own freedom. “The American Presidency: A Glorious Burden” (third floor east) highlights other Lincoln objects including hand casts made two days after he was nominated for presidency, showing his right hand still swollen from shaking so many hands. Uniforms, weapons and other Civil War relics can be seen in “The Price of Freedom: Americans at War” (third floor east).

SMITHSONIAN AMERICAN ART MUSEUM AND NATIONAL PORTRAIT GALLERY: “The Civil War and American Art” (first floor west), on display through April 28, offers paintings portraying what the museum describes as the “transformative impact of the Civil War and its aftermath.” An 1865 landscape painting of Yosemite Valley notes that Lincoln set aside the California wilderness as America’s first federally protected park. Other works show scenes of soldiers. Many of the most thought-provoking images depict African-Americans fleeing slavery or contemplating their new postwar lives. The exhibit includes paintings by some of the era’s most important artists, Winslow Homer, Eastman Johnson, Frederic Church and Sanford Gifford.

In the National Portrait Gallery, you’ll find a photo made of Lincoln in a local studio in 1865, a painting of the president by George P.A. Healy, and plaster casts of Lincoln’s face – one made early in his tenure, another made later showing the toll the war took on his gaunt features – along with casts of his hands.

NEWSEUM: An exhibit here called “Blood and Ink: Front Pages From the Civil War” displays more than 30 front pages from the era, from the founding of the Confederacy through Lincoln’s death. “A Nation Mourns,” reads one headline. 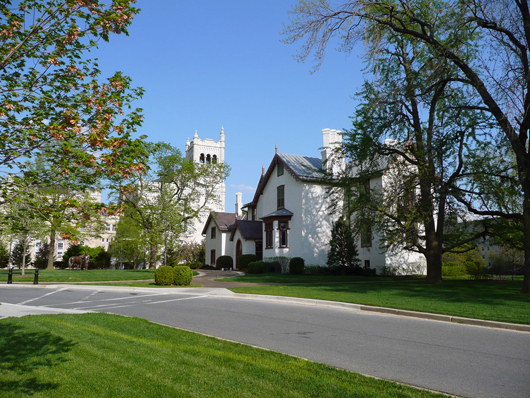 Lincoln Cottage with the main building of the Armed Forces Retirement Home in the background. Image by Hij. This work has been released into the public domain by its author at the wikipedia project.