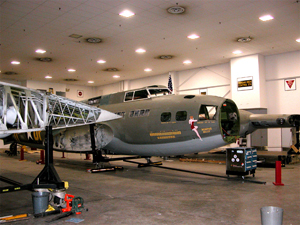 The Memphis Belle B-17 during restoration. The famous Flying Fortress is now at the National Museum of the U.S. Air Force in Dayton, Ohio. U.S. Navy photo by Susan Hyback, courtesy of Wikimedia Commons.

MEMPHIS, Tenn. (AP) – War veteran Bill Jamison fought back tears during the Sunday dedication of a memorial honoring the Memphis Belle, the storied B-17 bomber that flew 25 crucial missions over German-occupied Europe in World War II.

Jamison and about 80 other people watched the unveiling of the monument depicting the 10-man crew standing in front of the historic airplane, which survived the war and spent 59 years in Memphis before being moved in 2005 for restoration at the National Museum of the U.S. Air Force in Dayton, Ohio.

It sits with other military statues and memorials at Veterans Plaza in Overton Park and also features a statue of longtime Memphis resident Margaret Polk shielding her face as she looks up at the sky.

The airplane’s pilot, then-Lt. Robert Morgan, named the Memphis Belle after Polk, who was his sweetheart before he deployed for war.

Jamison, 80, and other members of the Memphis Belle Memorial Association spent years working to restore the bomber while it was in Memphis. Her symbolic return in the form of the monument drew emotions from some in attendance who fought to keep the Belle in Memphis.

“It’s a dream come true,” said Jamison, an Army veteran who served in the Korean War. “I cried when the plane left. In fact, I’ve got tears in my eyes, now.”

Built by Boeing, the Belle was one of the first B-17s to complete its 25 missions over German-occupied Europe. It flew at a time when heavy bombers often flew without fighter escorts.

The bomber had a painting of a leggy woman on its nose, in honor of Polk. Morgan chose the artwork from a 1941 illustration in Esquire magazine, according to the Air Force.

Polk, a lifelong Memphis resident, died in 1990. Morgan, of Asheville N.C., died in May 2004. The two split up shortly after Morgan’s return from Europe.

After the Belle’s final mission in May 1943, its crew came home for a nationwide bond-selling tour, cementing it as a wartime symbol of courage and sacrifice. Younger generations learned about the bomber from the 1990 movie Memphis Belle.

The Belle had been given over to an agency that disposed of surplus military equipment in 1946 when a group of private citizens, led by WWII veterans, managed to get it in flying condition and brought it to Memphis. But age, weather and vandalism took its toll. The Belle was in serious disrepair when the association was formed.

Restoration work continued until Oct. 5, 2005, when the Belle was transferred to the Air Force. The move disappointed volunteers who worked on the aircraft while it was in Memphis, said George Barnes, the association’s president.

“People were hurt that she was gone, but they realized the Memphis Belle in the National Museum of the U.S. Air Force would be seen by millions of people,” Barnes said. “In the long run, it’s better for the Belle to be where she is.”

Belle association members stay in touch with the Air Force and receive updates on the restoration, which could be finished in two years, said Andrew Pouncey, the group’s past president. Restorers are currently working to lower the bomber’s landing gear.

Speakers at Sunday’s unveiling said it’s important for people to remember the Memphis Belle as a tough, resilient aircraft that protected its young crewmen from air and ground fire while dropping its bombs on strategic targets in Germany and France.

“We need to recognize the sacrifice and educate the children that are coming along to the fact that we are a free nation partly because of what they did,” Barnes said.