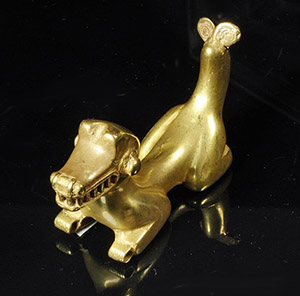 This fine example of Pre-Columbian gold artistry dates to 800-1500 A.D. Of a high-karat yellow gold, the piece is crafted in the form of a fierce, crouching reptile with beady eyes. Image courtesy of LiveAuctioneers and Antiquities Saleroom.

VERACRUZ, Mexico (AP) – Gulf-coast fisherman Raul Hurtado is a local legend, the man who found and lost millions of dollars’ worth of Aztec gold almost four decades ago, was tossed in prison, then found peace making $150 a month selling octopus and other seafood from a thatched-roof shack.

Now, Hurtado is back in the public eye because he’s at risk of losing even the modest livelihood he earns on a small patch of beach known as Punta Gorda. The government plans to expand Veracruz port and make it one of Mexico’s largest freight terminals, a move that threatens to evict him and dozens of others who have sold fish on the beach for decades.

It’s the latest twist in a life that has had some wondering over the years whether Hurtado has been the luckiest, or unluckiest, fisherman ever.

“It was a story that impacted us for days and months,” said Veracruz resident Enoch Rodriguez. “And it was also sad.”

Thirty-eight years ago, Hurtado discovered what became known as “The Fisherman’s Jewels” while looking for octopus in the shallow water of the coastal reefs of Coral de Enmedio. He saw a glitter of gold on the ocean’s sandy floor. It was a gold ingot, lost long ago in a shipwreck and uncovered by ocean tides.

Hurtado said he returned to the same place a year later, in 1976, “and I found another piece, also buried.”

“It was bigger than the other bar, and when I pulled on it, I moved the sand with my hand, and that is when all the jewels began to appear,” said Hurtado, 64. Altogether, he found 42 pre-Columbian gold pieces, including bracelets, pendants and cloak ornaments.

Unaware of their worth, Hurtado sold a few pieces. “With the small amount of money I got, I bought a few little things — a bed, new tin roofing for my house.”

He kept the rest. Punta Gorda residents remember Hurtado’s children attaching the gold ingots to a string and pulling them around the beach like playthings.

The fisherman said he later learned the gold had an incalculable value, and was a national treasure. But, until then, “For me, they were like toys.”

Things turned bad when an acquaintance reported Hurtado to authorities, who seized the artifacts and charged him with “looting the nation.” He said police beat him and accused him of being a thief, and seized some of the pieces. He spent more than a year in prison.

Mexico’s Supreme Court acquitted Hurtado in 1979, ruling he didn’t know that the find was a national treasure or that he was required to report it. “Ignorance, and not knowing how to read or write, that was my only crime,” the fisherman said.

Now, the local port authority is offering jobs to Hurtado and the other seafood vendors if they’ll leave the beach to make way for the expansion. Hurtado said he’s too old to learn a new skill. “I’m going to be 65,” he said. “I don’t think there will be work for me.”

He’s appealing to President Enrique Pena Nieto to prevent the evictions, and several environmental groups have joined the cause, saying the port will damage one of the area’s most important coral reefs. An appeals court is considering the case.

Hurtado said he turned his life around after he found and lost the gold treasure. He married the mother of his seven children in a church wedding and has supported his family with the modest earnings from the shack.

The gold pieces are now in a museum in one of Veracruz city’s old Spanish-era forts, the Baluarte de Santiago. The exhibition doesn’t even credit Hurtado by name, saying only that the gold was “seized from a fisherman who found it in the bottom of the sea.”

“It was a discovery that everyone says was great, but for me it was nothing,” Hurtado said.

Copyright 2013 The Associated Press. All rights reserved. This material may not be published, broadcast, rewritten or redistributed. 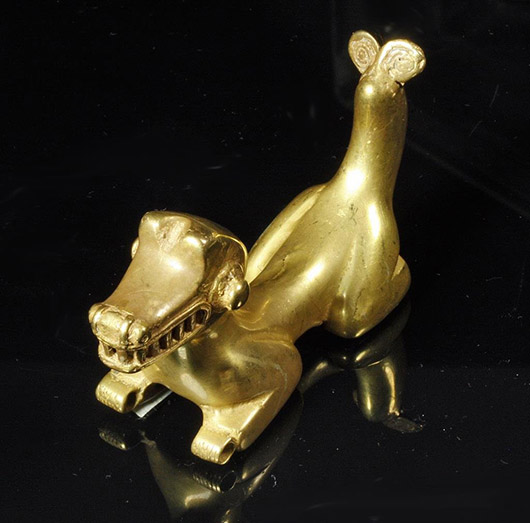 This fine example of Pre-Columbian gold artistry dates to 800-1500 A.D. Of a high-karat yellow gold, the piece is crafted in the form of a fierce, crouching reptile with beady eyes. Image courtesy of LiveAuctioneers and Antiquities Saleroom.