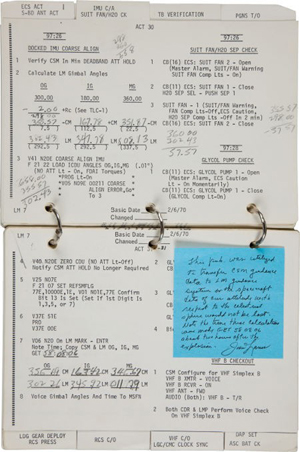 MIAMI (AP) – NASA is questioning whether Apollo 13 commander James Lovell has the right to sell a 70-page checklist from the flight that includes his handwritten calculations that were crucial in guiding the damaged spacecraft back to Earth.

The document was sold by Heritage Auctions in November for more than $388,000, some 15 times its initial list price. The checklist gained great fame as part of a key dramatic scene in the 1995 film Apollo 13 in which actor Tom Hanks plays Lovell making the calculations.

After the sale, NASA contacted Heritage to ask whether Lovell had title to the checklist. Greg Rohan, president of Dallas-based Heritage, said Thursday the sale has been suspended pending the outcome of the inquiry. The checklist, he said, is being stored for now in the company’s vault.

Rohan said Lovell provided a signed affidavit that he had clear title to the ring-bound checklist, which is standard procedure. Heritage does robust business in space memorabilia and this is the first time NASA has ever raised questions about ownership of its items, he added.

“It’s one that is near and dear to our hearts,” Rohan said of the space collectibles business. “We, like a lot of people, consider these astronauts to be national heroes.”

The latest inquiry follows a federal lawsuit NASA filed last year in Miami against Apollo 14 astronaut Edgar Mitchell seeking return of a camera he brought back from his 1971 moon mission. That lawsuit was settled in October when Mitchell agreed to give the camera to NASA, which in turn is donating it to the National Air and Space Museum in Washington.

“It’s a challenge to continually monitor the growing auctions community, which is usually how these items come to light,” he said in an email. “This latest issue demonstrates a need to reach out to former astronauts and other former agency personnel who may have these kind of items.”

Lovell, 83, lives near Chicago and owns a restaurant bearing his name in Lake Forest, Ill. In an email Friday to The Associated Press, the former astronaut said he is “seeking a meeting with NASA administration to clear up this misunderstanding.” He did not elaborate.

The Apollo 13 moon mission was aborted about 200,000 miles from Earth when an oxygen tank exploded on April 13, 1970, causing another tank to fail and seriously jeopardizing the three-man crew’s ability to return home. Astronaut Jack Swigert famously said “Houston, we’ve had a problem here” after the explosion.

The crew was forced to move from the command ship into the attached lunar landing module for the return flight. Lovell’s calculations on the checklist were key in transferring navigation data from the command craft to the lunar module.

NASA has raised questions about title rights for three other space items Heritage had sold in the same November auction. Two were from Apollo 9 astronaut Rusty Schweikart: a lunar module identification plate that brought more than $13,000 and a hand controller that received a $22,705 bid. The space agency also targeted a fourth item, a hand glove worn by Alan Shepard during training for Apollo 14, that brought more than $19,000.

In an email to Heritage, NASA Deputy Chief Counsel Donna M. Shafer said there was no indication the agency had ever transferred ownership of any of the items to the astronauts.

“Only NASA has the authority to clear NASA property for sale,” Shafer said in the email, which was provided by NASA to The Associated Press.

She said the matter has been turned over to NASA’s Office of Inspector General, adding that “there is potential risk of the items being seized by the government until title issues have been resolved.”

In the Mitchell lawsuit, his attorney argued prior to the settlement that NASA officials told astronauts long ago they could keep certain equipment from the missions, and many such items wind up on auction house lists. A 1972 NASA memo seems to back up that claim, requiring only that the astronauts provide the agency with lists of items in their possession.

Apollo 15 astronauts were reprimanded after they took unauthorized, special envelopes to the moon with stamps that were given a special postal marking shortly after their return in 1971. They had a deal with a German stamp dealer who later sold them for $1,500 each.

Last month, the NASA inspector general reported that since 1970, more than 500 pieces of moon rocks, meteorites, comet chunks and other space material have been stolen or gone missing. The report said NASA needs to keep better track of some 26,000 samples sent to researchers and museums or the agency runs greater risk they will be lost. 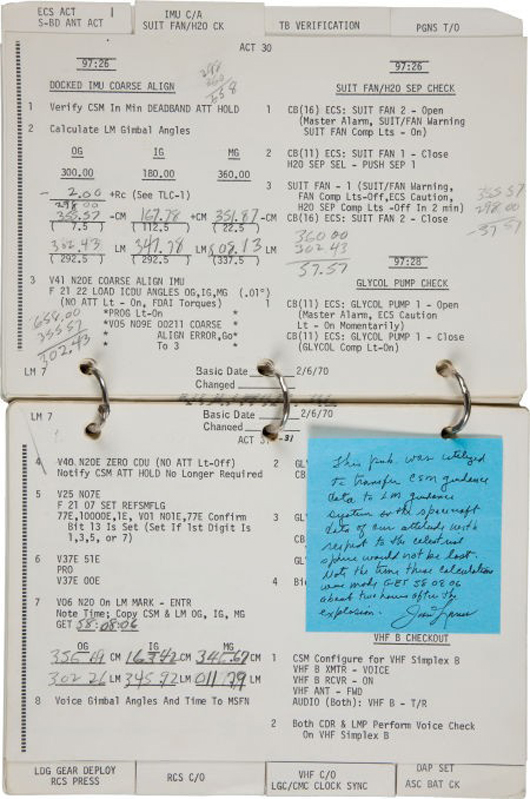 Iowa antique mall reopens after a summer of flooding