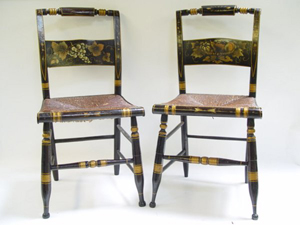 A pair of Hitchcock chairs with stenciled decoration. Image courtesy of LiveAuctioneers Archive and Estates Unlimited.

The Hitchcock Chair Co., founded in 1818 and based in Riverton, Conn., closed in 2006, and sold all its equipment, patterns and furniture parts at auction. One of the factory buildings was bulldozed.

Today, a reincarnation of the company that once gave the town its name, and once produced 15,000 chairs a year, is producing new furniture using the original patterns and designs.

“We believe this will be a niche business,” said Rick Swenson, who with partner Gary Hath is the new owner of the Hitchcock Chair Co. Ltd. “This is a high-end, high-quality, American-made product.”

Swenson, 53, had been an antiques restorer and furniture maker for years, and began doing Hitchcock restorations in 2005. After the company closed, officials kept referring customers seeking repairs to him and, in late 2006, Swenson opened Still River Antiques with his wife, Nancy, in the company’s old sample shop.

Repairs and restorations kept Swenson busy. He hired former Hitchcock employees to strip the old finishes, replace broken spindles and legs, and touch up the stenciling. Whenever he could, he bought old Hitchcock pieces and restored and sold them, but when customers wanted a specific piece of furniture – a chest or a table, Swenson was unable to satisfy them. “It was hurting business,” he said.

Three years ago, when Swenson learned that thousands of spare Hitchcock parts – legs legs, spindles and tabletops – were available, he bought all seven tractor-trailer loads.

In March 2010, he and Hath learned that they could buy the Hitchcock company archives, which amounted to 400 boxes of patterns, customer lists, blueprints, stencils and the right to use the Hitchcock name. They paid about $100,000 – a fraction of what the business was worth in its heyday.

Over the next 18 months, they developed a business plan to manufacture new Hitchcock furniture, and opened for business in September. In the showroom, new chests, tables and mirrors sit alongside a restored 1830s chair that is indistinguishable from a new one. A storeroom contains dozens of chairs awaiting restoration. In back are several workrooms where employees are fashioning new pieces.

The past few months have been busy. After doing several open houses and a round of autumn fairs in the area, “We are already starting to see growth potential,” Swenson said.

Hitchcock chairs, tables, desks and chests were made of clear maple or cherry, or painted black, white or green. Rush seats were handwoven with cattail leaves.

Many pieces were easily recognized by iconic stenciled pictures of fruit, or scenes of winter or Thanksgiving.

Historically, the furniture was moderately priced because the company’s founder introduced methods of mass production that he had learned from Bristol clock maker Eli Terry.

Instead of having one craftsman custom-build an entire chair or table, Hitchcock made each worker responsible for one task. Parts were interchangeable. Assemblers put the pieces together, and finishers applied paint. Instead of painting an image, they used stencils and applied metallic paint to the sticky varnish.

As a result, the furniture was affordable – and popular. Thousands of designs were created, and in later years, the company offered limited editions, including a series depicting tall ships, the Bicentennial and college insignia. New stencil designs were issued each holiday season.

Swenson and his eight employees are producing furniture using the traditional Hitchcock designs. Six of them are former Hitchcock employees, including Lorraine Lacasse, 76, who began as a sander in 1960, switched to stenciling and worked until the factory closed. “When you were hired at Hitchcock, you stayed there,” she said. Today, she works two days a week, using as many as 18 stencils for a Christmas chair.

Swenson plans to open a 5,000-square-foot plant in Winsted within the next few weeks, and expects to add two more employees by the end of the year. “We are growing very slowly, very carefully,” he said. Some work, like spindle turning or steam bending, is done in Vermont.

The Hitchcock factory closed in 1866 because of problems caused by the high cost of transporting the finished pieces to stores. In 1946, Hartford businessman John Kenney, who was fishing nearby, saw the abandoned factory and revived the company. When it closed in April 2006, President Ronald Coleman attributed the loss of business to competition from low-wage countries like China.

Transportation is still a problem, but Swenson is hoping to establish a network of distributors throughout the country so that he can ship in bulk. He is also hoping that Riverton might once again become a destination for furniture lovers. “The company has always been here. The first question (customers ask) is, Where are you making it?” he said. “They want it to be made in the U.S. and made here.”

So far, Swenson’s operation hasn’t grown too big for the personal touch. He’s currently restoring an armchair that has a baseball motif and a Yankees stencil for the office of a Yankee fan who moved to Massachusetts. When done, the chair will sport a Red Sox logo.

Furniture Specific: Look out for that ‘Cheire’