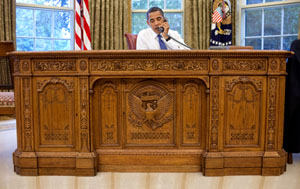 BOSTON (AP) – As a little girl, Caroline Kennedy hung out at her father’s desk while he worked in the country’s most famous office. Now the library she works with to preserve her father’s memory is introducing a way anyone can sit – virtually – at John F. Kennedy’s desk and learn more about his life and administration.

The Museum at the John F. Kennedy Presidential Library in Boston has unveiled a new online feature, The President’s Desk.

The interactive desktop has numerous objects Web visitors can click – a telephone, a campaign button, a secret recording button – and get video, audio and text from JFK’s era, she said.

“I hope users will feel they are sitting at the president’s desk themselves and will be excited to bring history to life in this dynamic setting,” said Caroline Kennedy, president of the John F. Kennedy Library Foundation. “My parents shared a love of history, and I know they would have enjoyed this exhibit themselves.”

The online feature was introduced in front of a replica of the desk.

The original desk was made from the timbers of the British ship the HMS Resolute and was given to President Rutherford B. Hayes by Queen Victoria in 1878. Still used by President Barack Obama, the original desk was in the White House broadcast room until JFK’s wife, Jacqueline Kennedy, discovered it and had it installed in the Oval Office in February 1961.

The virtual version has seven clickable objects, each of which holds various layers of information.

Clicking the telephone, for instance, pulls up a list of recorded conversations, and a user can listen to the president talk to his brothers Robert Kennedy and Edward Kennedy.

The campaign button reveals a picture of his campaign headquarters and video from his run for office.

Hitting the secret recording button gives access to transcripts and sound from high-level discussions on the Cuban missile crisis and Vietnam.

Other objects hold information about Kennedy’s family, his military service and his love of the sea.

The President’s Desk can be found at JFKLibrary.org. 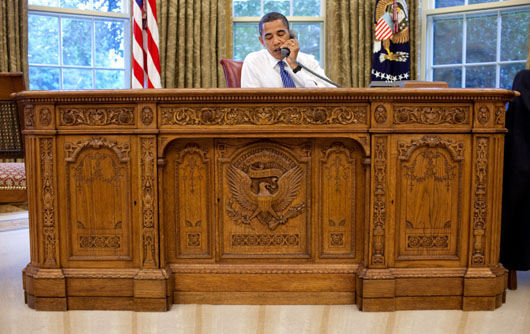 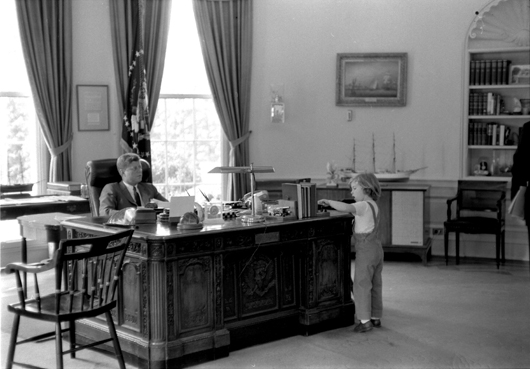