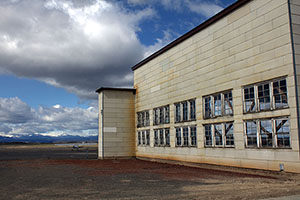 Originally known as Madras Army Air Field, this was a World War II Army Air Corps training base for B-17 Flying Fortress and Bell P-63 Kingcobras. Image by Tedder. This file is licensed under the Creative Commons Attribution-ShareAlike 3.0 Unported license.

MADRAS, Ore. (AP) – The Madras Municipal Airport has many features that hearken back to its former use as a U.S. Army air base during World War II.

But none are as intact and reminiscent of that era as a wood aircraft hangar used by the army for servicing the Boeing B-17 Flying Fortress.

In 1943, squadrons took the heavy bombers up into the Central Oregon sky to train for campaigns against German targets in western Europe and Japanese supply lines in the Pacific.

The Madras airport has two B-17 hangars from that period, one on the north side of the general aviation building and another on the south. Located off NW Cherry Lane, the south hangar has been modified over the years, whereas the north has remained nearly untouched for 70 years.

Last week, the Madras City Council approved an application to nominate the north hangar for the National Register of Historic Places, a move that would allow the city to obtain grants to fix the aging wood structure if it is chosen for listing.

The application will undergo a review by the Oregon Parks and Recreation Department and then be forwarded to the National Park Service, which recommends approval and eventual listing for submissions.

Rob Berg, the airport manager, said the listing would be significant in recognizing what the city and Jefferson County meant to the war effort. The documented history of the air base has been largely lost because of secrecy surrounding its purpose at the time.

Although the airport rents out the north hangar for monthly storage of Cessna and other small aircraft, the interior still resembles the workspace it was from 1943 to 1945.

The 10,000-square-foot hangar, likely constructed with lumber from local mills, still has pieces of history inside. Hand-painted wood signs hang above window bays warning soldiers not to smoke inside and indicating service sections within the hangar. In the rafters, there are still mud footprints from when the hangar was constructed, Berg said.

The hangar could accommodate only one B-17 at a time because of the bomber’s more than 100-foot wingspan. In August 2011, a restored B-17 called “Sentimental Journey” was put inside the hangar during a storm after the Airshow of the Cascades event. The plane fit snugly inside like countless others during the war.

“It was quite a special moment. Everybody was just kind of quiet sitting there,” said Berg, about seeing it inside the hangar.

Jerry Ramsey, president of the Jefferson County Historical Society, has childhood memories of military personnel swarming Madras on the weekends and the large planes flying above.

A 7-year-old at the time, Ramsey said it felt as if the region was “really part of the war.” Local residents were not allowed near the base, although everyone was familiar with what was happening there.

“They were constantly landing and taking off,” Ramsey said. “The noise level was terrific.”

Ramsey’s family lived near John Brown Canyon, northwest of Madras, which turned out to be a favorite spot for some daring pilots. He remembers one day when planes flew right over his house after pulling out of the canyon.

“I heard just a wall of sound,” said Ramsey. “It was so loud it rattled the windows.”

In 1944, the army began using the base for training pilots in smaller fighter planes. No one was allowed to take pictures of the base or planes, according to Ramsey, and not many documents remain about the base’s history, which made the application process difficult.

Michele Quinn, the city’s public works administrative assistant, researched the hangar’s history along with interns from the state parks and recreation department. She contacted nearly every museum that had information about World War II air bases.

“They all knew that we existed, but didn’t have actual copies of anything,” she said. “A lot of it had been destroyed or ruined.”

Quinn was eventually able to find old telegrams indicating what the airport was used for, which was needed to prove the hangar’s historical significance.

Quinn wasn’t able to get anything from the army about the base. However, Ramsey provided some anecdotes from his childhood and helped Quinn put together pieces that led to finding other helpful information.

The hangar is structurally significant because of its wood frame, but it also requires more attention. Some alterations, such as a new roof, have been made to make sure the hangar isn’t damaged by rainfall.

“If you don’t keep the water out of them they’re going to rot really fast,” said Berg. He added that he is thankful the city has taken the initiative to maintain both hangars.

Quinn is confident that listing the hangar will result in more grant opportunities. In recent years, the city has looked at federal grants for the building but were unable to apply without a National Register designation. 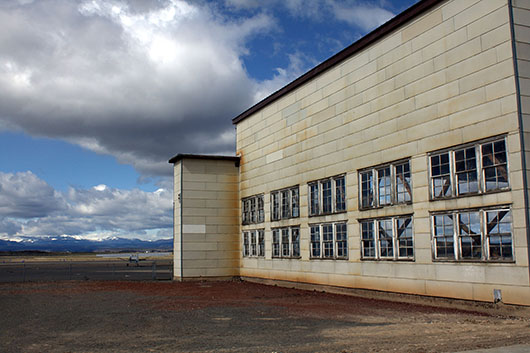 Originally known as Madras Army Air Field, this was a World War II Army Air Corps training base for B-17 Flying Fortress and Bell P-63 Kingcobras. Image by Tedder. This file is licensed under the Creative Commons Attribution-ShareAlike 3.0 Unported license.