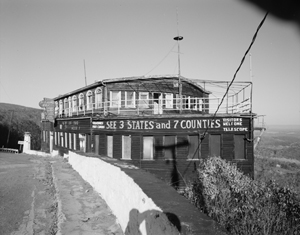 One landmark missing from the route through Bedford, County, Pa., is the Ship Hotel, which was destroyed in a 2001 fire. Image courtesy of Wikimedia Commons.

BEDFORD, Pa. (AP) – Generations of history are interwoven alongside the Lincoln Highway as it passes through Bedford County.

By making just a few stops, travelers can learn about Native American culture, Colonial times, 1940s-style lodging and 20th century marketing. There is an art deco landmark, a state park, a modern highway interchange in Breezewood to take drivers to the Washington D.C./Baltimore region, Fort Bedford Museum, the 1806 Old Log Church and a big ole coffee pot, too. Together, those elements have helped shape the county’s identity.

And they all have benefited from being located by the Lincoln Highway, which turns 100 years old on Thursday.

“The Lincoln Highway helped sustain the area,” said Dennis Tice, director of the Bedford County Visitors Bureau. “That was probably the biggest boom for traffic in the area.”

What might be the county’s most well-known Lincoln Highway attraction no longer exists.

In 1928, Herbert Paulson, a native of the Netherlands, built the castle-themed Grand View Point Hotel at a curve in the road, just east of Bald Knob Summit. The structure, which overlooked a natural expanse, was soon remodeled to look like an ocean liner and named the Ship Hotel. It was billed as a place where visitors could “See 3 States and 7 Counties,” as an old sign read. Calvin Coolidge, Thomas Edison, Henry Ford, J.P. Morgan and Will Rogers were among its famous guests. Following years of decline, the Ship Hotel burned to the ground on Oct. 26, 2001. No cause was ever determined.

“People from all over the world would come to spend time there,” said Gillian Leach, the Bedford County Historical Society’s executive director.

The hotel, like many attractions, was designed to catch the attention of travelers as they sped along in their automobiles.

Other local novelty buildings include The Coffee Pot, a structure shaped like an oversized coffee pot, and the art deco-themed Dunkle’s Gulf Service.

“It was pragmatic architecture,” said Tice. “How do you get people’s attention at 35 miles per hour?”

There are newer attention-grabbers, too. In the 2000s, the Lincoln Highway Heritage Corridor organized an effort to get murals painted on some roadside walls. One of the designs is located at The Bison Corral, a Schellsburg business that sells bison meat and handmade Native American items such as gourd ornaments, pottery, jewelry and knives.

Everett’s mural depicts several images, including a tribute to the Karns car, the first automobile built in the county by A.W. Karns and his son, W.C. Karns. Karen Brantner, an LHHC board member, feels the mural “adds to Everett’s small-town flavor.”

A few miles down the road, the Jean Bonnet Tavern, which opened circa 1760s, provides a glimpse into the earliest days of the United States. It was a gathering place for farmers involved in the Whiskey Rebellion and later for federal troops sent to quell the insurrection in western Pennsylvania.

Throughout numerous ownership changes, the building has been mostly used as an inn and tavern. It joined the National Register of Historic Places in 1979.

“There are more dining options than ever for travelers these days, but a visit to the Jean Bonnet Tavern is like a step back in time,” said the tavern’s current owner, Melissa Jacobs. “With hand-hewn chestnut beams, stone walls and wood burning fireplaces, it is not hard to imagine early settlers passing through. When visitors stop at the Jean Bonnet Tavern, it is more than just a food stop.

“Guests will read about the history, hear a ghost story from their server, tour the building, visit the cabin shoppe, look at the herb garden and feed the goats.”

Travelers also often stay at the Lincoln Motor Court, which features 12 refurbished cabins that still retain 1940s ambiance. It is the last motor court still in use on the Lincoln Highway, according to its owner, Bob Altizer.

“We’re too small to compete with the big boys,” said Altizer. “All we’ve got is charm, so we’ve got to run with it.”

Not far from the motor court, visitors and local residents can enjoy a rustic experience at Shawnee State Park in Juniata and Napier townships. The park, which opened in 1951, includes a 451-acre lake.

“I think that having a park improves the quality of our lives,” said Dorothy Krupa, manager of Shawnee. “It gives the people a place to go.” 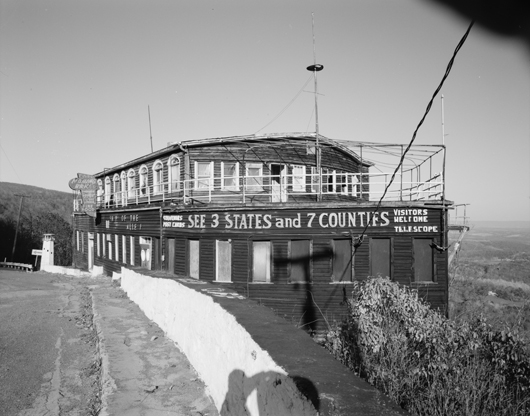 One landmark missing from the route through Bedford, County, Pa., is the Ship Hotel, which was destroyed in a 2001 fire. Image courtesy of Wikimedia Commons.