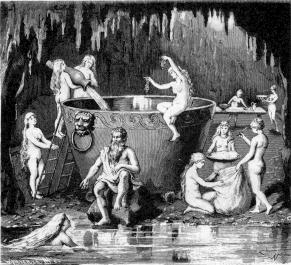 Ale was known in ancient times as "mead." In this 19th-century image from a Swedish translation of the Poetic Edda (Norse mythology), the nine daughters of Aegir and Ran are shown preparing a huge vat of ale.

BETHLEHEM, Pa. (AP) – Later this month, Chris Bowen of Bethlehem and a couple of his friends will lead a motorcycle expedition north – far, far north – to the Canadian Arctic, where they plan to set up a portable brewery and make 100 gallons of a hoppy, potent beer that is exceeded in richness only by its own fanciful history.

We’ll get back to Bowen in a moment, but first, the beer. It’s called Allsop’s Arctic Ale. The first people ever to drink it were British sailors dispatched to the Arctic by Queen Victoria in 1852 to discover the fate of an earlier expedition to that frozen realm.

They brought thousands of bottles of the beer, which had been specially crafted by Allsop’s Brewery with loads of hops and a bracing alcohol content – 12 percent, compared with 5 percent in your Budweiser – to ward off scurvy and withstand freezing.

Alas, the rescuers fared little better than the explorers they were sent to rescue. Led by Sir Edward Belcher, they were forced to abandon four of their five ships in the ice and return to England, where Belcher was court-martialed – though acquitted – for his failure.

That might have been the end of it, but one of the ships, the HMS Resolute, broke free from the ice and drifted thousands of miles into the path of an American whaling vessel, which towed it back to Massachusetts. It was restored at a Brooklyn shipyard and returned to the British as a gift. (Beams from the ship, incidentally, were turned into two desks: one for Buckingham Palace, the other for the Oval Office).

Now, back to Bowen. In 2007, the 43-year-old financial planner read about an eBay auction in which one of two bottles of Allsop’s Arctic Ale known to exist sold for $500,000.

It turned out to be a false bid, but Bowen – a craft beer brewer who has been honored with national awards and built his own private brew pub in a cottage near Stabler Arena – was hooked by the Allsop’s story. He set about investigating its history and, over the course of 21/2 years, discovered a couple of things. One was the second Allsop’s bottle, which he now possesses.

The other was the recipe for the beer.

“This was the Tang of its day,” Bowen said, likening Allsop’s to the powdered orangeade touted as the astronaut’s choice in the heyday of the space program.

Being the sort of man he is – a curious tinkerer with an adventurous streak – he decided the Allsop’s story needed to be told in dramatic fashion. He’s been riding a motorcycle for years, so a plan evolved: ride to the Arctic, brew the beer and turn the epic journey into a documentary film.

“How am I going to tell the story? I’ll tell it from the back of a motorcycle,” he said as he stood astride the burly BMW bike that will carry him from here to there.

You don’t do this sort of thing alone. Bowen asked friends, John Chay and Dick Gethin, to ride along, and enlisted the services of some Russian filmmakers whose work he had seen and admired at a Bethlehem film festival. Also on board are a Chester County photographer, Dan Savage, and Lance McKay, a motorcyclist and adventurer from Maryland.

They depart July 25 and expect to reach the shores of the Hudson Bay in about a week.

No doubt. In addition to the saddle-sore 2,000-mile ride with stops along the way at Indian villages, French Canadian breweries and other sites the team will have to set up Bowen’s portable brewery. They will spend two days brewing Allsop’s in its two 50-gallon vats about 500 bottles’ worth before heading home.

Because he isn’t a licensed seller, Bowen gave away his version of Allsop’s beer to promote the film during Bethlehem Brew Works’ July 8 “cask night.” The brew pub will also host an auction of antique beer memorabilia and other items to raise money for the project.

Information from: The Morning Call, http://www.mcall.com

Herb & Helen Haydock: the couple that made beer collecting famous