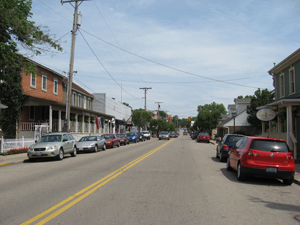 The annual Ohio Sauerkraut Festival will be held in downtown Waynesville, Ohio, on Oct. 12-13. Image by Ed! This work is licensed under the Creative Commons Attribution-Share Alike 3.0 License.

WAYNESVILLE, Ohio (AP) – In the northeast corner of the fourth-fastest growing county in Ohio, Waynesville stands as a testament to historic preservation.

Thirty years ago, the village council created a historic preservation district and board. Its powers include approving environmental changes to properties in the district such as construction and demolition.

Waynesville, a Warren County of 2,834 residents about 40 miles northeast of downtown Cincinnati, touts tourism as an important part of its economy,

Since the 1970s, the village has been called “the antiques capital of the Midwest,” based on its high concentration of antiques stores. The preservation board is often credited with remaining true to downtown’s historic charm.

“(The board has) maintained the integrity of the historic district,” said Pam Bowman, owner of the historic Hammel House Inn since 2002. “There’s always somebody that comes in that doesn’t get it. They want Wal-Mart down the street.”

The Hammel House dates to 1787 – 10 years before the village was founded – when it was a log tavern known as the Jennings’ House. The building replaced the tavern in 1817.

The Hammel House fits in well with the downtown, which is largely void of chain stores. Exceptions include a few restaurants – McDonald’s, a Subway, Bentino’s Pizza.

Dalton said the preservation board and antique dealers saved the community’s life and “preserved that illusion of small-town U.S.A. If they had not come along … (Waynesville) would’ve eventually become a ghost town.”

Bruce Metzger, an antiques show producer and owner of Queen City Shows, said Waynesville is arguably the top small-town destination in the area.

In Waynesville, Metzger said, a customer deals with the proprietor, something they won’t find in a big antique mall.

Linda Pelton, 66, of North Bend, Ohio, visits Waynesville two or three times a year to shop for antiques. She called the village “one of the best around within 100 miles or so” because of the density of shops.

Dawn Schroeder, executive director of the Waynesville Area Chamber of Commerce, said she’s visited other small towns that are “kind of shut up. There’s nothing left.”

In September, the Stone House Tavern opened on South Main Street. It’s the first restaurant in the village to serve alcohol by the drink since the 1940s.

Falls and the holidays are peak times for tourism, but shops are open year-round.

And the despite the recession, the downtown economy is stable with few vacancies. And Waynesville’s government has nearly healed itself from a self-inflicted budget crisis that resulted in the state placing it on fiscal emergency status five years ago.

Molly Forner, along with her husband, Jerry, own Forner’s Wood Shop. She said a lot of people will come on the weekend to shop and eat lunch at The Hammel House. In the summer, they might drive to nearby Caesar Creek State Park.

“It’s kind of a destination place,” she said. “Most of our customers are people that maybe they come to Waynesville two or three times a year … It’s not like running to the mall. It’s a treat.”

Information from: The Cincinnati Enquirer, http://www.enquirer.com 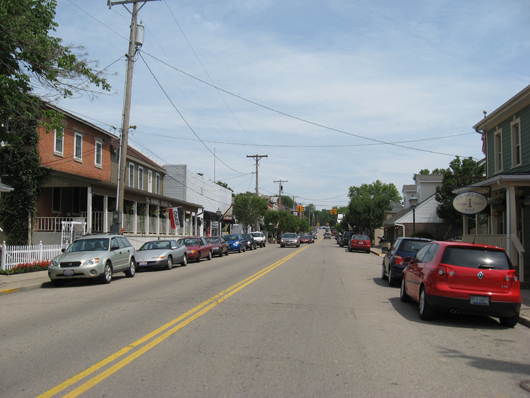 The annual Ohio Sauerkraut Festival will be held in downtown Waynesville, Ohio, on Oct. 12-13. Image by Ed! This work is licensed under the Creative Commons Attribution-Share Alike 3.0 License.