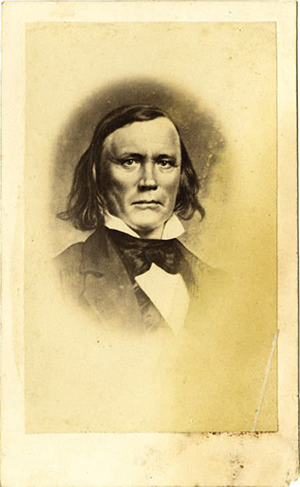 TAOS, N.M. – A proposal to change the name of Kit Carson Memorial State Park to Red Willow Park in the town of Taos met with such controversy, backlash and death threats that the name change has been put on hold.

The Taos Pueblo, a multi-storied structure surrounded by reservation lands, is the ancestral home to Native Americans and has a population of about 1,100 people. Others live in the town of Taos and beyond. The pueblo is located one mile north of the town of Taos, which has a population of about 6,000 people, a mix of Native American, Hispanic and Anglo.

Kit Carson lived in Taos in the mid 1800s and had a home there. He is referred to in various ways including “trapper, frontiersman, soldier, explorer and Indian agent.” A member of the U.S. military in the 1860s, he was ordered to remove Native Americans from their lands. One order resulted in the relocation of thousands of Navajo from their reservation to Bosque Redondo near Fort Sumner 300 miles away. This forced relocation became known as the Long Walk. Hundreds of Navajos died along the way or at Bosque Redondo before being allowed to return to their reservation in 1868. Carson also led the military to burn homes and crops in Canyon de Chelly on Navajo land.

Today, Navajos still talk bitterly of The Long Walk, and plaques at Canyon de Chelly describe the burning of homes, peach trees and crops by the U.S. military.

Carson’s home in Taos has been transformed into a museum that bears his name. A national forest is named for Carson as are schools and roads in the area.

The proposal to change the name of the Taos Park started when a group of citizens representing the pueblo and the town organized into the Taos Peace and Reconciliation Council last spring.

Lyla June Johnston, whose mother is Navajo and father Cheyenne/European, was one of the people who started the Peace and Reconciliation Council. She grew up at the Taos Pueblo and knows everyone there, she said.

“The purpose of the group (the Peace and Reconciliation Council) is to bring about harmony amongst groups of people in Taos who in the past were at war with each other, literally at war with each other. This group included pueblo people, descendants of Spanish settlers, and descendants of American settlers. The group is multiracial, and multicultural, with a Hispanic, a Chicano, two pueblo people and me – half and half mixed breed.”

Describing Taos she said, “There is prejudice. We have to address some of these issues of the past. One way is to rename Kit Carson Park. It’s an apology, a name change from someone who symbolizes the domination of Indian people.”

In April, Peace and Reconciliation Council members went to the mayor of the town of Taos with the proposal to change the name of the park. The mayor was enthusiastic about the idea, Johnston said, so the group appeared before the Taos Town Council in June and the Town Council “was so moved by the presentation” of the group that councilors voted three to one to change the park name. They proposed that the new name be Red Willow, the traditional name the Taos Pueblo has for itself, “Place of the Red Willow.”

Johnston, who works in California, said she could not appear at the Town Council meetings but sent statements and kept up with the process long-distance.

“The Taos Pueblo said it was a wonderful idea, but there was also a faction within the pueblo which said that it’s our name, we don’t want it appropriated to something that’s not ours. The park belongs to the town.”

Johnston recalled that Taos Pueblo Tribal Secretary Ian Chisholm said thank you for this gesture of reconciliation, but there were a small number of people who said that Red Willow doesn’t represent the whole tribe.

At the next Town Council meeting people came to voice their opinions about the proposal to change the name of the park. And, there was a divide; some liked the idea, others were angry.

“At the second Town Council meeting there were more supporters of the name change. A huge mob of people wanted to have the change. They came to the second town meeting holding red willow sprigs,” Johnston said. But, there were a small handful of people against the change. A small minority rose up in vehement opposition. They resorted to violent and intimidating tactics including death threats to council members through emails and phone calls. There were a few people who were vehement about keeping the name the same. They were a minority but a loud minority. Some people were very supportive of keeping Kit Carson. To others it is a symbol of destruction to the Navajo people.”

But, Johnston added, “The main point I want to make is that it isn’t just Native Americans who want a change. Most of the people who flooded the town council meeting in favor of the name change were not Native American. I think this is because everyone wants to reconcile this violent past together. By doing this we liberate everyone from shame and regret.”

Then, in July, at the next Town Council meeting, the Council voted to rescind its earlier resolution to change the name of the park – again by a vote of three to one.

Johnston said that since the council voted to rescind the resolution she hasn’t been very active in the name change idea, but “I want to revive it.”

Johnston thinks that the controversy arose “because some in the culture seek to continue its paradigm of domination. Kit Carson is a symbol of that. There is Harney Peak in South Dakota named for a general who massacred hundreds of Native Americans. They want to keep the status quo and the story of domination alive. There’s Custer National Park. Our Kit Carson Park is one of six Kit Carson parks across the West. It’s a symbol of domination.”

But, she added, “There is an awareness of the negativity of names and a trend to change them. The Washington Redskins controversy is one and there is this proposal to change Kit Carson Park.”

One mistake the council made was that members “did not involve the community at large in the new name,” she added.

Johnston said she expected that there would be controversy but not to this extent.

“I will keep trying, start talking again with the Pueblo and with the opposition and come to some real reconciliation to change the park name. Everything I do is about reconciliation. The main point I’d like to make is that the change in name doesn’t just help Native people. It helps non-Natives. When we reconcile a violent past we liberate everyone from shame and regret.”

At the July Town Council meeting, there was a proposal to create a committee to find out what to do next about the name change, but Johnston said she hasn’t heard anything more about it.

“Issues went beyond Carson. Issues of racism have come out,” said Taos town councilor Andrew Gonzales. “The Pueblo never asked us to do this. It was us trying to make decisions on their behalf without asking for their feelings. The Pueblo never petitioned us. The Pueblo responded that the name Red Willow is sacred to them. The Pueblo council did not want the name change.”

Gonzales said he had calls from across the country.

Gonzales said he received emails from all racial groups against the name change.

“There were hidden race issues,” Gonzales continued. “I see both sides of the argument. People said, ‘It will still be Kit Carson Park. The Navajo don’t like it. A name change will not heal that. You can’t change history.’ You can’t change the facts. I don’t want to create a racial divide. We need each other.

“In all these years, there has never been a protest. You will not heal these transgressions by a name change. We want harmony. We do not want to create issues that divide us. We go to each other’s festivals. We need to move past this. There was so much backlash. Kit Carson was a hero to Taos people and to war veterans. It’s complicated. In many aspects Kit Carson is an American hero. He’s not a villain here. He was following orders. He was friendly with the Taos people. The community is beginning to heal and move past it. There should not be blood shed for a name change. If it was split 50/50 I could change the name or if the pueblo governor came to me. But that was not the case.”

As to the Taos Pueblo Council “Some were OK with the name change but the majority said no. They did not want to create a racial divide. If they want the name change we will revisit it. So far, no one has come forward.”

Gonzales said he felt the name change was “the right thing to do.”

But, he added, “I have to do the will of the people. I was blown away with the reaction. We left it alone. Let’s get on with the healing process. Racism exists. The question is how to change it. We’re all due for a history lesson. All views are sensitive to the wants and needs of the whole community. We can’t do anything unless a majority of people agree.”

Fritz Hahn, the councilor who voted not to rescind the resolution to change the park name, said he hoped that with the vote to change the name to Red Willow “we could begin the long road of reconciliation.”

But afterwards “I received many letters supportive but more were opposed to it. I would say that 70 percent were opposed and 30 percent in favor. There were threats and verbal abuse. I was determined to hold fast. The name Kit Carson is a glorification of military conquest. There was a huge outcry. I hope to have an opportunity to discuss this further, to have a dialogue. There are stories that need to be told. It’s about more than the name of a park. It’s about bigotry and racism. The name change was a catalyst. It brought to the surface bigotry and racism.”

Hahn said he received calls from Taos and from across the country.

“They said ‘you are trying to rewrite history. You’re just trying to be politically correct.’ I was dismayed and saddened. We can’t listen to each other. I visited the pueblo to see friends. One shared with me that Red Willow is a sacred name which is why the tribal council voted it down. That never occurred to me. The tribal council did not approve of the name change and they have sovereign status. The tribal chairman would say, ‘We’re grateful for the gesture, but it’s the wrong gesture.’ I don’t want to put the issue off. Change happens slowly. Unless we bring it up nothing will happen. Good things came out of this. Everyone in town is talking about it.”

Hahn said that about 10 years ago a similar request was made to change the name of the park, but “the town council ignored it.”

Since the council discussed the issue, “We got everybody talking about it. It’s very uncomfortable. Now we’re in retreat. There is no move to visit the park name. It’s dead in committee. It’s still an issue for me. People say, ‘We have roads to fix. Let’s not mess with the park change. It’s too controversial. Let it lie.’ It’s hard to talk about yet it’s on everybody’s lips.” 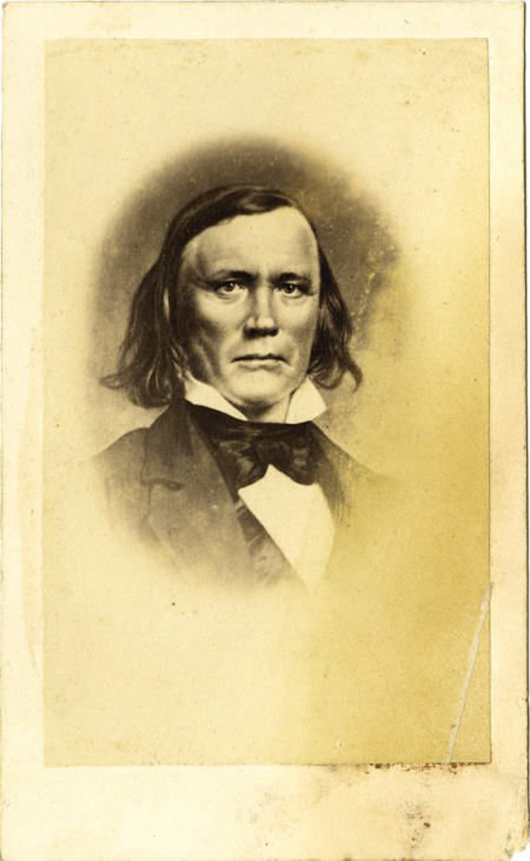 The Kit Carson Home and Museum in downtown Taos, New Mexico. Image by Bill Hathorn. This file is licensed under the Creative Commons Attribution-ShareAlike 3.0 Unported license.

Navajos took different tack in dealing with auction of artifacts

Debora Hunter’s Taos photos to be exhibited at SMU