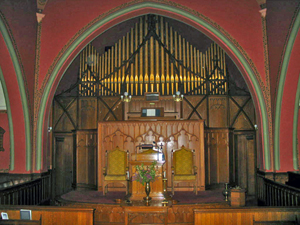 A similar Johnson pipe organ at the Pullman Memorial Universalist Church in Albion, N.Y. Image by Pmucpastor. This file is licensed under the Creative Commons Attribution-Share Alike 3.0 Unported license.

HEATH, Mass. (AP) – After a 21/2-year absence, the Opus 16 Johnson pipe organ is back in its place of honor inside the Heath Union Evangelical Church—better than ever after its $160,000 restoration.

Built around 1850, the organ was scheduled to be rededicated in a special service on July 21, an event that was supposed to include an inaugural performance featuring international concert organist Nathan J. Laube. The free concert was planned to be held in the Heath Union Church.

Gone is the white paint, which was applied to the original faux-wood grain surface, and back again are the original gold-plated facade pipes that had been stored inside the organ for at least a century.

All the original leather components have been replaced, and a missing rank of pipes has been replicated.

Ruth Johnson of Heath, who has spearheaded fundraising efforts for at least two decades, played the newly restored organ for the first time during this year’s Palm Sunday church service.

When asked how the organ sounds, she replied, “It’s got much better depth. With the old (electric) blower, there wasn’t as much air-flow as there should have been.”

Johnson, who is not related to the organ builder, said the restoration “was much more authentic than they thought it was going to be. That’s why this is such a treasure.”

By the 1980s, it was clear to church members that the organ needed an overhaul. Sometimes the 130-year-old leather parts would fail, rendering the organ unplayable. Fundraising started, but was put on hold when the church had to raise money to make structural repairs to this historic church building.

“It’s been miraculous,” said Johnson. “We had people from all over the country (donate)—people that knew Heath, or that had summer places, or that were organ-lovers.”

S. L. Huntington & Co. of Stonington, Conn., which specializes in the restoration of period instruments, was hired to do the work. In June 2010, the restoration workers began dismantling the room-sized organ, carefully numbering each component, before taking them to Connecticut for cleaning and restoration.

Fundraisers originally thought the organ was built in 1851, based on a list of models published by Johnson in 1894. But the organ itself tells another story: Found in two places on a pedal pipe that would never have been seen until it was taken apart were signatures and dates from one Cyrus Burnett Smith of Haydenville. On a hidden pipe regulator was his name and the message: “Cyrus Burnett Smith pumped this organ 1850 1851 1852 1853 1854.” On another pipe he wrote: “I blowed this organ from 1850 to 1854. Cyrus B. Smith.”

Also, a piece of newspaper dated April, 1849 had been used as a shim in one of the wood pipes.

Research from Ned Wolf and organ restorer Scot Huntington indicates that Opus 16 started to be built on speculation in 1849, and was purchased, unfinished, by Joel Hayden Sr. for the Haydenville Congregational Church, which was also under construction. But midway through its construction, Opus 16 was modified from a G-compass organ to a smaller-scale C-compass organ, with several of the original note channels blocked off.

The restoration adheres strictly to guidelines by the Organ Historical Society, which has recognized the Heath Union Church organ as a “National Heritage Pipe Organ of Historical Significance.”

Out of about 10,000 pipe organs believed to be in existence, fewer than 500 have received this designation.

The wind pressure, which had been lowered at some point in the organ’s past, has been raised to original strength, restoring a fullness to the tone. Also, missing items, such as stop lables and pipes were carefully crafted as replicas of the originals.

The organ was dubbed “Opus 16,” because it was the 16th instrument out of an eventual 860 organs to be built by the Westfield-based Johnson Organ Co. between 1848 to 1898.

The Heath congregation purchased the old organ for $100, it was taken apart, then brought up to Heath by horse and wagon in 1914, according to the restoration committee. It was reassembled in the Heath church, and the only modification made to it since then was in 1940, when an electric blower was installed, to eliminate the need for someone to hand-pump the bellows as the organist played.

Nathan J. Laube has played concerts throughout the United States and Europe, and has been a featured performer at three national conventions of the Organ Historical Society. The William Fulbright grant-holder has a master’s degree in organ from the Muskihochschule in Stuttgart, Germany. This fall, he will join the faculty of the Eastman School of Music in Rochester, N.Y. He has also won top prizes in international competitions.

Johnson said the plan is to continue hosting organ concerts at the Heath Union Church, including performances by local organists. 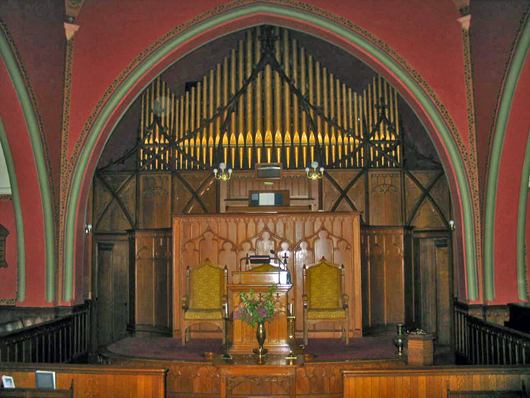 A similar Johnson pipe organ at the Pullman Memorial Universalist Church in Albion, N.Y. Image by Pmucpastor. This file is licensed under the Creative Commons Attribution-Share Alike 3.0 Unported license.