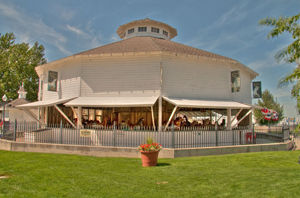 Another famous carousel made by Philadelphia Toboggan Co. is the 1906 Kit Carson County Carousel in Burlington, Colo. Image courtesy of Wikimedia Commons.

NEW YORK (AP) – In the shadow of the Brooklyn Bridge, strains of old-fashioned music from an organ float over the East River, mingling with the sound of children’s laughter. It is coming from one of the happiest little spots in New York City: Jane’s Carousel, a twinkling antique jewel that spins in a see-through pavilion on the river’s bank.

One afternoon in early autumn, just about everybody seemed enthralled by the rise and fall of the 48 hand-carved wooden horses as they rode in circles over and over in Brooklyn Bridge Park. It was mostly young children emerging from nap time with their mothers, but even some hipsters in skinny jeans and Ray-Ban Wayfarers decided to stop and take a ride, hanging their heads back and grinning as they went.

“I think the lights, the music, the horses, it just brings out joy in everybody,” says Jane Walentas, the artist who spent years restoring the carousel to its original splendor.

Jane’s Carousel is the latest attraction to hit DUMBO, an offbeat waterfront neighborhood that is slowly evolving from a deserted manufacturing zone to an upscale hipster hangout with art galleries, boutiques and million-dollar condos. DUMBO stands for Down Under the Manhattan Bridge Overpass, and the carousel is located right between the Brooklyn and Manhattan bridges, which span the river and connect the two New York City boroughs. The carousel is housed in a clear acrylic pavilion, designed by the architect Jean Nouvel, and it offers stunning, and weatherproof, views of the bridges, the water and Manhattan across the way.

Jane’s Carousel is no native New Yorker. It was built by the Philadelphia Toboggan Co. in 1922, and for much of the 20th century, it stood in Idora Park, a popular spot in Youngstown, Ohio, then a prosperous city of steel mills. In 1975, it became the first carousel ever listed on the National Register of Historic Places.

Youngstown fell on hard times with the decline of the steel industry in the 1970s, and after Idora Park was wrecked in a fire, the carousel went up for auction in 1984.

At the time, Jane Walentas’ husband, real estate developer, David Walentas, had been commissioned to develop the land that eventually became Brooklyn Bridge Park. He had asked his wife to help him find a carousel to install there. The Idora Park carousel was on the verge of being sold off piecemeal when the couple placed a $385,000 bid to buy the whole thing.

“We didn’t think we had a chance at it, because there was a very well-known developer in Youngstown who we assumed was going to buy it and save it for them,” Jane Walentas recalled. “That didn’t happen.”

Lynn Kirkwood, 60, who grew up in Youngstown, still remembers the cheering when locals learned that the carousel would survive intact. She is among the countless people from Ohio who have thanked Jane – in letters, phone calls, emails – for saving the carousel from destruction.

“A lot has changed in Youngstown. It’s never gonna be the town that I grew up in anymore,” Kirkwood says. “But to have that carousel somewhere and still in existence? It’s just like a dream come true.”

Walentas gets choked up when she talks about the people from Youngstown who have come by the busload just to see the restored carousel since it opened in September.

Walentas spent nearly 25 years working on the carousel, scraping off layers of paint with a knife to reveal the original paint and beautiful carvings. Along with a team of six people, Walentas rewired the carousel with 1,200 lights, cut new mirrors for the horses’ bridles and replaced the jewels embedded throughout it.

“The paint was so fragile and broken,” she said. “And there were a lot of carpentry repairs that needed to be made.”

The carousel then sat unused for another four years in a DUMBO gallery, visible through a window from the street, while Brooklyn Bridge Park was completed, the agreement to install the carousel was completed as well, and the carousel pavilion was designed and built.

In the month since it opened, the carousel already has become a welcome addition to the neighborhood’s draws for tourists, which include Jacques Torres’ chocolate shop at 66 Water St. and a stone marker on the pier where George Washington and his troops fled by boat to Manhattan after the disastrous Battle of Brooklyn in 1776. At night, the carousel runs a light show every hour, projecting the dancing shadows of horses onto the walls and ceiling of the pavilion. The lights can be seen from across the river.

Craig Whitney, 68, was admiring the carousel with his wife as they basked in the sun on a nearby bench, taking in the tranquil scene.

“It’s been so perfectly restored. And in this setting, it’s just magnificent,” he said. “It’s got sort of a hurdy-gurdy organ in it. That’s something that was made a hundred years ago, and people still like to hear the sound. I think there’s a romantic appeal to things like this from the past that make you feel good.”

JANE’S CAROUSEL: http://www.janescarousel.com . Located in the DUMBO section of Brooklyn, N.Y., in Brooklyn Bridge Park on the East River, between the Brooklyn and Manhattan bridges. The carousel is easily accessed from park entrances at Dock Street or Main Street. The nearest subway station is the F train to York Street. Open 11 a.m. to 7 p.m.; closed on Tuesdays. (Winter hours: Nov. 6-April 5, 11 a.m.-6 p.m., closed Monday, Tuesday and Wednesday.) Tickets, $2. Children ages 3 and younger and those under 42 inches tall may ride free with a paying adult. Package of 12 tickets, $20. Group rates are available.

For the record book: 4,000 autographed baseballs