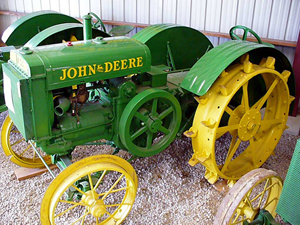 The Deere Model D, produced from 1923 to 1953, boasts the longest production span of all the two-cylinder John Deere tractors. Over 160,000 were made. This one was manufactured prior to 1926. This file is licensed under the Creative Commons Attribution-Share Alike 3.0 Unported license. Attribution: Artiez at the English language Wikipedia.

CLEVELAND, Miss. (AP) – G.R. Harden has been around tractors all of his life.

He farmed his family’s land outside of Cleveland starting in 1959. The then 19 year-old Harden took over the land from his dad, who retired that year.

Harden was not always crazy about the pre-1960s tractors that sported only two cylinders, but he has developed a love for the machines in his later years.

“I grew up on those two-cylinder John Deere’s to begin with, and I couldn’t wait to get rid of them when they came out with the modern tractors,” Harden said. “A friend of mine, David Thornton, who lives here in Cleveland, is the one who got me back in it.”

Harden said that Thornton came to him over 20 years ago, looking for someone to refurbish the collector’s items.

“I helped David redo one of his,” Harden said. “I knew how to paint, so we painted it and fixed it up. That was back in the ’80s.”

Once the men got done with the first one, it became a habit for them.

“We found another one and redid it, and it just kept rolling from there,” Harden said.

Today Harden and his wife, Barbara, are retired from farming, but they are still fully involved in the hobby that has helped them meet tractor enthusiasts from all over the country.

Harden said that his grandfather and father always stressed the importance of keeping machinery clean and in good running condition. That’s why Harden and his right-hand man, Raymond Crossno, have been so successful at making their tractors seem like they are brand new.

“We’ve always kept our tractors first class,” Harden said. “My granddaddy pressed me about keeping everything in ship shape.”

Crossno joined the outfit after the initial tractor had already been redone, but with his mechanical skills, he fit right in.

“When I came to work here, they had already started doing it, and I kind of fell right into it,” Crossno said.

Harden and Crossno have had their hands into hundreds of tractors over the last two decades, remodeling their own to keep and sell and sprucing up a steady diet of machines from folks local and afar.

“This is what we do,” Harden said. “It’s turned into quite a hobby.”

Harden has a variety of tractors on hand at any given time. The most interesting he’s seen is a 1930s tractor that has the serial No. 1, meaning it was the first tractor of its kind sold.

It’s those kinds of tractors that make the hobby not only interesting but challenging as well.

Crossno and Harden have both worked on tractors that have parts that are not even sold anymore.

“Sometimes you have to make the parts,” Crossno said.

Crossno said that once he had to replace bearings on a tractor that were no longer available. He and Harden had to completely tear down another machine to find a set that would fit.

“Sometimes it takes two or three tractors before you find a fit,” Harden said.

Restoring these tractors is also a process that is drawn out over time.

“Sometimes, in getting the parts and getting exactly what you need, we work on them two or three months,” Harden said. “You may have two or three jobs going at the same time.”

Harden and Crossno’s method to their maddening work is simple. They pull the machine down to the tiniest piece. As they clean, replace and paint all the tractor, piece-by-piece, they reassemble.

“You tear it all to pieces,” Harden said. “Then you put it back together right, replacing everything it needs. You try to make it like new.”

Copyright 2001 Associated Press. All rights reserved. This material may not be published, broadcast, rewritten, or redistributed. 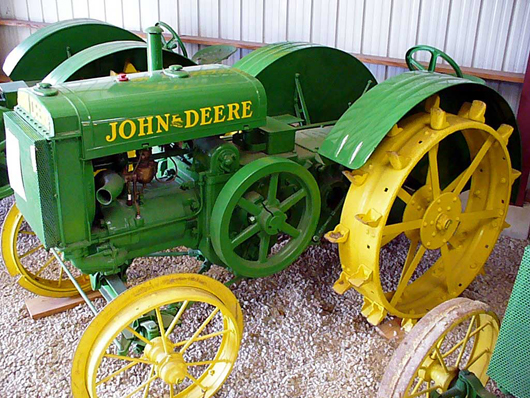 The Deere Model D, produced from 1923 to 1953, boasts the longest production span of all the two-cylinder John Deere tractors. Over 160,000 were made. This one was manufactured prior to 1926. This file is licensed under the Creative Commons Attribution-Share Alike 3.0 Unported license. Attribution: Artiez at the English language Wikipedia.