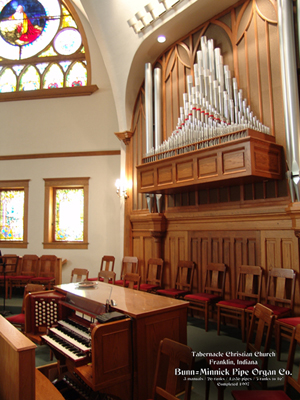 COLUMBUS, Ohio (AP) –Later this year, someone at a church in Charlotte, N.C., will press the keys on a brand-new pipe organ, and a rich sound will fill the room.

That moment is on the minds of everyone at Bunn=Minnick Pipe Organs. The instrument is taking shape in the main assembly room of the operation in the Harrison West neighborhood in Columbus. In that two-story space, every detail will come together before the components are disassembled and delivered to their ultimate home.

The 20 or so employees do a special kind of manufacturing, in which a few projects take up an entire year and the workers are artisans as much as they are laborers.

The company’s work can be seen in eight states, including new or restored organs at several churches in central Ohio and at the Ohio Theatre in downtown Columbus.

Seated in a second-floor conference room, Minnick and fellow co-founder Robert W. Bunn Jr. explained how this so-called king of instruments produces sound. The tones come from the push of air through the pipes, controlled by pressing keys on the console. In ancient times, the air pressure often came from bellows. Today, an electric motor does the work.

Bunn=Minnick began in 1969 with a small commission from a church. The initial work took place in Bunn’s basement. Together, the two men gathered about $1,000 to get started, they said.

Minnick was a classically trained organist, and Bunn was a repairman who had taken an interest in the mechanics of pipe organs. They met while working at A.W. Brandt Co., the largest organ company in Columbus at the time.

The new venture was a part-time job, Minnick said. After a few years, though, both men had quit their day jobs and bought a building at First and Harrison avenues.

Bunn holds the title of vice president. A third co-owner, Leo J. Klise Jr., joined the business in the mid-1980s and handles much of the financial management.

Since 1992, Bunn=Minnick has been housed on Michigan Avenue in a three-story brick building. The space was once the headquarters of a company that makes oil derricks, but had been abandoned and required redevelopment inside and out.

Today, employees look out the windows at new condominium complexes and businesses.

Bunn=Minnick’s building is large enough that the company can produce almost every part in-house and keep a supply of used parts.

Nearly the entire basement is devoted to woodworking. The third floor has several rooms for pipemaking, with a casting area where employees melt metals and shape the mixture into cylinders. And there’s a “voicing room” where the pipes are adjusted to meet precise tonal qualities.

Front-office functions are on the ground floor, which is also the domain of Elsa, a gray terrier mix who saunters from room to room.

The co-founders’ lives are intertwined with the business to a point that there is little separation. Both live nearby and spend much of their spare time at the office.

Bunn, 71, has an almost perpetual smile and looks much younger than his age. He keeps a workshop on the third floor, where he tinkers with old electronics. For him, no device is obsolete, and anything can be repaired.

“It’s like the guy who has a neat garage, only our garage is this whole building,” he said.

Minnick, 61, is the more buttoned-down of the two. His office has a plaque with the quote: “When two people in a business always agree, one of them is unnecessary.”

One of his few flights of fancy is his collection of antique light bulbs, with many shapes and sizes stored in two display cases. The grouping ties into his fascination with electricity and the work of Thomas Edison, an inventor who also dabbled in building organs.

“My mother liked to joke that she must have gotten shocked when she was carrying me,” Minnick said.

One of the company’s finished products can be found at First Presbyterian Church in London, Ohio, in Madison County. The organ takes up almost the entire back wall, with 42 sets of pipes built to conform with the cathedral ceiling.

“The installation in our sanctuary fits so well that newcomers – and I dare say some old members – think that the organ has always been there,” said Thomas Lloyd, church music director. “The Bunn=Minnick sound is exactly what we wanted and is great for hymn-singing.”

Although pipe organs have been around for more than 2,000 years, the modern organ industry reached its peak after World War I. The instrument became an essential draw for movie theaters in the days of silent films in addition to its traditional role in churches.

Demand was high enough that several organ-makers became large-scale manufacturers. One of the largest was Wurlitzer, with roots in Cincinnati. The boom was followed by a bust, hastened by the arrival of movies with sound.

“When the talkies arrived, the theater-organ industry dried up almost overnight,” said Robert R. Ebert, an organist and a retired economics professor at Baldwin-Wallace College in Berea, Ohio.

The decline continued, and craftsmen and companies got out of the business, he said. The 1970s recession was particularly difficult for organ-makers because it coincided with the rise of “modern worship.” Many churches were being built without organs; the musical accompaniment was handled by guitar and piano. Other churches used smaller, less-expensive electronic organs.

Today’s industry includes about 50 organ-makers in the United States and Canada and about 200 smaller shops that do mostly tuning, repairs and restoration, according to the most-recent annual report that Ebert completed for the American Institute of Organ Builders. Annual sales are around $100 million, including about 70 organs built in 2009.

Among the other local firms is Peebles-Herzog, also in Columbus, which has 10 employees.

Ohio also is home to one of the country’s largest and oldest organ-makers, Schantz Organ Co. in Orrville, about 25 miles southwest of Akron. It started in 1873. Victor Schantz, its president, is the grandson of the founder. He oversees a staff of about 60.

Like most businesses, organ-makers were hit hard by the recent recession. Churches scaled back on building plans, and the number of major projects dwindled.

And yet, the leaders of Bunn=Minnick are optimistic. Some churches have rediscovered organ music, part of a desire to “bring the mystique back” to services, Minnick said. This has inspired several restorations of old organs and new construction, which might be the seeds of a trend.

Ebert is waiting for a trend to show up in sales figures.

That doesn’t diminish the enthusiasm at Bunn=Minnick.

“I think this is one of the most exciting times ever,” Minnick said.

Such sentiment is one of the reasons that neither of the co-founders plans to retire soon.

The men view the business as their ministry, their way to spread their belief that religious services should be as grand as a major chord played on a pipe organ. 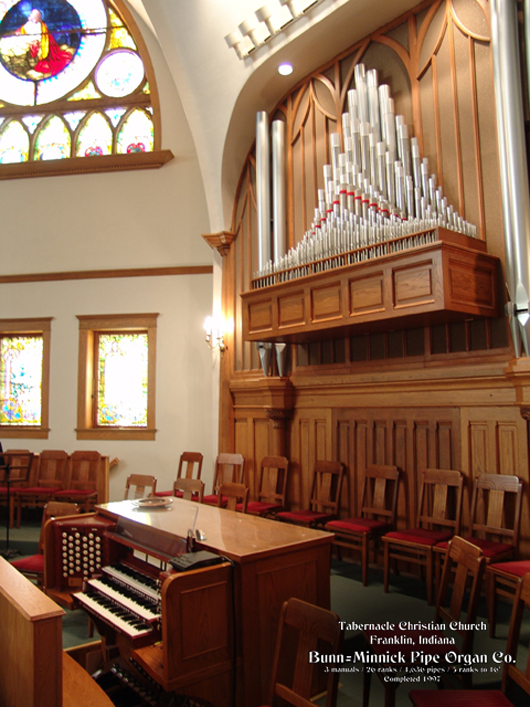 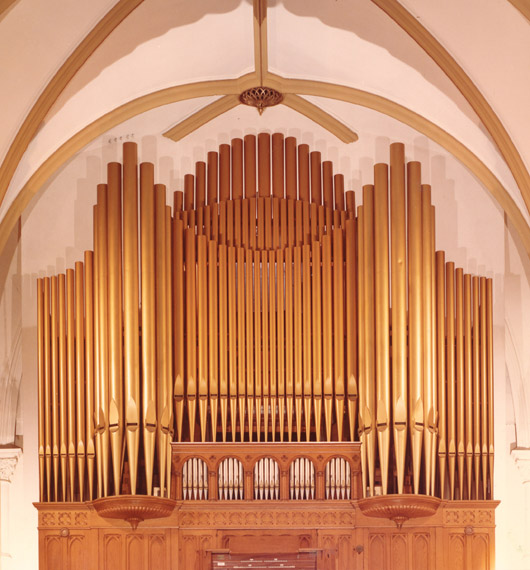 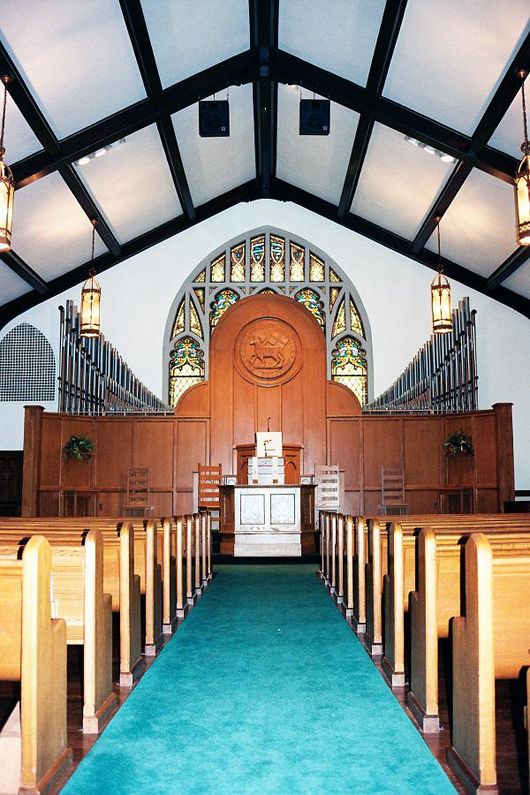 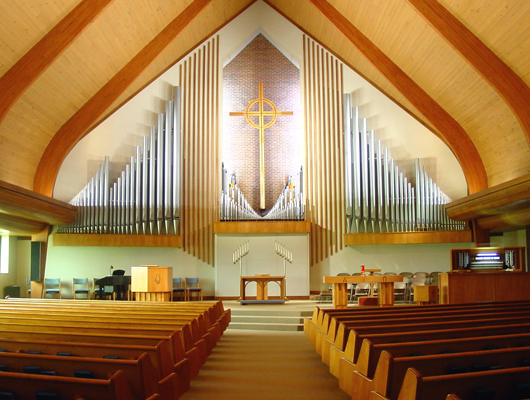 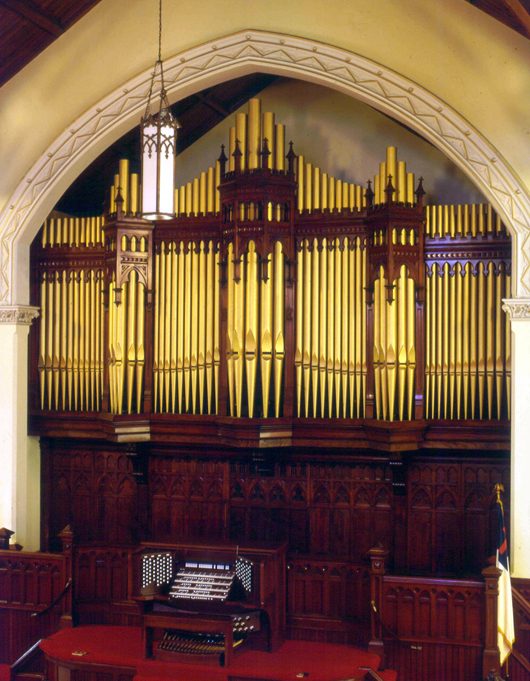