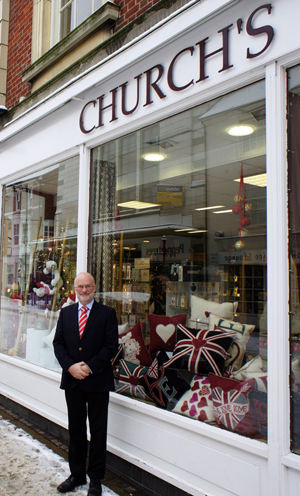 Stephen Church, standing outside his Church’s China store in Northampton, describes the interest in royal wedding souvenirs as ‘quite staggering.’ Image courtesy of The U.K. Gift Company.

NORTHAMPTON, England (AP) – Surrounded by boxes in a rickety old warehouse above the family shop, Joe Church hurries to wrap plates adorned with the faces of Prince William and his bride Kate Middleton for a customer in Australia.

Church’s, a 152-year old china and ornament seller specializing in memorabilia, has plenty of reason to celebrate the upcoming royal nuptials as its cash register chimes with the wedding bells.

“It’s good for the royal couple, it’s good for everyone in the U.K. and it’s certainly good for business,” beams Joe’s father, Stephen Church, in front of a display of goods ranging from heart pillows to look-alike William teddy bears.

But just an hour down the road on a rainy building site outside Cambridge, it’s a very different story.

For Dick Searle, the owner of a small eponymous digger rental service, the royal wedding – and an extra public holiday – couldn’t come at a worse time. As Britain struggles to pull out of an economic downturn that has crippled the building industry, the last thing Searle needs is to pay his staff for a day with no work and leave expensive equipment idle.

“They didn’t ask us about it, did they, and we are having it hard,” said Searle as his crew laid a new driveway in the drizzle. “Good luck to people selling rubbish plates, but for us it’s nothing but bad news.”

While the union of the photogenic young couple is a boon for a select few British businesses, the cold statistics suggest it is actually a drag.

Analysts predict the April 29 wedding and the creation of an extra public holiday will provide a boost of up to 1 billion pounds ($1.6 billion) to the economy, largely through retail sales, hotel room bookings and the hospitality trade.

But each public holiday also typically costs the economy 6 billion pounds in lost productivity – leaving a 5 billion pound shortfall at a time when fears of a double-dip recession weigh heavily.

The Federation of Small Businesses, a leading lobby group in a country where the average business employs just four workers, is worried about the timing of the wedding. The creation of a public holiday to celebrate the event so soon after the Easter break increases the chances of many workers taking extra vacation time – or a few unauthorized sick days – to extend their time off.

That’s an unappealing prospect for many small businesses at a time of rising unemployment, surging inflation and harsh government spending cuts.

“It will be a difficult time for a lot of small businesses that had been looking for improvement at Easter,” said Andrew Cave, the FSB’s chief spokesman.

Still, supporters of the nuptials, led from the top by a congratulatory Prime Minister David Cameron, are hoping that the feel-good factor generated by an extra day off will be worth the inconvenience and lost economic revenue in the longer-run.

“At a time when the headlines seem to be dominated by bad news, the nation is rightly seizing the opportunity to celebrate something positive.”

Cameron was keen for the event to be a public holiday to make it a “national celebration,” providing a bright spot in an otherwise bleak outlook for average Britons.

National holidays were declared to mark the wedding of both Charles and Diana in 1981 and Queen Elizabeth II’s Golden Jubilee in 2002. One is also planned for the queen’s Diamond Jubilee next year.

The pressure group Republic, which campaigns for an elected head of state, said it was “absurd that the whole country gets a day off for something most people are not interested in.”

“At least 20 percent of the population are opposed to the monarchy, many more simply don’t care about it,” said spokesman Graham Smith.

Among the clear winners are retailers, led by grocers who are banking on a boost to champagne and food sales over the weekend as people celebrate at home or at street parties, and sellers of wedding merchandise like Church’s. More general retailers are also expected to see a small uptick as many people hit the shops on their extra day off.

In research for Kelkoo, the Center for Retail Research forecast the wedding to provide a 530 million pound ($856 million) boost to British retailers as around 4 million locals join the celebration in some way.

Many retailers have been quick to spot the opportunity in the biggest royal event since William’s dad Charles married Diana in 1981.

Within hours of the couple’s engagement announcement on Nov. 16, Wal-Mart Inc.-owned Asda supermarket was selling 5 pound commemorative mugs and Tesco PLC, the biggest retailer in the country, was sewing up versions of Middleton’s royal blue engagement dress.

You can buy anything from tea towels to bargain-basement versions of Middleton’s sapphire and diamond ring – famously first worn by Diana.

The New West End Company, which represents 600 retailers in central London, expects an extra 500,000 tourists over the royal wedding weekend to add some 50 million pounds in both retail and accommodation. Many hotels in the capital are fully booked, leading enterprising Londoners to offer private rooms for rent, with some charging as much as 2,000 pounds ($3,200) for the week.

VisitBritain, the main inbound tourism association, launched a new “Royal Britain” website last week to cash in on the wedding, giving potential visitors tips about where to go, what to see and what to buy.

There’s also plenty of interest – and cash – coming in from people overseas who can’t make it here for the first royal event of the Internet era.

Church’s online site, theukgiftcompany, has taken orders so far in excess of 100,000 pounds – 80 percent of those coming from the United States – and Stephen Church expects to hit seven figures before the big day.

“The level of interest from overseas has been quite staggering,” he said. “This is really going to provide a bridge over the stormy waters that the recession is proving to be.”

Searle still isn’t convinced as he faces the likelihood of shutting down business for an extra week. He has a simple message for the happy couple: “Wills and Kate, I’m not against you, but you should have done what most people do and got married on a Saturday.” 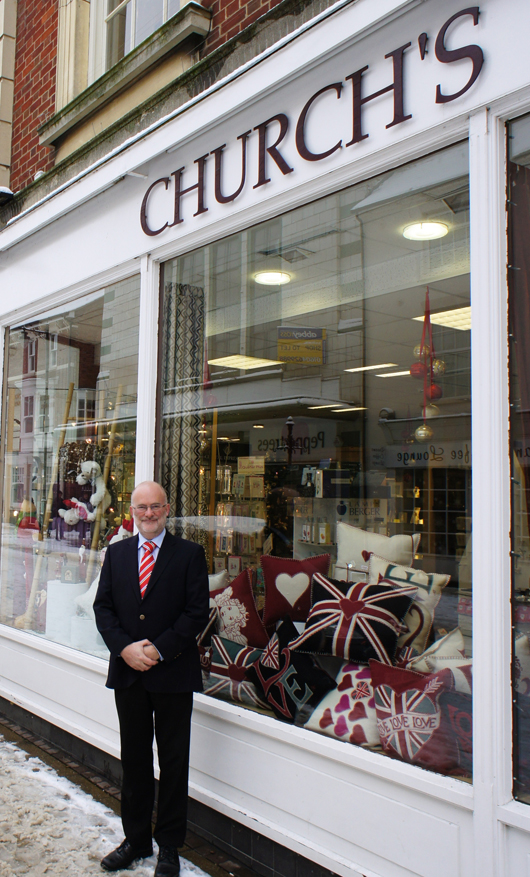 Stephen Church, standing outside his Church’s China store in Northampton, describes the interest in royal wedding souvenirs as ‘quite staggering.’ Image courtesy of The U.K. Gift Company.