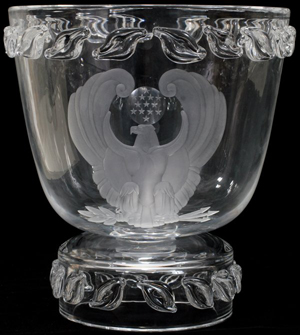 CORNING, N.Y. (AP) – In a memorable Hollywood scene from Risky Business, the 1983 comedy drama that launched Tom Cruise to stardom, a mother’s prized Steuben glass egg goes missing from the mantelpiece only to reappear – imperceptibly nicked – in the nick of time.

Steuben Glass, an American icon of handcrafted crystal for over a century, looks now as if it’s vanishing for good.

Its lone factory in Corning, a glassmaking company town flanked by Steuben County’s tree-topped mountain ridges in southwestern New York, is shutting down Nov. 29, the week after Thanksgiving. With profitability elusive at the best of times, the prospects of reviving the 108-year-old vanity brand seem every bit as slim.

While the matchlessly transparent glass is still acclaimed as the lodestar of lead crystal, Steuben has struggled to find its footing in old age – never more so than since 2008 when glass pioneer Corning Inc. sold the ailing business to Schottenstein Stores Corp., a retail-chain operator in Columbus, Ohio.

Topping the list of critics’ complaints: Uninspiring new designs, the addition of cheaper engraving methods and, for the first time in its history, a production shift overseas that squeezed the price of simpler ornaments and champagne glasses below an unheard-of $100 each.

“They totally lost their way,” said Jeff Purtell, a Steuben dealer in Portsmouth, N.H. “If your design department is pathetic, your costs are prohibitive, and your marketing – and vision for the future – is not successful, then you’re doomed whether you’re making Steuben glass or Twinkies.”

A generation-long slide in demand for fine crystal accelerated abruptly when the financial crisis hit Wall Street in September 2008, just weeks after Schottenstein bought 80 percent of Steuben for an undisclosed price.

“The economy collapsed, so there wasn’t great demand even from collectors,” Sykes said. “We studied others that tiered their product and had some moderate success. Bottom line is, it did not work for us.”

Most of the factory’s 60 workers will be axed, and Steuben’s flagship store in New York will close once its inventory is sold off, Sykes said. Corning, which is expected to rehire more than a dozen union employees, bought back the Steuben brand but held out little hope it might re-enter the crystal arena.

Since 1903, Steuben glass has been fashioned into everything from fruit bowls and decorative animal figurines to one-of-a-kind sculptures bestowed as official gifts of American presidents from Harry Truman to Bill Clinton. Art objects can cost tens of thousands of dollars, with classic pieces creeping into six figures.

“I often wondered why the last generation, maybe two, cut down on Steuben,” mused collector Thomas Dimitroff. “The young folks don’t want it. Same thing with silver. There’s a different attitude. Every year we’re getting further away from the Victorian love of clutter, quality or not.”

Hundreds of Steuben pieces swarm shelves, tables and cabinets throughout Dimitroff’s home. He traces his fascination to his teens in the 1950s when he accompanied his father, a doctor, on visits to company founder Frederick Carder’s home. Carder, who died in 1963 at age 100, never failed to show his gratitude to his physician.

“Every time Mr. Carder said to my dad, now take a piece of my glass, any glass you want. My dad would never take one, and now I wish I could yell at him!”

Like fine diamonds, clear-as-water Steuben (pronounced stew-‘BEN) seems almost to emanate light from within. Depending on how it’s worked, it can reflect or refract the entire spectrum of a ray of light.

Other hallmarks are its elegant, naturally flowing shapes – and eye-popping price tags. While largely confined to the wealthy, Steuben long lured up-and-comers willing to set aside a small fortune to possess a dining-room centerpiece or splurge on a wedding gift for a favorite niece.

Even before being sold by Corning, which was almost continuously steered from 1851 to 2005 by five generations of the highbrow Houghton family, historians worried Steuben’s uncompromising dedication to perfection of materials, craftsmanship and design might someday be sacrificed if profitmaking became primary.

“If you took away the understanding that it might never make money and sold it to somebody for whom it had to make money, that was the beginning of the end,” said Mary Jean Madigan, author of Steuben Glass: An American Tradition in Crystal.

“Little by little, Steuben changed over some decades,” Madigan said. “It began to change a lot right about the time of the centennial in 2003 when it became clear Corning would expect it to be run as a business and not so much as the historical purveyor of fine crystal it had been. What it is now is not what it used to be in terms of what is made, how it’s marketed and who’s buying it.”

Steuben got its start when Carder, an English designer, agreed to run a glass-engraving shop in exchange for the freedom of creating decorative glass. His richly hued creations turned him into a giant of the glass arts scene alongside Louis Comfort Tiffany and Rene Lalique.

The Houghtons, a dynasty of arts patrons, bought out Carder in 1918, but as popular taste turned less ornate, Steuben almost collapsed during the Great Depression.

Corning scientists came up with an exciting new formula – a colorless heavy-lead optical glass – and marketing maestro Arthur Houghton Jr. propelled Steuben into a name of distinction. He staged exhibitions by leading contemporary artists such as Henri Matisse, Georgia O’Keeffe and Salvador Dali, opened a retail store on Manhattan’s Fifth Avenue and advertised in all the best magazines.

As well as signature household items, the ads showcased limited-edition pieces such as an arctic fisherman poised on the ice, preparing to spear his catch.

Few enterprises demanded such a high rate of artistry. A stable of specialists employed both innovative and ancient techniques as the crystal moved from 2,500-degree Fahrenheit furnaces through blowing, grinding, polishing, etching and other precision processes.

While Steuben didn’t always contribute to profits, it burnished Corning’s reputation as an industrial glassmaker with an appreciation for ancient traditions of using glass as an art form. The business hit its peak a half-century ago when it employed nearly 300 people.

Old-timers like Max Erlacher, a master engraver who underwent a seven-year apprenticeship in his native Austria, are aghast at how a beloved company has fallen.

“When I first came here in 1957, it was just a shining star,” he said. “Other companies like Baccarat of France did fabulous glass and still do, but they never had that quality of engraving. But even they’re going downhill because they don’t have the clientele.”

In his studio near Corning, the 78-year-old carries on an 18th-century tradition that has few peers, using dozens of fine copper wheels attached to a lathe to create exquisite engravings.

After Houghton retired in 1973, “Steuben didn’t have the same spirit, the understanding of what it takes to create a piece of art, translate it into glass and market it the right way to discerning audiences.”

In the 1990s, as Corning moved out of consumer glassware into high-tech arenas like fiber optics and LCD television monitors, Steuben began to shrink. It lost money in 17 of its last 20 years under Corning, including $5.7 million in 2007. Sales dipped below $25 million a year. Corning outsourced stemware production to Germany around 2003 – and Schottenstein later turned for glassmaking help in Portugal.

Eric Hilton, a Steuben consultant for 35 years who designed elaborate sculptures given as U.S. tokens of friendship to queens, popes and heads of state worldwide, sees “a definite void with the passing of all that craft and skill” and remains puzzled by “the shift in the appreciation of beautiful objects.”

“Steuben fell down a bit when they started getting the stuff made abroad,” he said. “It didn’t come back quite right at times. Whereas if it was made totally in the Corning factory, it wouldn’t go out the door until it was utterly perfect. We used to think, ‘For goodness sakes, we’re whipping ourselves to death!’”

On a brighter note, dealers expect the vibrant aftermarket in Steuben collectibles to pick up pace. “Tiffany art glass hasn’t been made since the 1930s, and the desirability did not diminish, it’s increased,” Purtell said.