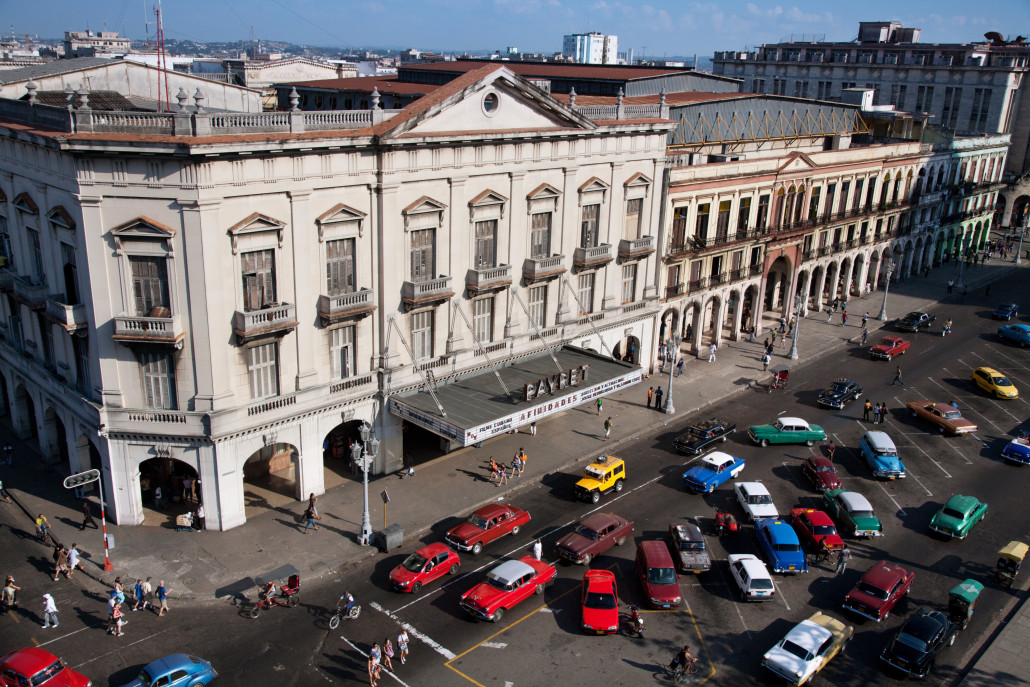 American-made cars from the 1950s are parked outside a movie theater in Havana. Image by Jorge Royan. This file is licensed under the Creative Commons Attribution-Share Alike 3.0 Unported license.

HAVANA (AP) – Even Cubans who don’t speak a word of English eat “un cake” on their birthdays.

They wear “los tennis” and “bloomers.” Their kids go crazy for Taylor Swift and The Big Bang Theory. U.S. science fiction master Ray Bradbury has pride of place on their bookshelves beside revolutionary poet Jose Marti.

Far beyond the antique Chevys on its streets and the memorials to Ernest Hemingway, Cuba is a country whose language, music, literature and fashion are steeped in American influence despite a half-century of official hostility.

The U.S. flag that rises over the Havana waterfront at the symbolic reopening of the U.S. Embassy on Friday will instantly be the most powerful symbol of the American presence in communist, anti-imperialist Cuba. But it will be far from the only one.

Immaculately polished red granite letters spell out “Woolworth’s” in the sidewalk outside a sparsely supplied government-run Havana variety store. An “R” and a “K” poke out from behind the post-revolutionary Banco Metropolitano sign at what used to be the National City Bank of New York.

There’s a national love of baseball, French fries and milkshakes. Cuba’s strain of Caribbean Spanish is rich with borrowed American words. Some, such as the greetings “brother” and “man,” are as current as the pirated pop culture consumed by the island’s youth. Others are comically outdated, like “bloomers” for women’s underwear or “tencens” for the shops that used to be 10-cent stores before the 1959 revolution.

“U.S. influence was very strong and touched every aspect of life, from food to movies,” said cultural critic Ciro Bianchi. “It has always persisted.”

Observers of the two countries say U.S.-Cuban cultural ties are about more than shared tastes in sports and movies. The fact that the two countries remained culturally close through decades of conflict is likely to prove essential as the U.S. and Cuba move beyond the reestablishment of diplomatic relations symbolized by Friday’s ceremony and enter a new phase of broader economic and political normalization.

U.S. cultural influence in Cuba is transmitted from child to parent, among cousins and schoolmates, through the hundreds of thousands of families and groups of friends divided by decades of emigration. Relatives and friends living in Florida, New Jersey and Texas return home with new expressions, clothing brands and TV shows and music.

Fidel Castro and other Cuban leaders have long said they opposed the U.S. government, not its people. American influence is so present and unremarkable that when the government built dozens of state-run gas stations in the 1990s, it painted many with the prerevolutionary English-language slogan “friendly service 24 hours” without raising eyebrows.

Freed from Spain in 1898, Cuba quickly became a virtual colony of the United States, its corrupt politics and oligarchical economy dominated by U.S. interests. From sugar to telephones to banks, most businesses were U.S. subsidiaries. The casinos and nightclubs that drew swarms of American tourists were owned by U.S. mobsters.

Cuba turned against Washington after Fidel Castro overthrew U.S.-backed dictator Fulgencio Batista in 1959. A generation of Cubans grew up with Russian cartoons, clothes and canned food. But the country never truly shook off its deep ties to North America.

Bradbury is so revered in science fiction-loving Cuba that state television dedicated a lengthy report this week to the 60th anniversary of the Spanish translation of the author’s Martian Chronicles, a 1950 book about the colonization of Mars.

Even in the 1970s, at the peak of revolutionary fervor in Cuba, authorities allowed showings of Disney cartoons and American movies like the first two Godfather films, including the famous scenes in “Part II” showing Mafia meetings on the eve of Castro’s takeover of the island.

“I’ve traveled a lot through Latin America and I feel more at home in Cuba than in other places,” said Ted Henken, a Cuba expert at Baruch College in New York.

The “new journalism” of Tom Wolfe and the gritty poetry of Charles Bukowski inspired the writing of Cuba’s novisimos, writers who dived into themes of sexual desire and marginalization amid the economic collapse of the 1990s. And American noir detective novels have been a powerful influence on the country’s most celebrated contemporary writer, Leonardo Padura.

“American dirty realism had a strong influence on an entire zone of literature,” Borges said. “Those writers were the masters for young Cuban writers of that generation.”

The strong cultural ties between the U.S. and Cuba “don’t just have to do with globalization,” Borges said. “This is about a more profound relationship.”
___