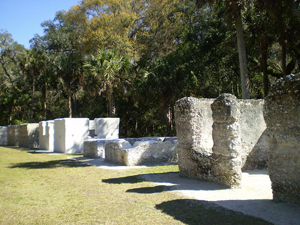 Richard Moter carefully collects each offering, cataloging and dating the items as best he can.

Here’s a Navy button, dating to the 1870s, that he scraped from inside the chimney. And a bottle of cologne he pulled from under the front step, probably from the 1890s.

There’s a silk stocking from beneath the floorboards. And an eggbeater found in the wall. And a pewter cameo discovered near the cistern.

“There’s a lot of history here,” said Moter, 44, the caretaker of the cabin, which stands on his family’s Woodford property.

“A lot of these sites have been destroyed by loggers and landowners. I’m in here just trying to piece together the story.”

More than 150 years ago, the cabin housed slaves who toiled at the Poplar Grove plantation. After the Civil War, it was likely home to farm laborers.

Over the years, a series of residents patched up holes, modified doors, painted the beams and hung floral wallpaper, scraps of which still cling to the walls.

Sometime after 1936, when electricity came to rural Caroline County, someone screwed light bulbs into the cabin’s ceiling.

No one has lived in the two-story structure for probably 50 years, and its wood frame is weak and drafty.

But as a surviving example of slave housing, it offers history buffs like Moter – along with archaeological experts – a unique window into the past.

“This is a real survivor,” said Gary Stanton, a folklorist and historic-preservation professor at the University of Mary Washington who recently visited the cabin. “Usually this stuff’s plowed up and we never see it.”

Stanton and UMW colleague Carter Hudgins, a historian who also has training in historical archaeology, were invited by Moter to visit the cabin, along with a Free Lance-Star reporter.

Both professors have visited the remains of slave cabins throughout the area, working under a National Endowment for the Humanities grant secured by UMW Historic Preservation Chairman Doug Sanford and Dennis Pogue, associate director of restoration at Mount Vernon.

“It’s obviously gone through a lot of changes, but the carcass of the earliest part is still here,” said Hudgins, running a hand along a plank on the cabin’s second floor.

They plan to return to the property to measure the house and take more photographs, entering the information into a database that tracks the architecture of slave housing across decades and regions.

Using historical records, old fire insurance policies and evidence from existing buildings, the research team has collected descriptions of about 900 slave quarters in Virginia _ most of which are no longer standing, Sanford said.

“The good news is there are a lot more out there than we originally thought,” he said. “The bad news is a lot of them are not in great shape. People do not have the money to preserve them or restore them. Time is of the essence.”

Moter said he worries that his cabin may be on borrowed time.

Another on the property burned down in the 1950s, and what’s to say a strong wind won’t come along and finish the job time has already begun?

Until then, he painstakingly gathers all the treasures the cabin is willing to give up, hoping they’ll help him piece together the stories of those who once lived there.

Moter, a descendant of the Pratt family, grew up in the Westmont neighborhood of Fredericksburg.

He estimates his family owns about 10 historic properties in the area, including the old farm where he lives.

He built more than a few leaf forts on those properties as a youngster. But it wasn’t until adulthood, he said, that he came to appreciate the history socked away in those fields and forests.

Exploring them gave him direction, he said.

Before that, he traveled a bit out west, did some odd jobs, played his guitar, “made some mistakes, fixed some mistakes.”

His late great-uncle Beverley Crump Pratt, a local historian and attorney, inspired him to delve into the area’s past, said Moter, who has been at it faithfully for about a decade.

He reads a lot, particularly firsthand accounts of early life in these parts and the oral histories of former slaves, gathered during the 1930s under the Federal Writers Project.

As an amateur archaeologist, he sticks primarily to his family’s land, places like Camden, Auburn and Cedar Creek.

Sometimes he has used a metal detector, other times a shovel. Often, he has relied on historical maps and his own two hands.

He has uncovered farm tools, jewelry, pottery and horseshoes.

At the cabin behind his home, he has found old picture frames, doll parts and a button made of bone dating to the 1860s. Nearby, he dug up two poker chips and several marbles that may go as far back as the Colonial era.

“It’s like a giant pachinko machine,” Hudgins said of the cabin. “Stuff is just falling out.”

Moter said he has sold one or two items over the years to make ends meet. But he has no plans to sell any more.

He’d like to see the items displayed, possibly in the National Museum of African American History and Culture, set to open on the National Mall in 2015.

His work in and around the cabin has given him a much greater understanding of what life must have been like for slaves, Moter said. He hopes his collection can ultimately do the same for others.

“I’ve had quite a few emotional moments while doing it,” he said. “It’s a very serious, heavy thing, not to be taken lightly at all. You’re looking into people’s lives and you’re looking back into times when people suffered. I’m kind of here to clear the air of all the karma.”

Information from: The Free Lance-Star,
http://www.fredericksburg.com/