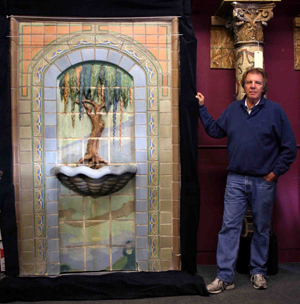 CINCINNATI – Preserving this piece of Cincinnati history was a job most contractors would not be interested in even bidding on due to possible damage and difficulty, said Michael Williams, owner of Wooden Nickel Antiques. But the architectural salvage expert has done it before.

The decorative tile fountain was installed on a wall in the Wheatley Tile showroom building when it was built in the early 1920s. It was laid tile-by-tile on a brick wall covered with a 2-inch veneer of concrete set on two levels. The top half was in the entrance hall and the bottom half was about 2 feet lower in the original showroom and set in concrete. Since the concrete is harder than the tiles and the tiles tend to break, removal of the entire wall was necessary to remove the fountain intact. Williams secured the salvage contract with less than two weeks remaining before demolition.

Thomas J. Wheatley began his career in Cincinnati in the early 1870s working for Dayton Street/Coulton Pottery. In 1879 the Cincinnati Pottery Co. was formed as a vehicle for Wheatley and his students. By the end of 1880 Wheatley was successfully selling to Tiffany & Co., and he worked for Weller in 1897. In 1903 Wheatley and Issac Kahn formed the Wheatley Pottery Co., making art pottery, garden ware and architectural items. It was in the lobby of this company’s showroom that the fountain was installed.

Williams and Wooden Nickel have a history of fountain removal, having successfully removed several fountains made by famous Arts & Crafts artist Ernest Batchelder. In the 1980s the firm acquired and removed a 7-foot figural fountain designed by Clement Barnhorn for the Cincinnati pottery firm Rookwood. That fountain now resides in the Cincinnati Art Museum.

In seven days of nonstop work beginning in early October, Wooden Nickel’s experienced crew of concrete cutters, riggers and craftsmen shored up the ceiling and freed the wall from the foundation to build a protective wooden crate around it and the fountain with heavy-duty stretch wrap around excelsior protective packing underneath. Then a metal frame was welded around the crate so it could be lifted out of place using three 2,000-pound chain hoists. The 2-ton package was then tipped on its side to make the journey out the door to the truck.

In addition to the fountain the project included the salvage of the pair of 9-foot-tall mosaic tile columns with gilt Corinthian capitols that originally flanked the fountain, a pair of bronze exterior sconces that were on each side of the massive entrance door with a bronze grill and a pair of impressive 9-foot-tall-oak arched doors. A number of 6-inch by 6-inch Wheatley decorative tiles from around the showroom and many decorative floor tiles, including two cold air returns depicting parrots, were recovered.

When cleaned and prepared all of the artifacts from this historic building will be displayed in the Wooden Nickel Antiques showrooms in Cincinnati located at 1400-1414 Central Parkway. Wooden Nickel deals primarily in 19th- and 20th-century decorative arts and has made a name for itself in art and artifacts with a Cincinnati provenance such as Cincinnati Art Carved furniture, works by local artist T.C. Lindsay, works by 19th-century Cincinnati craftsmen Mitchell and Rammelsberg, items from the Cincinnati Artistic Iron Works and many examples from Cincinnati’s turn-of-the-century leaded glass studios. 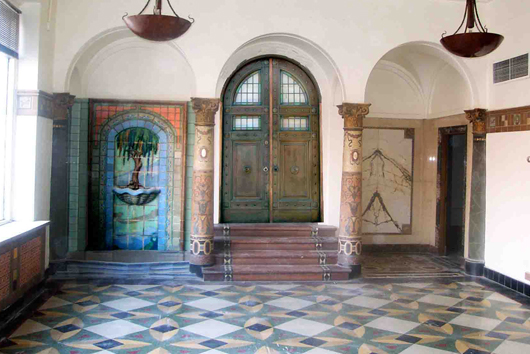 One of a pair of mosaic columns salvaged. Image courtesy of Wooden Nickel Antiques. 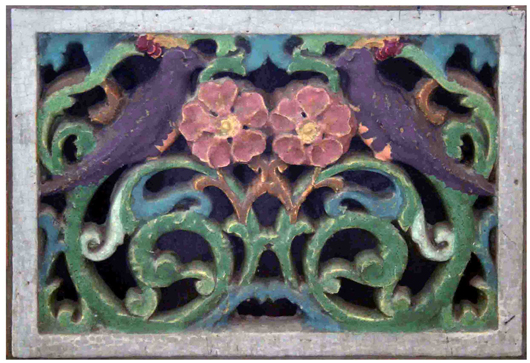 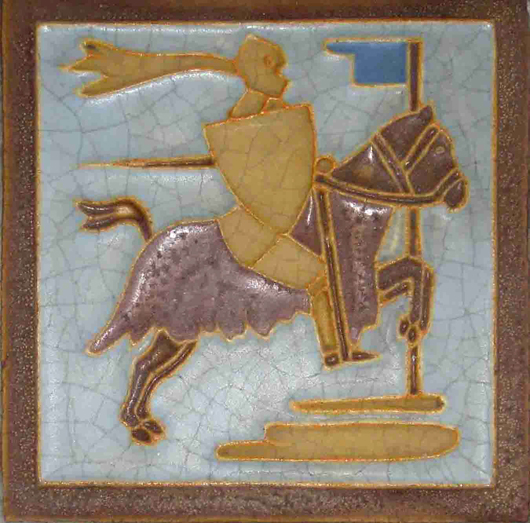