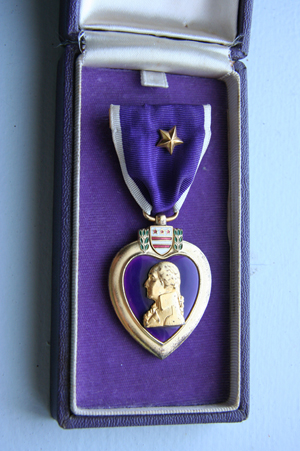 The World War II version of the Purple Heart medal in its presentation case. Image by Jonathunder. This file is made available under the Creative Commons CC0 1.0 Universal Public Domain Dedication.

RALEIGH, N.C. (AP) – When Army Cpl. George Hemphill returned to North Carolina from fighting in World War II, he tried to put the horrors of life as an infantryman behind him by not talking about what he had seen. That included not asking about the Purple Heart he had received and mailed home for safekeeping.

So imagine his confusion when he learned that a Florida man had purchased his medal in 2000 at an antique store in South Carolina with the hope of one day returning it to its rightful owner. And that a man in Vermont now had his Purple Heart and wanted to return it to him in a ceremony to honor his service.

“I’m just flabbergasted,” said Hemphill, 90, of Union Mills. “I don’t know what to think. They’re just going out of their way to give it back to me. I’m just grateful to them for all the work they’re doing. And the expense, it’s just something. I don’t know how to describe it.”

Hemphill received his Purple Heart in a ceremony Sunday afternoon at the Rutherfordton Community Center. Capt. Zachariah Fike of Burlington, Vt., who runs the nonprofit Purple Hearts Reunited, presented the award to Hemphill, along with a Bronze Star that Hemphill never knew the military had granted him.

Fike has returned 20 of the awards since he started Purple Hearts Reunited in 2009, each time either to the family members of the recipient or to a museum if no family members survived. Sunday marked the first time he’s reunited a Purple Heart with a living recipient.

“Returning these medals brings closure to the families. I absolutely love doing it,” said Fike, noting donations don’t nearly cover his expenses of buying the Purple Hearts and travel to present them. “I’ve spent quite a bit of money on this project. I would do it 10 times over because it’s the right thing to do.”

Hemphill received his Purple Heart after being hit by shrapnel Sept. 11, 1944, from enemy sniper fire that blinded him for three weeks. While still in a field hospital, he mailed the Purple Heart to his mother and didn’t ask about it again.

For decades, he thought it was in a box of medals that his mother kept. He later gave the box to his daughter, Donna Robbins, who didn’t know what medals he had won because her father wouldn’t discuss the war with his only child.

The Purple Heart, however, never got to Hemphill’s mother. Its exact whereabouts were unknown until October 2000, when Robert Blum of Pensacola, Fla., paid about $70 for it in an antique store in Columbia, S.C. He kept it safe for more than a decade when he couldn’t find the owner.

A friend told him about Fike, who tracked down Hemphill. Blum mailed it to Vermont – insured and registered to make sure history didn’t repeat itself.

“The best part of this story is that if I had found him right away, I would have just mailed it to him,” said Blum, who planned to attend the ceremony Sunday. “It would have been over and done with. By going through Capt. Fike, he’s getting all the awards. Now the man is getting everything he really deserves.”

Hemphill also only began opening up about his time in combat last year with his daughter. Talking about his experience “brings out memories we try to forget,” Hemphill said. “When you’ve seen what I’ve seen … I’m not the hero. The heroes are still over there – the ones that didn’t come back. They’re the real heroes.”

He didn’t want a ceremony – and when he lost that fight, he didn’t want anyone to know about it, said Robbins, Hemphill’s daughter.

“He said people will think he’s putting on airs,” Robbins said. “But I told him the Purple Heart means the world to us. I have a son, and he wants to keep the medals forever.”

Martha Waggoner can be reached at http://twitter.com/mjwaggonernc 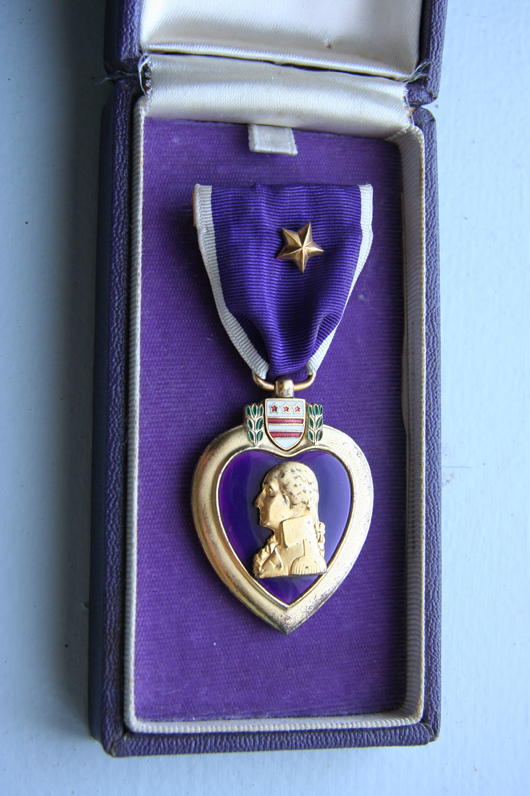 The World War II version of the Purple Heart medal in its presentation case. Image by Jonathunder. This file is made available under the Creative Commons CC0 1.0 Universal Public Domain Dedication.