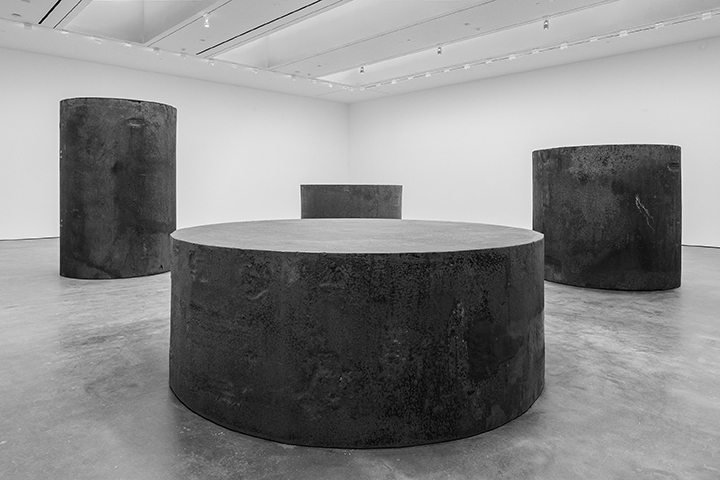 Sited along the Woodland Trail in a densely wooded area across a restored stream, the 4,000-square-foot concrete structure was designed by Thomas Phifer of Thomas Phifer and Partners in collaboration with the artist Richard Serra. The building is the first new construction on Glenstone’s grounds since the opening of the Pavilions in 2018 and invites visitors to experience an entirely new part of the Glenstone landscape.

One of the most influential artists of his generation, Richard Serra (American, b. 1938-), has devoted his decades-long sculpture practice to considering the dynamic between form, space and material. Four Rounds: Equal Weight, Unequal Measure is his third monumental sculpture at Glenstone, joining Sylvester (2001), the torqued spiral anchoring the entrance to the Gallery building, and Contour 290 (2004), a ribbon of steel bisecting the meadow that sits exactly 290 feet above sea level.

Four Rounds: Equal Weight, Unequal Measure is one work composed of four cylindrical forms forged from steel, each weighing 82 tons — the heaviest form that a foundry is able to forge — but ranging in height, diameter and volume. The surface of each form carries a rich, textured patina imprinted by the intense pressure of the forging process. The work is housed inside an unadorned structure made of cast-in-place concrete that visitors will approach along a winding boardwalk.

“Richard Serra’s work has been a cornerstone in the collection since the museum’s early days,” said Emily Wei Rales, director and co-founder. “He helped build Glenstone’s reputation as a destination for monumental site-specific artwork. The addition of Four Rounds to our outdoor program is made all the more special by the collaborative process between Richard and our architect, Tom Phifer. The building they designed is more than a container for the sculpture; it’s an integral part of the experience. We look forward to sharing the beauty of this extraordinary achievement with our visitors.”

Two bridges allow pedestrians to cross the restored stream that was the former eastern limit of Glenstone’s visitor experience. An elevated boardwalk allows visitors to move smoothly across a wetland meadow to the new Serra pavilion. The proportions of the interior building are tuned to the sculpture’s scale and placement. A simple concrete roof is supported by large beams, which serve as walls for the apertures that illuminate the space. White glass skylights bring in diffuse daylight. Variations in light and shadow are dictated by nature, providing visitors an unmediated experience that changes with the season.

About Richard Serra
Since the 1960s, Richard Serra has exhibited nationally and internationally and installed more than 100 permanent outdoor works. In 2007, the Museum of Modern Art, New York mounted a retrospective of his work and in 2011, a retrospective of his drawing practice traveled from the Metropolitan Museum of Art, New York to the San Francisco Museum of Modern Art and later to the Menil Collection, Houston. He has participated in several international exhibitions, including documenta (1972, 1977, 1982, and 1987) and the Venice Biennale (1980, 1984, 2001, and 2013). Among many other awards, in 2018 he received the J. Paul Getty Medal and in 2015, he received France’s highest honor as a Chevalier of the Legion of Honor.

About Glenstone
Glenstone, a museum of modern and contemporary art, is integrated into nearly 300 acres of gently rolling pasture and unspoiled woodland in Montgomery County, Maryland, less than 15 miles from the heart of Washington, D.C. Established by the not-for-profit Glenstone Foundation, the museum opened in 2006 and provides a contemplative, intimate setting for experiencing iconic works of art and architecture within a natural environment. The museum includes its original building, the Gallery, as well as additional structures opened in its 2018 expansion: the Arrival Hall (LEED platinum), the Pavilions and the Cafe (both LEED gold). 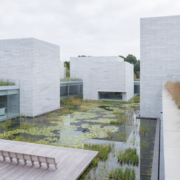 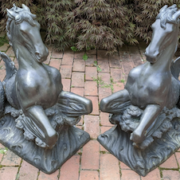 Set representing all Declaration of Independence signatories at Heritage, June...
Scroll to top