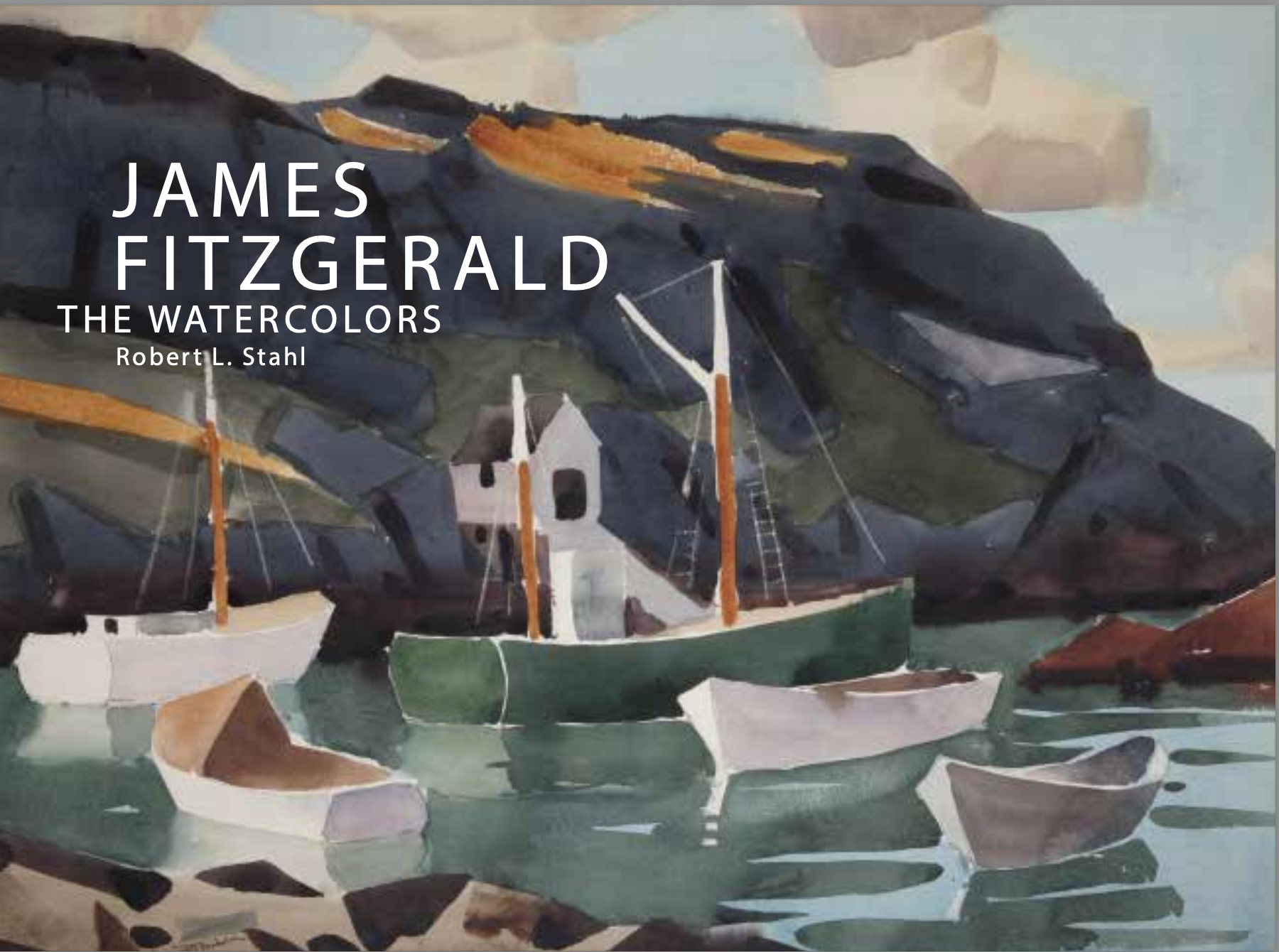 MONHEGAN ISLAND, Maine — James Fitzgerald: The Watercolors, Volume II Catalogue Raisonne, released on Tuesday, July 5, is an in-depth study of painter James Fitzgerald’s creative output in watercolor from his early days in Boston to his final journey to Ireland. In the interim, Fitzgerald lived in California, where he garnered considerable critical acclaim before settling on Monhegan Island, Maine, where he gradually withdrew from the commercial art world. Maintaining that self-promotion only served as a distraction, he focused his energies solely on painting, following a philosophical approach based on Eastern thought. Immersed in nature, Fitzgerald created artwork that sought to capture what he called the “spirit and beauty” of his wide range of subjects. More than 400 full-color reproductions are featured in this volume, including work created on travels to New Mexico, Vermont, Tennessee, Katahdin in northern Maine, Alaska, Nova Scotia and Ireland. The hardcover publication is priced at $70.

James Fitzgerald (American, 1899-1971) chose to leave his artistic legacy to others, believing that it would be taken care of after he died. Since 2004, the James Fitzgerald Legacy at the Monhegan Museum of Art & History has furthered that goal. James Fitzgerald: The Watercolors continues the detailed exploration of the artist’s career published in Volume I: James Fitzgerald: The Drawings and Sketches, presenting a synthesis drawn from the legacy’s archival database and catalogue raisonne. These volumes delve into Fitzgerald’s life, thinking and creative process, seeking to create a cohesive visual narrative of his artistry as it evolved and blossomed along his unique personal journey. 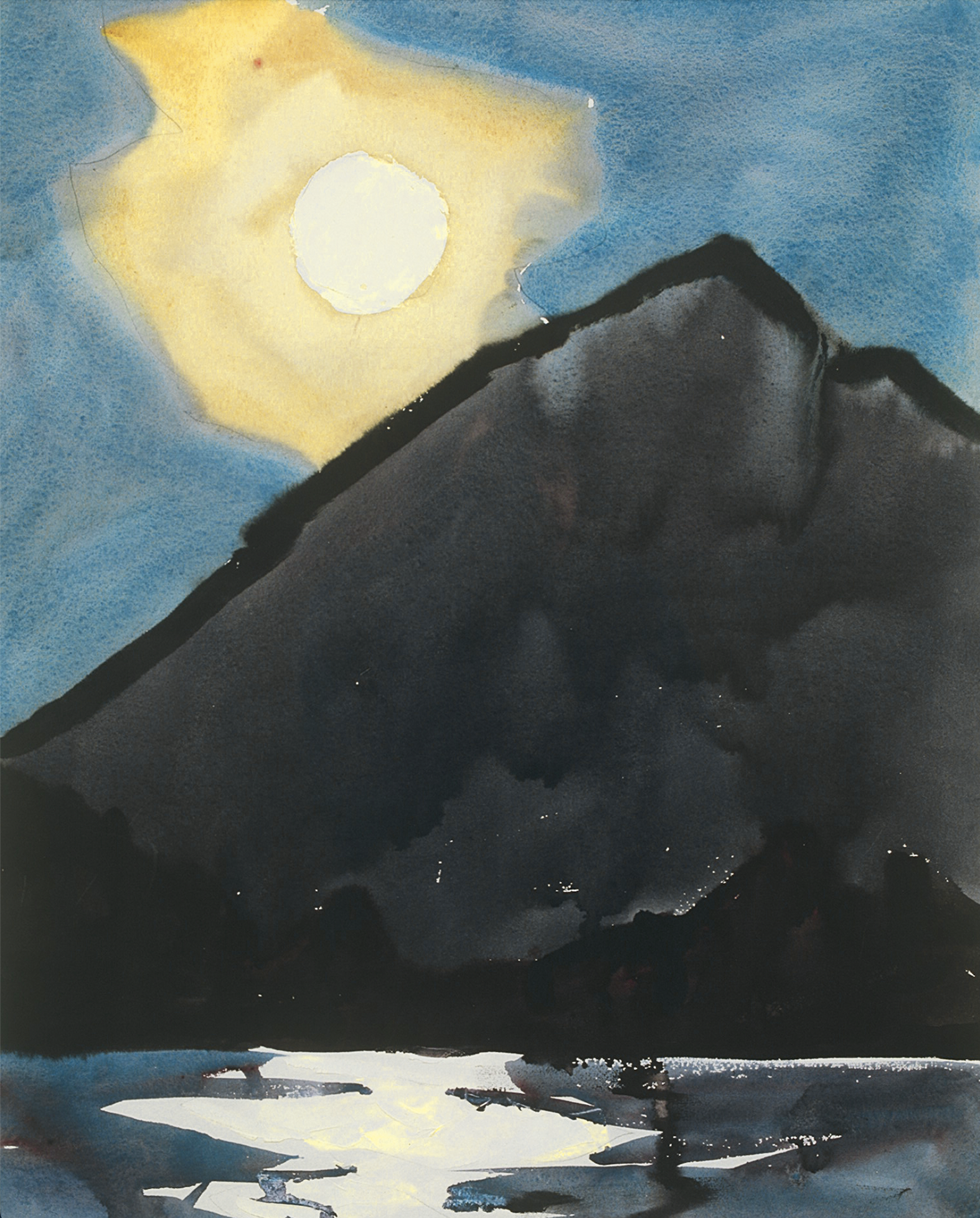 James Fitzgerald, ‘Moonlight, Katahdin,’ circa 1965. Watercolor and Chinese ink with oil over graphite on paper, 23 by 18 1/2in. James Fitzgerald Legacy, MMA&H

In conjunction with the release of this volume, the Monhegan Museum of Art & History is celebrating the artist in the exhibition The Odyssey of James Fitzgerald, which opened on July 1 and will remain on view through September 30.

About the Contributors
Robert L. Stahl was director of the James Fitzgerald Legacy from 2004 to 2021, and since 2009 has led the Fitzgerald catalogue raisonne project. He is the author of James Fitzgerald, The Drawings and Sketches, Selections From the Catalogue Raisonne, which was released in 2017. Stahl shepherded the inclusion of the Kent–Fitzgerald sites into the Historic Artists’ Homes and Studios program of the National Trust for Historic Preservation. 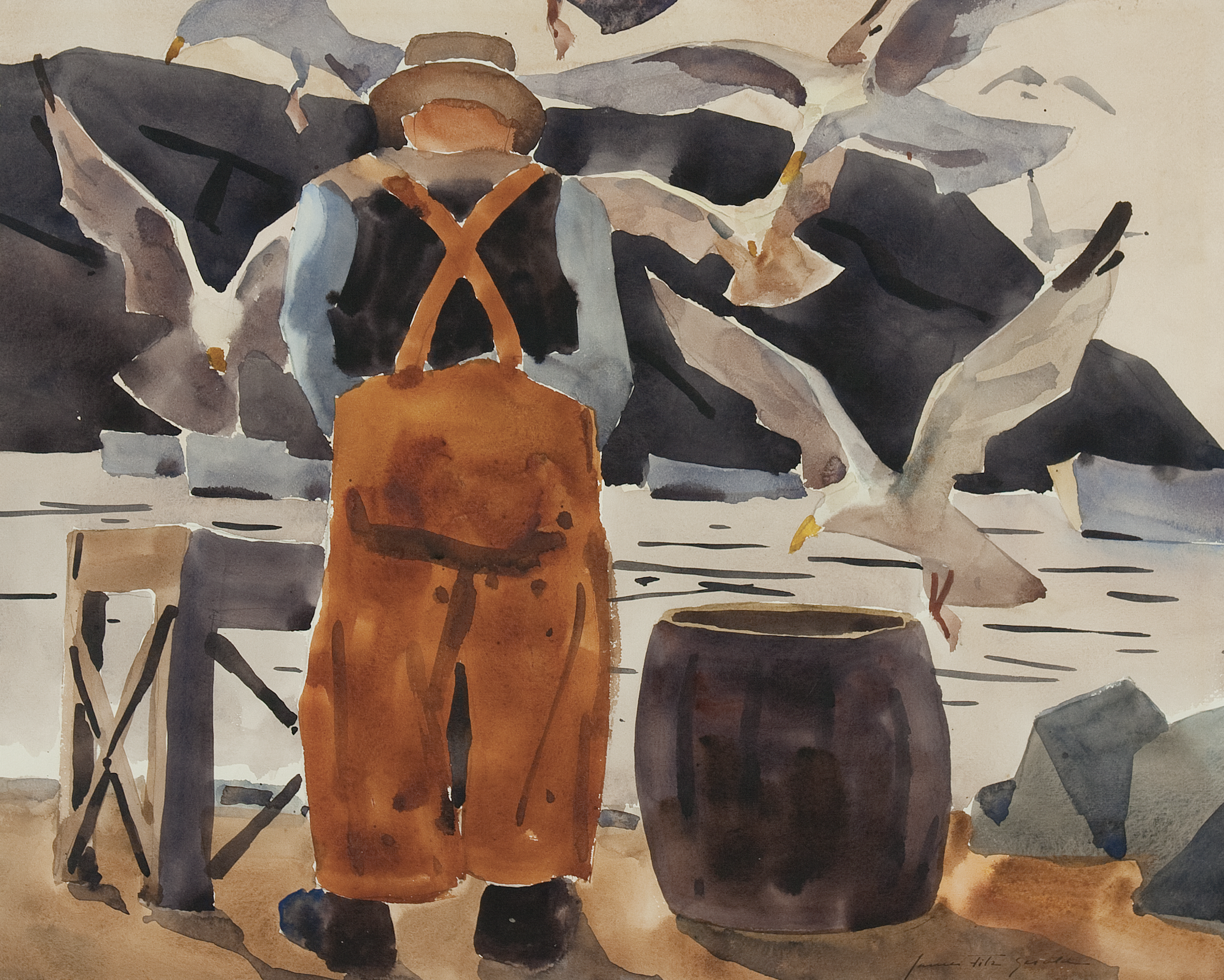 Susan Strickler was director of the Currier Museum of Art, Manchester, New Hampshire, from 1996 to 2016; Judith Walsh is professor emerita, SUNY Buffalo State College, Buffalo, New York, having served as professor of paper conservation (2005–2016); Susan Shillinglaw is professor of English emerita at San Jose State University, where for 18 years she was the director of the Center for Steinbeck Studies and also the President’s Scholar (2012–2013). 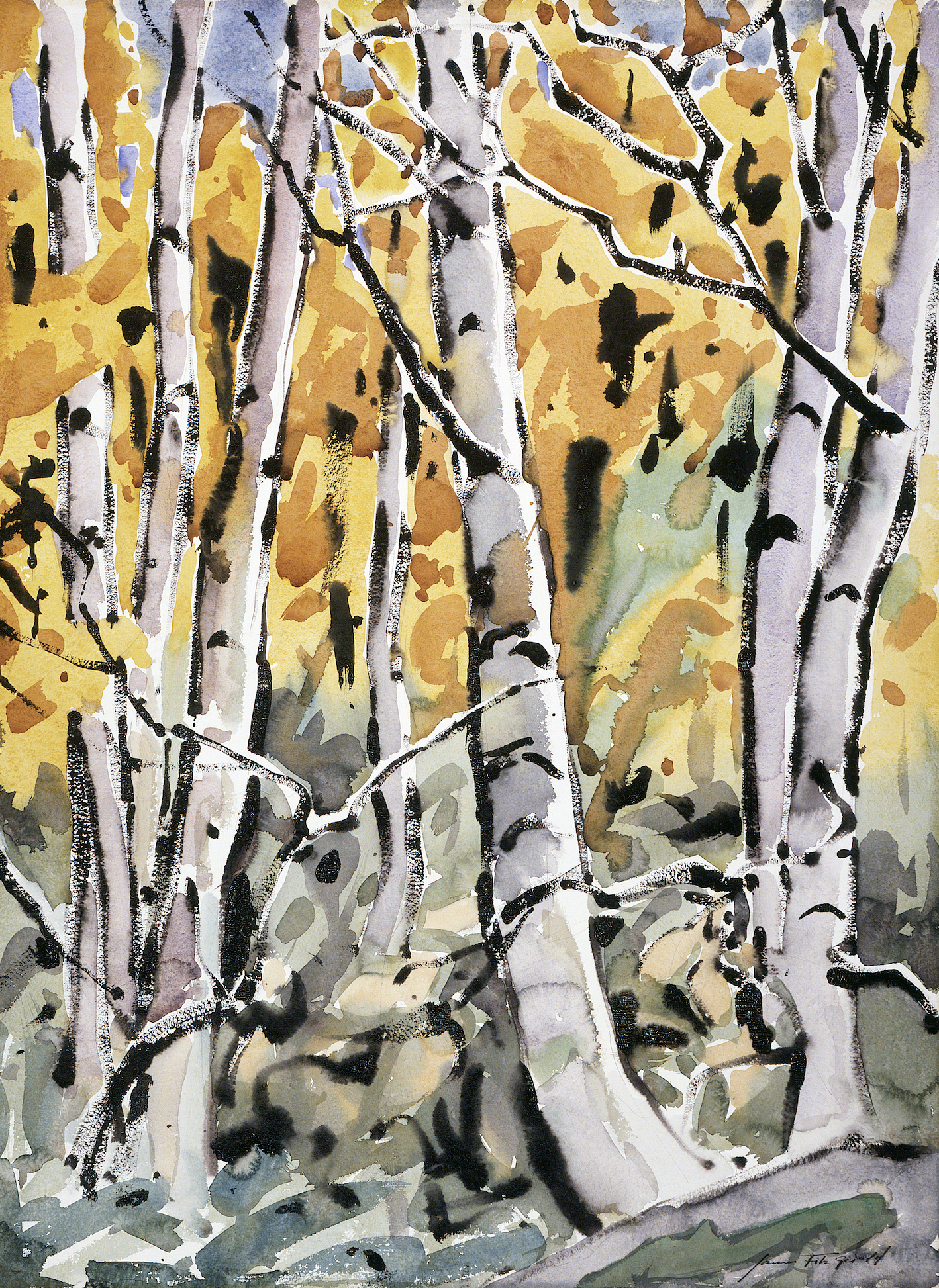 About the James Fitzgerald Legacy at the Monhegan Museum of Art & History
The Monhegan Museum of Art & History was given the James E. Fitzgerald estate by Anne M. Hubert, his surviving heir, in 2003. The estate includes the Hubert collection of paintings by James Fitzgerald, the artist’s library, and an archive of original papers and artist’s materials pertaining to his life and work, along with his house and studio on Monhegan, which were built and occupied by artist Rockwell Kent during the first decade of the 20th century. For more information, visit www.JamesFitzgerald.org. 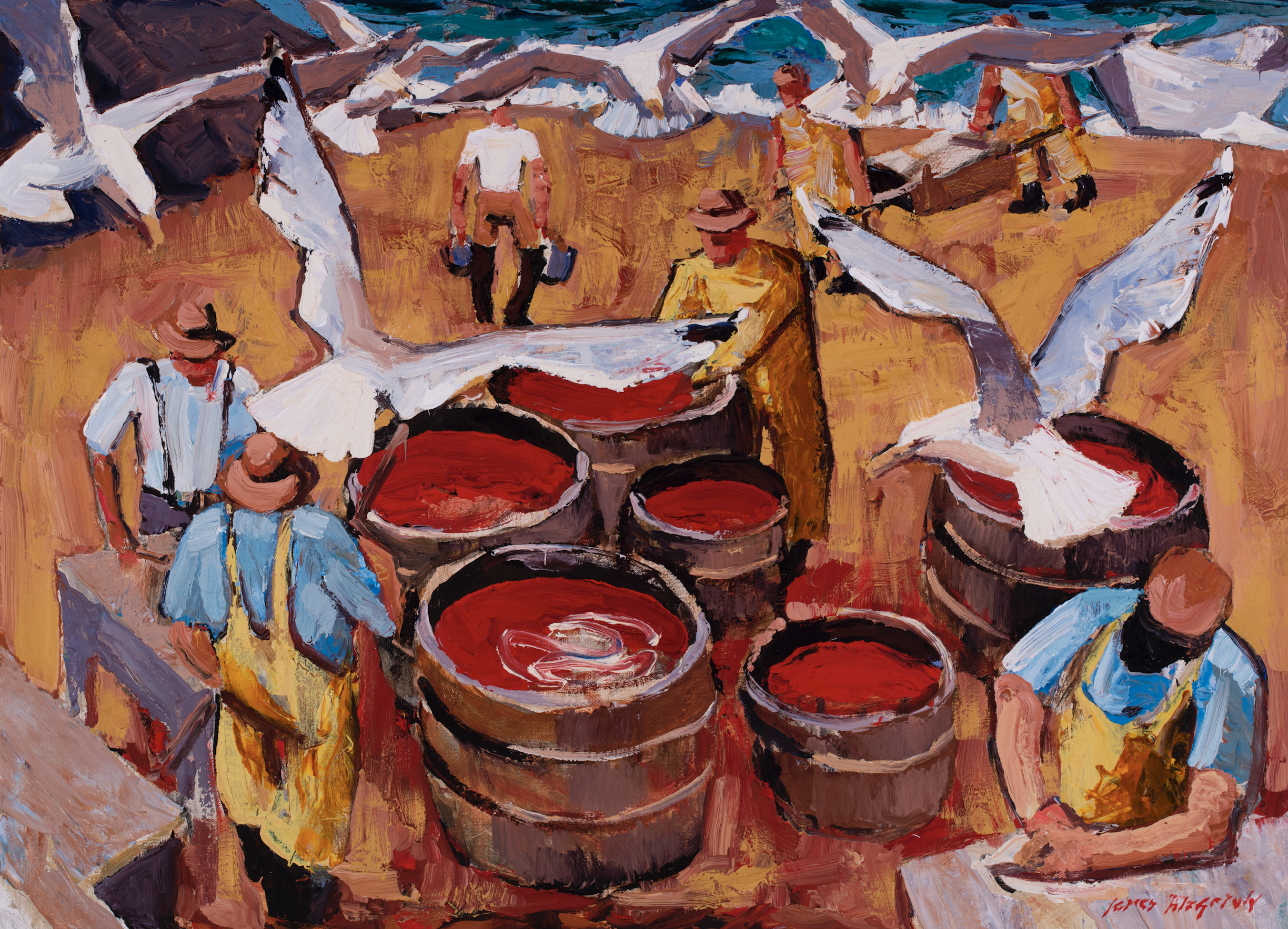 James Fitzgerald, ‘Saltin’ Mackerel,’ circa 1960. Oil on canvas, 30 by 40in. Collection of Stephen S. Fuller and Susan D. Bateson

About the Monhegan Museum of Art & History
The Monhegan Museum of Art & History is located in the historic Monhegan Island Light Station, 12 miles off the coast of Maine. The Monhegan Light Keeper’s House contains exhibits about the island’s history, art and nature; and the Assistant Keeper’s House holds a gallery that features exhibitions from the museum’s art collection, which spans more than 160 years. Additionally, the Rockwell Kent/James Fitzgerald Historic Artists’ Home and Studio display a collection of works by Fitzgerald. The museum is open daily from June 24 through September 30, during which time the Kent/Fitzgerald Home and Studio are open three days a week and by appointment. For more information, visit www.monheganmuseum.org.