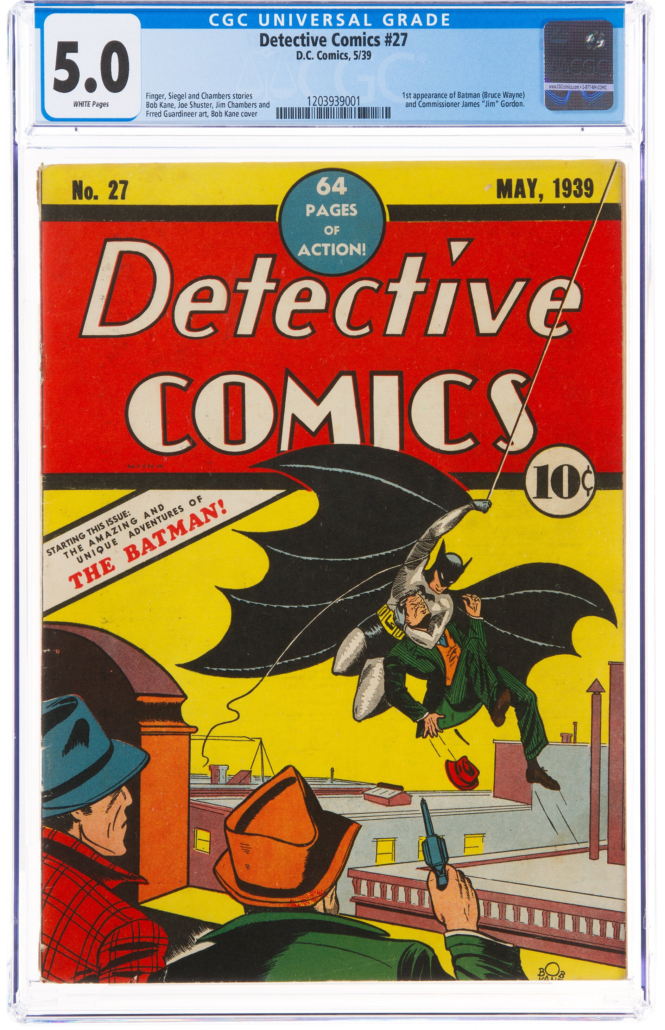 Copy of Detective Comics No. 27, featuring the debut of Batman, which sold for $1.125 million

DALLAS  – Another Comics & Comic Art event has come to an end at Heritage Auctions. And yet another world record has been set: a $22.4-million sale abundant with historic highpoints.

Only two months ago, Heritage’s April auction of comic books and original comic art surpassed the $16.5-million mark, which was once an unfathomable number – and one now obliterated by the success of the June 17-19 event that topped it by nearly $6 million. Nearly 5,800 bidders from around the globe participated in the market-resetting sellout affair, which marked the debut of the Promise Collection Pedigree featuring some 5,000 Golden Age books not seen since they were bought off newsstands in the 1940s.

“I remember when we were thrilled to have $15 million in comic and comic art sales for an entire year,” says Heritage Auctions Vice President Barry Sandoval. “And this was more than $22 million in just three days.”

Indeed, in the span of just four hours, 181 books from the Promise Collection sold for a total of $7.1 million – a staggering sum that made it among the most expensive collections ever sold, even before 93 more books hit the block Saturday to raise the weekend’s Promise Collection total to $7.9 million. And there are still more than 4,700 books from the collection left to auction throughout 2021 and well into 2022.

And the auction’s first session alone realized more than $5.9 million. In just one hour.

The kickoff was led by a Dark Knight having another very good day: A copy of Detective Comics No. 27 graded CGC VG/FN 5.0 sold for $1.125 million, not so far removed from the record realized in November when Heritage sold a Detective No. 27 graded FN/VF 7.0 for $1.5 million.

In any another sale, that 5.0 Detective would have been the headline, but Batman’s debut was overshadowed during the June 17 kickoff by two record-shattering lots, with many more to follow in later sessions.

During that first session, Wally Wood’s cover for 1952’s Shock SuspenStories No. 6 sold for $840,000 to claim its new title as most expensive work of original American comic book cover art. This should not surprise, as the cover is the most iconic published during the influential 12-year run of EC Comics and was a perfect storm of creator and content: Wally Wood takes on the Ku Klux Klan.

As Sandoval said when introducing the cover at auction, “This is nothing less than one of the most remarkable pieces of comic art we’ve ever offered in our history.” Its final price only served as further, and final, confirmation.

“I am especially pleased that Wally Wood’s cover to Shock SuspenStories No. 6 is now a world-record-holder, as it deserves its place in not only comic-book history but American history,” says Heritage Auctions Co-Chairman Jim Halperin. “It’s a powerful work and a reminder of how far ahead of its time EC Comics was.” 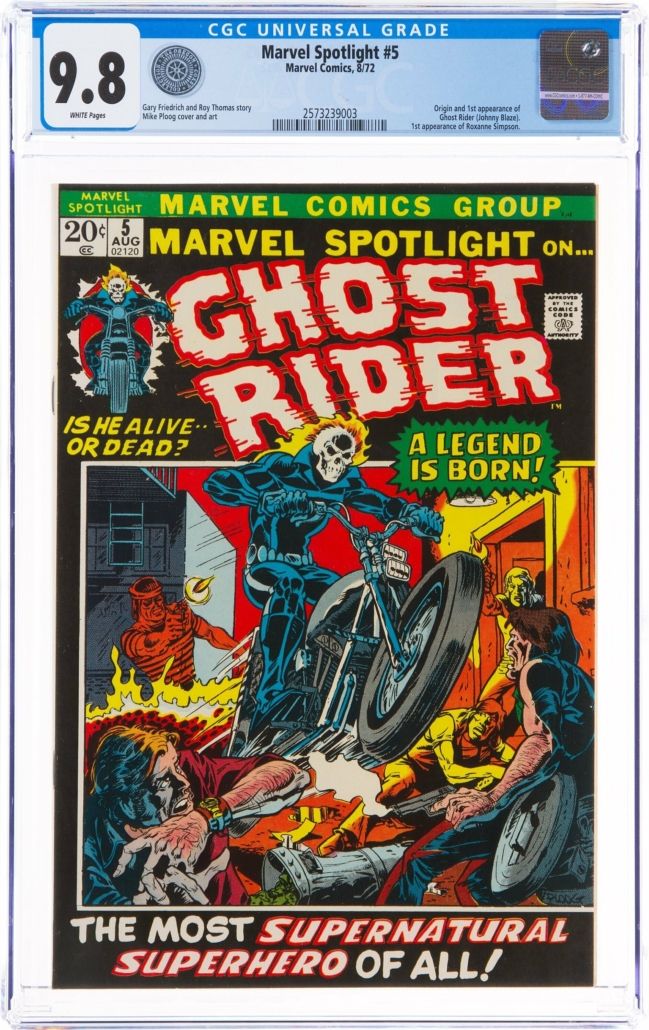 History was also made in that first session when “the most supernatural superhero of all” rode off with the title of The Most Expensive Comic Book of the 1970s. Ghost Rider’s debut in 1972’s Marvel Spotlight No. 5 sold for $264,000. That more than quadrupled the previous auction record for a 1970s book set by X-Men No. 94, which Heritage Auctions sold on April 1 for $63,000.

Wood’s work was among myriad pieces of original art to sell in the six figures during the three-day event. In fact, as Sandoval notes, “We had 19 pieces of comic art sell for more than $50,000, and 17 of them brought more than I expected – some exponentially more.”

Among those top lots was a work by an illustration giant who holds some world records himself: Frank Frazetta, whose peak-period original cover for the 1969 Popular Library paperback Outlaw World sold for $408,000. And an extraordinary (and extraordinarily prescient) work from Robert Crumb – the complete five-page story “Let’s Talk Sense About This Here Modern America” from 1975’s Arcade the Comics Revue No. 2 – sold for $312,000. 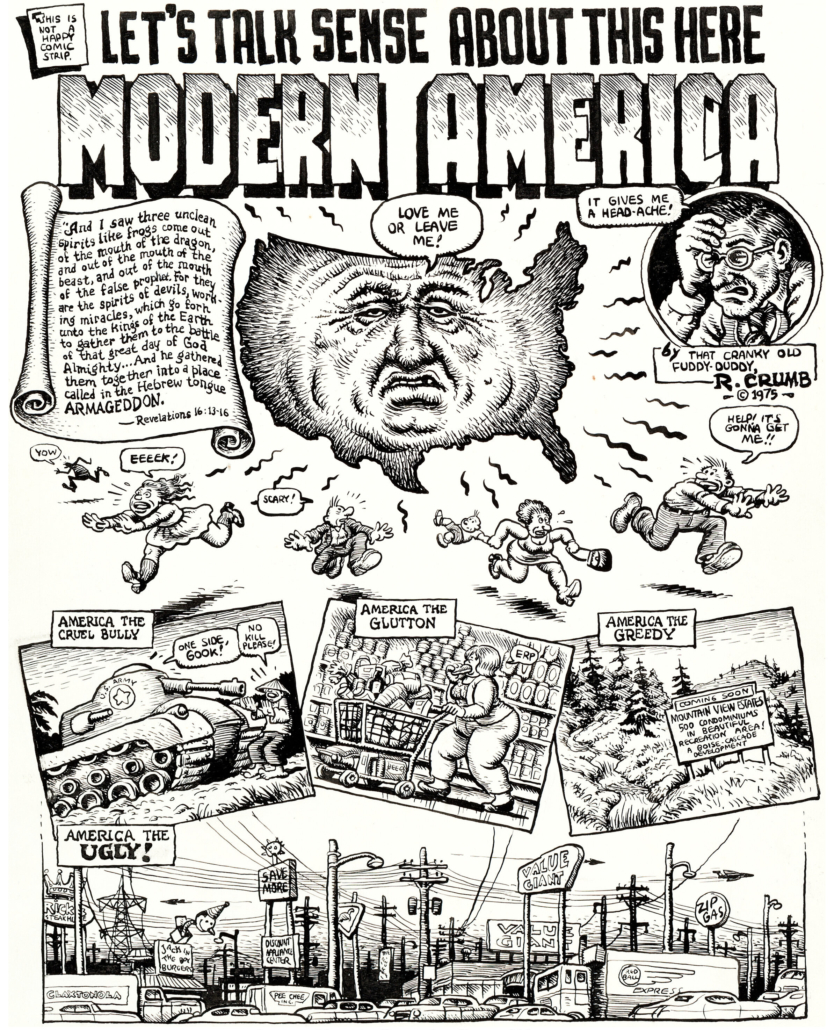 Complete five-page R. Crumb story ‘Let’s Talk Sense About This Here Modern America,’ from Arcade the Comics Revue No. 2, which sold for $312,000

Close behind that was one of those original works that sold for far more than Sandoval or anyone else could have anticipated: Barry Smith’s original cover for Conan the Barbarian No. 2 from 1970. The earliest Conan cover ever offered by Heritage realized $264,000.

Two Jack Kirby masterpieces also sold for six figures during the three-day event’s first hour: Page 21 from The Avengers No. 1, featuring Loki among the marvelous icons, realized $180,000. And a September 1966 illustration made for Esquire featuring Spider-Man, Captain America, and the roster of Marvel heroes brought $168,000.

Steve Ditko original Spider-Man pages are about as rare as radioactive spiders. So it’s no surprise Page 17 from Amazing Spider-Man No. 34 sold for $144,000. But you didn’t have to be a superhero to get in on the action in this auction: Dan DeCarlo and Rudy Lapick’s five-page story introducing Sabrina the Teen-Age Witch, which appeared in 1962’s Archie Madhouse No. 22, realized $114,000.

Friday’s introduction of The Promise Collection will go down as one of the most thrilling afternoons in Heritage’s history. As Heritage Auctions Vice President Lon Allen said moments after that $7-million first session: “We were just blown away.”

The Promise Collection was assembled by a young boy who grew up, went to war and never returned, and whose books protected for decades by the brother who vowed to keep his comic books safe. Befitting not only its origin story but its enviable roster of near-mint, best-ever must-haves, bidding during Friday’s session was spirited and then some, and set numerous records.

Several books, in fact, reached previously unfathomable levels, among them an issue of Detective Comics No. 140 graded CGC NM+ 9.6. When the lot finally closed after an extended round of bidding, this issue featuring The Riddler’s debut reached a final price once seen for famous first issues: $456,000. Previously, the highest price ever recorded for that book was the $40,800 a CGC VF 8.0 realized at Heritage Auctions in July 2020. 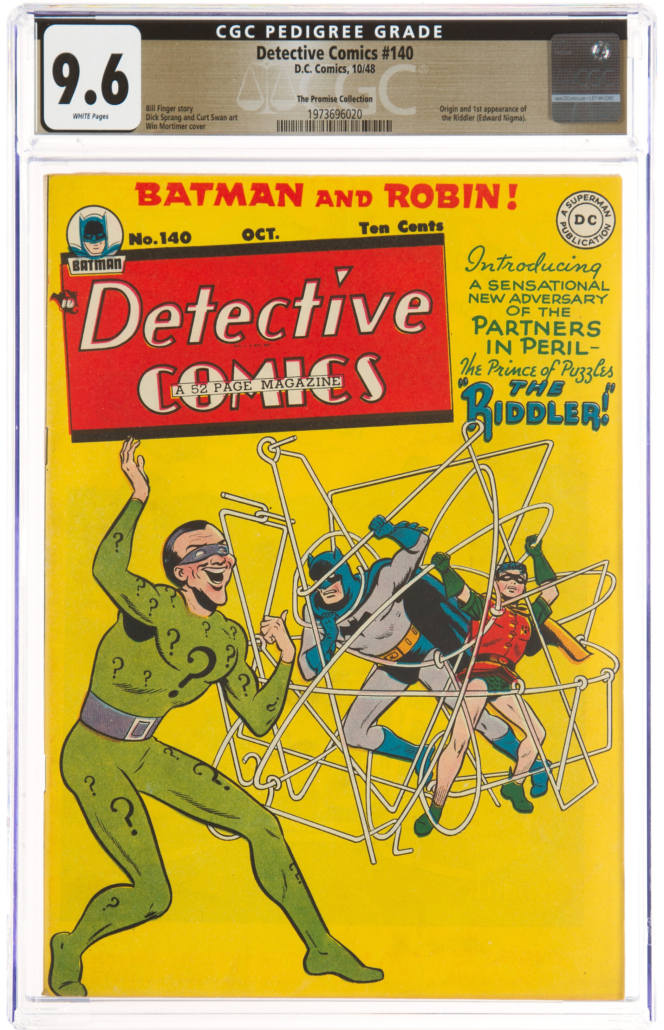 Not long after that, Phantom Lady No. 17 from 1948 sold for the same price – in large part thanks to its Matt Baker cover, one of the most iconic of the Golden Age in part due to its inclusion in psychiatrist Fredric Wertham’s Seduction of the Innocent. This $456,000 sale price was more than triple the previous auction record of $121,000 set in September 2019 for the Mile High copy in CGC NM 9.4, which, prior to the discovery of the Promise Collection, had been considered the single finest example. Of course, the copy found in the Promise Collection, bearing a CGC NM+ 9.6, is now the highest graded – a phrase repeated often during the Promise Collection sessions, which also saw two Captain America Comics issues from 1944 sell for more than $200,000 each.

“I certainly haven’t experienced an auction with such intense bidding on every single lot as we had for the Promise Collection on Friday and Saturday,” Sandoval says, “It’s not as though we haven’t had great Golden Age collections before; two others come to mind in recent years. But those other exceptional key-laden pedigree collections each sold in the $2 million-$3 million range. The results from the Promise Collection, as well as the rest of this auction, show how much the market has changed.” 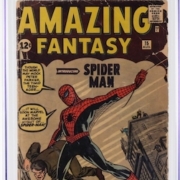 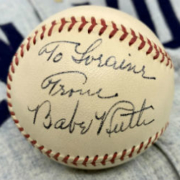 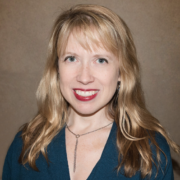 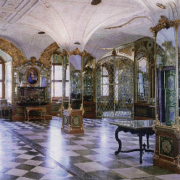 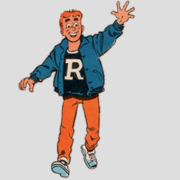 The art of the garden: ideas for exterior decorating
Scroll to top