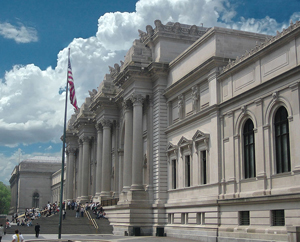 NEW YORK – A gift of $10 million to the Metropolitan Museum of Art by Lizzie and Jonathan Tisch will support the creation of a major exhibition space within its Costume Institute. This gift will allow the museum to proceed, beginning in 2012, with the complete renovation of its costume-related exhibition galleries, study collection and conservation center, it was announced Tuesday by museum director Thomas P. Campbell.

The new 4,200-square-foot gallery—to be named the Lizzie and Jonathan Tisch Gallery—represents a fundamental change in the museum’s approach to its costume collection as visitors will now be able to view some aspect of these holdings at least 10 months of the year. These rotating installations will examine fashion through conceptual approaches and connoisseurship and will bring visitors into a close dialogue with the works on display.

“This gift is truly transformative,” said Campbell. “The Lizzie and Jonathan Tisch Gallery is designed as a distinctly flexible space, so the possibilities for creative interpretations of the collection are unlimited. We thank and applaud Lizzie and Jon Tisch for their generosity and for taking a leadership role to launch this project.”

“We are so pleased to help the Met, one of New York City’s great cultural institutions, make their unique and historic collection more accessible to its millions of visitors each year,” said Lizzie and Jonathan Tisch. “In today’s world, fashion, art and culture are becoming more intertwined, and the renovation of the Costume Institute will give this inter-relationship the proper focus it deserves at the museum. The new gallery will allow young designers and students to see and learn while advancing both art history and the art of fashion design.”

The renovation will also include a new costume conservation center and an expanded and updated study/storage facility that will house the combined holdings of the Met and the Brooklyn Museum Costume Collection, which was transferred to the Metropolitan Museum in 2009. Adjacent to the new Tisch Gallery, the Carl and Iris Barrel Apfel Gallery will be refreshed and function as critical introductory space to the Costume Institute holdings.

Harold Koda, curator in charge of the Costume Institute, said, “This project makes possible the museum’s dramatic rethinking of the display of historic costume and contemporary fashion. The current galleries with their fixed vitrines and established flow will be transformed into a space that maximizes the ability of the museum to present its costume holdings in new and varied ways. A range of visual effects will also be employed to underscore the conceptual and narrative intentions of the changing exhibitions installed in this space.”

Founded in 1937, the Museum of Costume Art, after its incorporation and renaming as the Costume Institute, became a part of the Metropolitan Museum in 1946. Currently it contains a collection dating from the 17th century to the present, including fashionable dress and regional costumes from Europe, Asia, Africa and the Americas. In 2009 the Brooklyn Museum transferred its important costume collection, amassed during more than a century of collecting, to the Costume Institute, where it is known as the Brooklyn Museum Costume Collection at the Metropolitan Museum of Art. The combined collections of more than 35,000 pieces—supported by the Irene Lewisohn Costume Reference Library, among the world’s foremost fashion libraries—now constitute one of the largest and most comprehensive costume collections in the world, offering an unrivaled timeline of Western fashion history.

Charles James exhibit to open in May at Met Museum