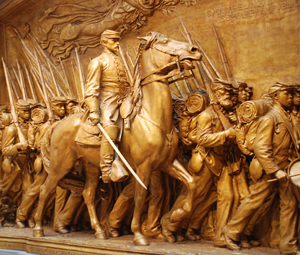 WASHINGTON (AP) – Months after the Emancipation Proclamation was signed 150 years ago, the first unit of black Northern soldiers was organized as the 54th Massachusetts Regiment and went on to fight at Fort Wagner in South Carolina during the Civil War.

The group’s memory is enshrined in the 116-year-old bronze Shaw Memorial by Augustus Saint-Gaudens on the Boston Common. It was built to honor Col. Robert Gould Shaw, who led the regiment and died in battle.

Now, the National Gallery of Art in Washington has organized the exhibition “Tell it with Pride,” opening Sunday, to explore the black soldiers honored in the memorial. The gallery holds and exhibits Saint-Gaudens’ original painted plaster sculpture of the Shaw Memorial, which won a grand prize for sculpture at the 1900 Universal Exposition in Paris. It is considered among the finest examples of 19th century American sculpture.

The museum has amassed photographic portraits and writings from across the country of many of the soldiers and their Civil War-era recruiters and teachers, who included Frederick Douglass, Sojourner Truth and Harriet Tubman. An original copy of the Emancipation Proclamation that was among those sold to raise funds for Union troops also is displayed, as well as the first Congressional Medal of Honor awarded to a black soldier after the battle at Fort Wagner.

“Until President Abraham Lincoln signed the Emancipation Proclamation on Jan. 1, 1863, none of these African-American men had been allowed to wear the Union blue; none had been allowed to carry a gun to defend their country; and even their very bravery and their dedication to their country had been questioned,” curator Sarah Greenough said at an exhibition preview. “Yet their heroic stance at Fort Wagner began to silence such questions.”

Abolitionists supported the regiments’ formation. Douglass sent two sons into the regiment and recruited other men from Boston and Rochester, N.Y. Truth recruited from Michigan. In total, the black regiment was made up of men from 15 states, including all four border states and five Confederate states; Canada; and the West Indies.

The 1989 film Glory, starring Matthew Broderick, Denzel Washington and Morgan Freeman, was based on the story of the 54th regiment.

The battle’s results were devastating, though. About a third of the regiment’s soldiers sent into battle were killed, wounded or missing as the Union forces were defeated.

Still, there was pride in the effort, according to accounts from the time.

“The regiment established its reputation as a fighting regiment, not a man flinched, though it was a trying time … ” Sgt. Maj. Lewis Douglass wrote home to his fiancee. “I wish we had a hundred thousand colored troops—we would put an end to this war.”

An anonymous letter to Shaw’s family announcing his death noted that the 54th regiment had marched side by side with white regiments and urged them to “tell it with pride to the world.”

One newspaper wrote that it was a battle for the centuries, “and the black man there won his place among the freemen of the age and wiped out the stain of servitude.”

The unit even fought to ensure equal pay for its service. When the promise of a $13 monthly wage equal to white regiments was cut to $10, the 54th regiment refused payment unless they would receive what they’d been promised. As a result, they received no pay for 18 months, said Carl Cruz, the great-great-grandnephew of Sgt. William H. Carney, who was awarded a Medal of Honor for his service.

“Every time I think of the men of the 54th,” Cruz said, “I am overwhelmed and awed by their acts and deeds.” 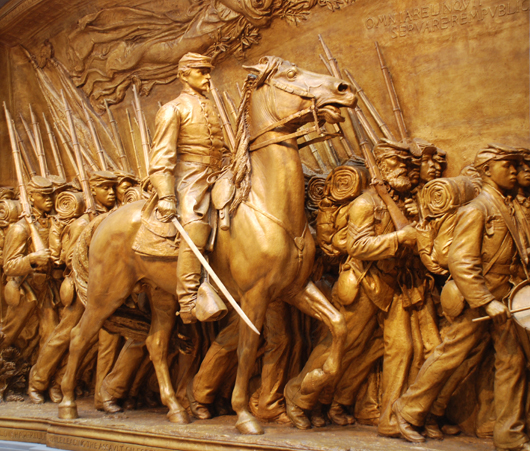