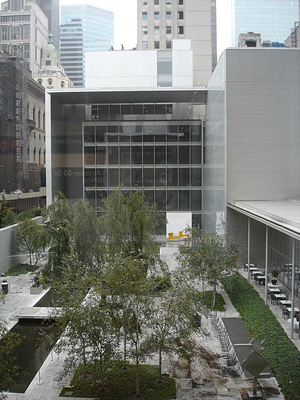 The Museum of Modern Art, New York City, is one of the more than 600 museums offering free admission to military families this summer. 2005 photo by hibino, licensed under the Creative Commons Attribution 2.0 Generic License. Courtesy Wikipedia.

WASHINGTON (AP) – More than 600 museums nationwide are offering free admission to military families all summer in a new partnership with the National Endowment for the Arts.

The list includes some of the nation’s premier art museums, including New York’s Museum of Modern Art and the Art Institute of Chicago, as well as science centers, children’s museums and other sites in all 50 states.

The program, called Blue Star Museums, is being announced Monday in San Diego, where 14 museums will participate. The offer for active duty military personnel and their families runs from Memorial Day through Labor Day.

It was the brainchild of Kathy Roth-Douquet, chairwoman of the group Blue Star Families. Her husband, Marine Corps Col. Greg Douquet, is on his third deployment to Afghanistan.

“You can feel a little alone in America right now, being part of the 1 percent that’s involved in fighting these wars,” she said, adding that the recession has changed priorities for many people. “When the kids and I go to museums this summer, we know we’re being welcomed. It will make us feel less alone.”

Roth-Douquet, who lives in Parris Island, S.C., said military bases are sometimes far from cultural centers, though museums can be a good escape.

The Defense Department is helping to promote the offer, and Roth-Douquet said some military bases may coordinate bus trips.

When her family was based in London for a time, she and her son and daughter spent an entire summer visiting museums because many were free. As a result, she said, her 8-year-old son Charlie now draws for hours each day.

This summer, they’re planning a road trip along the East Coast to visit museums. Normally, a $20 ticket to MoMA in New York might rule it out, she said. Now they could also stop for free at Washington’s Corcoran Gallery of Art or New York’s Jewish Museum.

NEA Chairman Rocco Landesman said he was surprised by how many museums joined the effort, despite the poor economy, from the Alaska Aviation Heritage Museum to the International Quilt Study Center and Museum in Nebraska.

“I think it is good karma for the museums,” he said. “Long-term, it promotes museum-going and engagement with the arts.”

National Endowment for the Arts: http://www.arts.gov/bluestarmuseums

Recession forcing museums to do more with less

Thousands of pieces of slave pottery found in S.C.