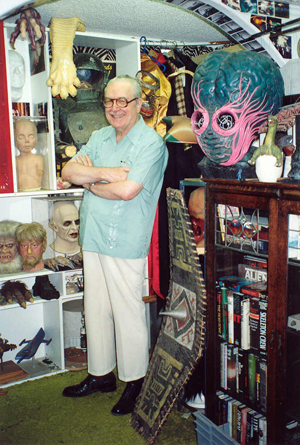 The late Forrest J. Ackerman, surrounded by part of his collection at the ‘Ackermansion.’ Image courtesy of Wikimedia Commons.

One day, when he had a few spare minutes, Keith Reynolds went searching for the fictional furry animal.

“Being a big Star Trek nerd, I knew this was in the collection and I needed to find it,” the archives specialist said.

Trekkies know this: Tribbles are trouble.

There can never be just one. They multiply. They eat everything in sight.

So when Reynolds found the tribble, the rest of the Forrest Ackerman Collection consumed him. He started digging through the 90 cubic feet of manuscripts, posters, movie stills and correspondence. Reynolds grew up with Star Trek: The Next Generation, and Ackerman’s science fiction materials sucked him in.

He asked if he could process the collection.

“I wanted to be the one who did it,” Reynolds said.

The University of Wyoming’s American Heritage Center produces one new exhibit a year, and associate director Rick Ewig called dibs on a Forrest Ackerman Collection exhibition. Since Reynolds was processing the collection, the two decided to co-curate.

The result is “Terror in the Theater: Fifties Fears,” an exhibit of movie posters and props that shows how 1950s science fiction films reflected American anxieties toward atomic weapons, communism and the Soviet Union in the Cold War era. The exhibit includes the tribble from the 1967 Star Trek episode The Trouble with Tribbles and a small-scale stop-motion triceratops model used in King Kong.

Ackerman was a writer and editor who published the first science fiction fan magazine in 1932. He is credited with creating the term “sci-fi” and in 1953 won the first and only “Hugo” award for science fiction.

By his death in 2008, Ackerman had grown the largest collection of science fiction memorabilia.

Ackerman had no connection to the state, but he gave a portion of his collection to University of Wyoming.

Outside of governmental archives, the American Heritage Center is one of the largest archives in the U.S. with 75,000 cubic feet of documents and artifacts, Ewig said. In the 1970s, the center began collecting papers and items important to the entertainment industry, performing arts and popular culture, and it was one of the few archives to do so. As a result, the center acquired items including actress Barbara Stanwyck’s Oscar, comedian Jack Benny’s papers and a collection of manuscripts, drafts, notes, files and other materials from Stan Lee, the creator of the Avengers, Fantastic Four, Hulk, Iron Man, Spider-Man and X-Men.

Ackerman’s collection fit right in. His things trickled in for about a decade beginning in the 1980s, one box at a time.

Much of the memorabilia from the “Ackermansion” was sold at public auction.

“It was shattered and sent everywhere,” Reynolds said.

But the papers that made it to the University of Wyoming tell many stories. Reynolds has been processing the collection for about a year and has 10 cubic feet left to go. It took two months just to work through the photos, which include movie and television stills.

Before work began on the “Terror in the Theater” exhibit, the center was asked to create a small exhibition on Frankenstein for Laramie County Community College.

“I knew that Ackerman had these wonderful movie posters,” Ewig said.

Looking at the posters, he decided he wanted to do something on science fiction films. Ewig did his graduate school work on McCarthyism and saw a natural tie between history and the sci-fi world. In January, Ewig and Reynolds went through all the posters and identified several prevailing themes: fear of technology and its consequences, alien invasion of Earth and the effects of radioactivity.

The triceratops was the only item to come from outside the Forrest Ackerman Collection. The model, part of the Sam Peeples Collection, was made for the 1931 film Creation, which was never finished. Scenes of the dinosaur were added into the original King Kong but later edited out of the final version because they were too violent, according to the exhibit.

To keep the exhibit on topic and manageable in size, Ewig and Reynolds had to exclude many materials they found interesting. For what is shown, there are dozens of boxes filled with documents behind the scenes.

One of Reynolds favorites is a letter written by a little boy, sent in care of Forrest Ackerman. When Reynolds found it in the collection, it hadn’t been opened. The boy was trying to reach an artist named Delgado who worked on dinosaur models like the triceratops. He sent it to Ackerman knowing he could get it to the artist.

Delgado died a week before the letter was sent, Reynolds said.

“It never reached its intended destination,” he said.