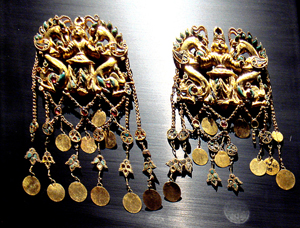 Included in the Bactrian Treasure are earrings from the royal burial Tillia tepe, first century B.C. in Bactria. Image by Musee Guimet. This file is licensed under the Creative Commons Attribution-Share Alike 3.0 Unported license.

KABUL, Afghanistan (AP) – Right down to the power cuts that frequently plunge its artifacts into shadow, the National Museum of Afghanistan is a symbol of the country’s decades of hardships. Its building was shelled, looted and caught fire during the 1990s civil war. Taliban extremists later smashed many centuries-old statues.

Now, the museum is slowly rebuilding, thanks to international efforts to return thousands of looted treasures – and to heroic Afghan staff members who hid its most priceless works during the war years and kept the secret for more than a decade.

The museum welcomed home nearly 850 Afghan artifacts in early August – including a 3,000-year-old Bronze Age ax, a first century ivory elephant carving and a life-size Buddha statue – that were either stolen from the museum or illegally excavated during decades of insecurity. The British Museum cataloged and helped return the pieces in cooperation with British authorities, who seized many from smugglers. It was the second major handover of Afghan historical pieces by the British Museum. In 2009, about 1,500 historical pieces were returned.

The aim is to restore the facility to its prewar reputation as one of the finest in the region, with displays ranging from the Bronze Age to more contemporary Islamic art.

With its gates topped with barbed wire and rifle-toting guards directing visitors to undergo body searches, the museum on Kabul’s outskirts carries the air of a culture still under siege.

Chief curator Mohammad Fahim Rahimi apologizes for the darkened halls during a recent visit to view one of the newly returned pieces. Like much of Afghanistan, the museum puts up with frequent power outages as the government struggles to provide basic services.

Minutes later, the power shudders back on and the museum lighting reveals its latest acquisition: a Buddha statue estimated at about 1,700 years old.

Looted from the museum during the civil war that followed the Soviet occupation, the statue turned up in Japan in a private collection before it was bought by an anonymous donor who arranged for the British Museum return to its Afghan home, Rahimi says. The statue is an example of art from Afghanistan’s long Buddhist history, before the arrival of Islam.

“This is simply our heritage,” Rahimi says. “If we have our heritage back, it’s everything for us.”

That’s a heritage that not all appreciate. In 2001, the Taliban dynamited a pair of giant Buddhas carved into a mountain in Bamiyan province. Around the same time, the Taliban also rampaged through the national museum, smashing any art depicting the human form, considered idolatrous under their hard-line interpretation of Islam. In all, they destroyed about 2,500 statues.

“You can see here, the hand is complete and the head is complete. It’s not broken,” he says.

He points out the finer points of the fourth century piece: the painstakingly carved folds of the robe; the chakra on the Buddha’s right hand, the streams depicting water flow from his feet and the images of flames rise from his shoulders – a representation of one of the Buddha’s first miracles, in which he levitated and produced fire and water to silence skeptics.

The “miracle” Buddha is the only the recently returned pieces from Britain that is on display so far.

Museum director Omara Khan Massoudi says the rest are still in boxes, waiting to be examined and eventually displayed. Cooperation with other museums and with UNESCO has been key to rebuilding the museum, which by 2001 had lost 70 percent of its artifacts to the years of war.

“Within these last 10 years, we’ve gotten more than 16,000 pieces, among them 9,000 returned from outside of Afghanistan,” Massoudi says.

Some of the pieces recently returned were stolen from the museum itself, but many others were illegally excavated and smuggled out of the country in past decades while war otherwise occupied Afghan authorities. It’s a practice that continues to this day, according to Massoudi.

“Unfortunately, some places, there is no security, sometimes it happens that people have illegal excavations,” he says.

Massoudi has devoted most of his life’s work to the National Museum, which he says was once renowned for having one of the region’s finest collections, with some 100,000 artifacts including millennia-old tools from some of the earliest human settlements. Established in the 1920s by Afghan King Amrullah Khan, the museum was still thriving when Massoudi joined it more than three decades ago.

But after Soviet troops withdrew from Afghanistan in 1989, museum workers became increasingly concerned as the country deteriorated into civil war.

So, in 1989, Massoudi and several other staff members packed up some of the most museum’s most treasured pieces – including the legendary “Bactrian gold,” an intricate collection of tens of thousands of gold and silver coins, crowns and jewelry more than 2,000 years old – and hid them in two locations in central Kabul, one of them a secret vault under Kabul’s central bank.

“Luckily, this decision gave us a good result when the civil war started in Kabul city,” Massoudi said. “The national museum artifacts were looted … but the artifacts we shifted to the two places in the center of the city.”

The pieces remained hidden until 2003, when the hidden treasures’ existence was revealed. Now the Bactrian gold and some of the other rescued artifacts are on a tour of museums around the world, having already been displayed in New York, Paris and London. The traveling exhibition is now in Norway and goes next to Australia.

Eventually, those treasures, too, will be returned to Afghanistan’s National Museum. Massoudi laments the facility still lacks such modern museum staples as humidity control and high-tech security – they’re still working on the electricity, after all. But he says the museum is seeking funds to build a new, modern home near the current building.

“We all together tried the best to rebuild … from zero,” he says. 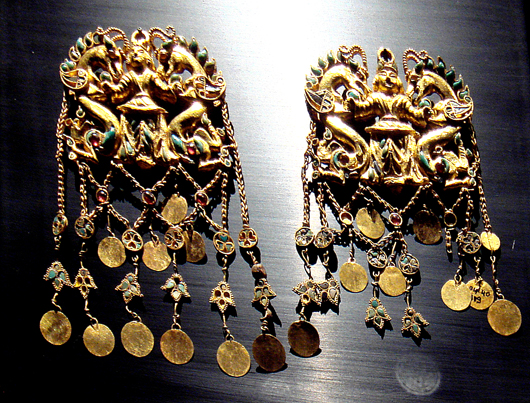 Included in the Bactrian Treasure are earrings from the royal burial Tillia tepe, first century B.C. in Bactria. Image by Musee Guimet. This file is licensed under the Creative Commons Attribution-Share Alike 3.0 Unported license.