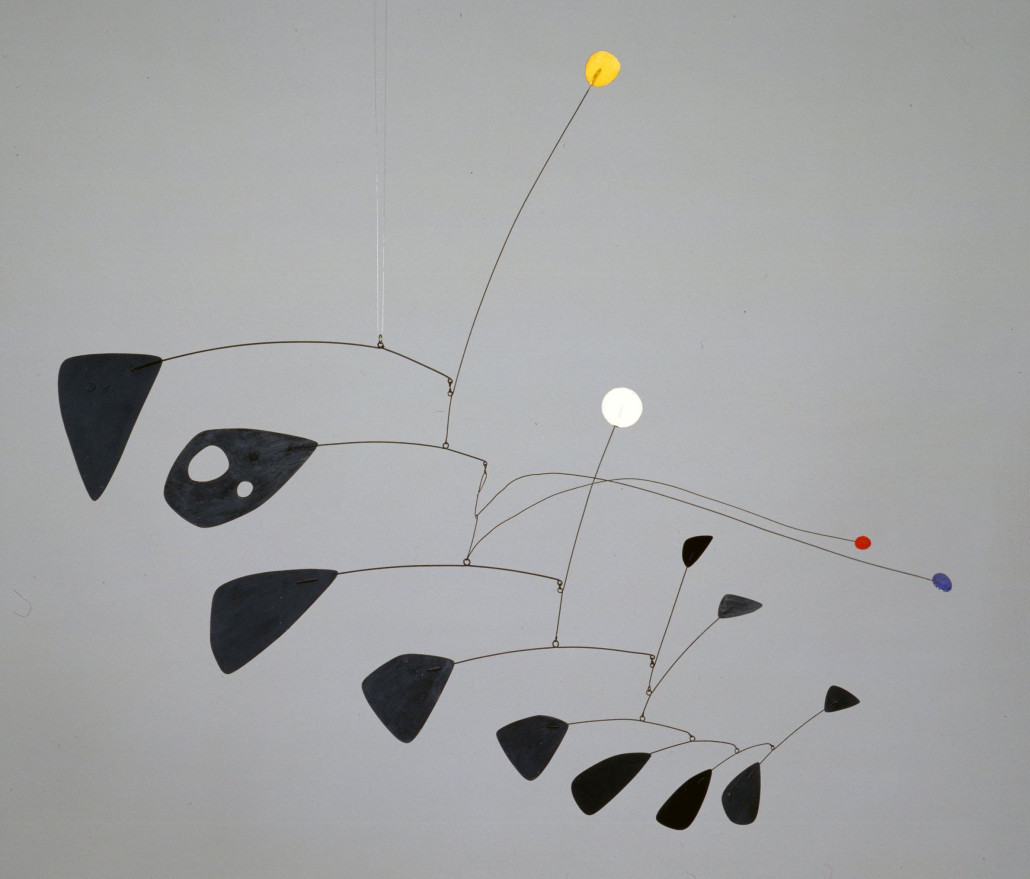 LONDON – Tate Modern presents the UK’s largest ever exhibition of Alexander Calder (1898-1976). Calder was one of the truly ground-breaking artists of the 20th century and, as a pioneer of kinetic sculpture, played an essential role in shaping the history of modernism. “Alexander Calder: Performing Sculpture,” on display Nov. 11 through April 3, 2016, brings together approximately 100 works to reveal how Calder turned sculpture from a static object into a continually changing work to be experienced in real time.

Alexander Calder initially trained as an engineer before attending painting courses at the Arts Students League in New York. He traveled to Paris in the 1920s where he developed his wire sculptures, and by 1931 had invented the mobile, a term first coined by Marcel Duchamp to describe Calder’s motorized objects.

The exhibition traces the evolution of his distinct vocabulary – from his initial years captivating the artistic bohemia of inter-war Paris, to his later life spent between the towns of Roxbury, Connecticut, and Saché in France.

The exhibition also features the figurative wire portraits Calder created of other artists including Joan Miró, 1930, and Fernand Léger, circa 1930, alongside depictions of characters related to the circus, the cabaret and other mass spectacles of popular entertainment, including Two Acrobats, 1929, The Brass Family, 1929 and Aztec Josephine Baker, circa 1929.

Following a visit to the studio of Piet Mondrian in 1930, where he was impressed with the environment-as-installation, Calder created abstract, three-dimensional, kinetic forms and suspended vividly colored shapes in front of panels or within frames hung on the wall. Red Panel, 1936, White Panel, 1936 and Snake and the Cross, 1936 exemplify the artist’s continuous experimentation with forms in space and the potential for movement to inspire new sculptural possibilities. They are shown together with a selection of other panels and open frames for the first time, illustrating this important moment in Calder’s development.

The exhibition includes a selection of his most significant motorized mobiles. Black Frame, 1934, and A Universe, 1934, reveal the ways in which Calder made use of his training as an engineer and his fascination with the dynamism of the cosmos. By 1932, Calder’s suspended sculptures would begin to move without motors, animated by just the lightest of air currents. In Snow Flurry I, 1948, Calder demonstrates his masterful expertise in constructing large-scale mobiles whose equilibrium and reduced palette awards them their sublime quality.

Calder reinvented the possibilities of sculpture in parallel with avant-garde developments in theater and dance. He incorporated elements of choreography and sound to fundamentally change the principles of traditional sculpture, creating mobiles which chime and resonate such as Red Gongs, 1950, Streetcar, 1951, and Triple Gong, 1951. The exhibition closes with Calder’s large scale mobile Black Widow, circa 1948, shown for the first time ever outside Brazil, demonstrating how his art in motion turned global after World War II and came to serve as a visual metaphor for a new and free social order.