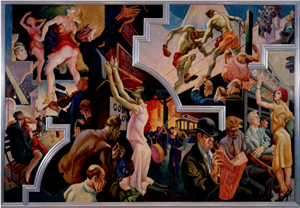 NEW YORK—American artist Thomas Hart Benton’s epic mural America Today—a sweeping panorama of American life, celebrating the promise of modern industry and technology and the accomplishments of working people in the boom years of the 1920s—has been donated by AXA Equitable Life Insurance Company to The Metropolitan Museum of Art. The announcement was made jointly yesterday by Thomas P. Campbell, the Museum’s Director and CEO, and Mark Pearson, AXA Equitable Chairman and CEO.

Benton (1889–1975) created the 10-panel mural cycle in 1930–31 as a commission for the third-floor boardroom of the New School for Social Research in New York City. Referring to sketches he made during his travels around the U.S. in the 1920s, Benton initially executed nine of the panels, which were first seen by the public when the International-style building designed by Joseph Urban at 66 West 12th Street opened on New Year’s Day, 1931; he completed the tenth panel later. The mural cycle filled the four walls of the 30-by-22-foot boardroom. Figures of farmers, coal miners, steelworkers, architects and builders, doctors and teachers surrounded viewers, representing a cross-section of American life. In 1986, American art scholar Lloyd Goodrich remarked that Benton “took the whole face of America and tried to make a work of art out of it….It was a new technique completely in mural painting, of actually taking reality and making mural art directly out of it.” Although Benton received no fee for the commission, America Today established him as his era’s leading American muralist. Its success provided the impetus for the Works Progress Administration (WPA) mural programs of the Great Depression.

In announcing the acquisition, Mr. Campbell stated: “This is a momentous gift to the Met and to New York City. AXA Equitable’s exceptional gift brings to the Museum both a great work of art and a significant cultural landmark, one that forged a new American idiom in the visual arts. It will certainly play a key role in our ideas about modern art at the Met.”

While discussing AXA Equitable’s decision to give Benton’s great painting to the Metropolitan Museum, Mr. Pearson noted: “America Today embodies the very spirit of America and its technological genius. Above all, the mural is a monumental tribute to the American worker, and as such, we felt it was the right moment to make a gift of it to the American people, in keeping with AXA Equitable’s commitment to preserve the masterwork’s legacy for future generations.”

Sheena Wagstaff, Chairman of Modern and Contemporary Art at the Metropolitan Museum, added: “This extraordinary gift greatly enriches the Museum’s narrative of 20th-century American art. It is a work of immense scale and significance, and represents a uniquely American brand of modernism that condenses the spirit of the Jazz Age, anticipates Regionalism, and holds a fascinating and deeply ambivalent relationship to avant-garde European movements as well as to the Mexican mural movement. In addition to presaging subsequent Abstract Expressionism and Pop Art, its full blown presentation of American culture includes remarkable allusions to industrialization, race relations, and social values.”

When America Today is installed at the Metropolitan Museum, its original spatial arrangement will be recreated so that the mural cycle can be viewed as Benton conceived it.

After more than 50 years at the New School for Social Research in a room used first as the boardroom and later as a classroom, America Today was not receiving the physical protection or public attention it deserved. In 1982, the school announced the sale of the mural cycle to the Manhattan art dealer Maurice Segoura, with the condition that it would not be re-sold outside the United States or as individual panels. But the work proved difficult to sell as a whole and the likelihood increased that the panels would be dispersed.

America Today was acquired by AXA Equitable (then Equitable Life) in 1984, after efforts on the part of then-Mayor Edward I. Koch and others to keep it intact and in New York City. Two years later, after extensive cleaning and restoration, America Today was unveiled to critical acclaim in AXA Equitable’s new headquarters at 787 Seventh Avenue. When the company moved its corporate headquarters again in 1996, to 1290 Avenue of the Americas, America Today was put on display in the lobby. There it remained until January 2012, when the company was asked to remove it to make way for a renovation. The removal triggered AXA Equitable’s decision to place the historic work in a museum collection. Curators Pari Stave, on behalf of AXA Equitable, and H. Barbara Weinberg, on behalf of the Met, were instrumental in moving the project forward.

“This is an example of a dynamic civic partnership between AXA Equitable and the Metropolitan Museum, both venerable institutions with connections to New York City that date back to the mid-19th century,” said Mayor Michael R. Bloomberg. “Thanks to AXA Equitable’s civic leadership, we’ll be able to preserve an important part of our collective cultural legacy. This act is an affirmation that private and public institutions can work together effectively to ensure New York City’s position as a world financial and cultural capital.”

Former Mayor Koch—whose administration’s efforts in the early 1980s to preserve the mural and keep it in New York City have now been made permanent through the gift to the Metropolitan Museum, and who in recent years has worked at 1290 Avenue of the Americas, where the mural has been on view in the lobby—added: “I have had the pleasure of years of exposure to Thomas Hart Benton’s mural—America Today—seeing and appreciating it every morning when entering my office building. Now millions visiting the Met will have that joy.”

America Today was Thomas Hart Benton’s first major mural commission and the most ambitious he ever executed in New York City. It remains his best-known work.

Not wishing to work in true fresco directly on the wall—as José Clemente Orozco elected to do for his concurrent commission in the New School’s public dining room and student lounge—Benton painted off-site on panels that were to be installed in the boardroom after they were completed. He availed himself of a loft that Alvin Johnson, the school’s director who had commissioned the mural cycle, obtained for his use on the twelfth floor of a nearby building; constructed wallboard panels reinforced by 1-x-3” pine cradling; glued onto the surfaces heavy linen and primed it with seven coats of gesso and two layers of Permalba (a commercial composite oil paint) to create a smooth, white, plaster-like surface; and applied an under painting of distemper (pigments mixed with water and a glue or casein binder) and a final coat of egg tempera (dry pigments mixed with egg and water), a venerable medium of the old masters with which he was eager to experiment. He then enriched the color in some of the darker areas with transparent glazes of oil paint. Finally he treated the murals with a coat of natural resin varnish and a thin layer of wax, producing an almost luminous, eggshell-like surface. Here and there, he attached to the murals straight and curved molding segments covered with aluminum leaf. These helped to organize the complex narratives and to separate the scenes. As Benton scholar Emily Braun noted: “Like a Gershwin tune, the murals evoke a jazzy rhythm syncopated visually by the jaunty silver bolts of the moldings.”

Informed visually by Benton’s characteristic stylized realism, America Today celebrates the development of new technology and of workers in all regions, from the farmers whom the artist knew as a native Midwesterner to steelworkers and construction crews engaged in building modern cities. Instruments of Power, the central and largest panel, faced the viewer entering the boardroom. Occupying the south wall, it extended almost from floor to ceiling and was bracketed by two windows that looked out onto the life of the city. Devoid of human presence, Instruments of Power announced Benton’s passion for the Machine Age by juxtaposing icons of modern industry and transportation, including a rushing train, an airplane, and a dirigible. These and other forms declare that industry and technology will thrust America into the future.

The other three walls of the room were also lined with large panels, but unlike Instruments of Power, these contained figures that crowded the viewer on all sides. The varying scale at which Benton portrayed these figures is typical of his style: some are life-size and loom over the viewer and each panel contains at least one immense, iconic figure. On the west wall were three panels (beginning closest to the door): Deep South, Midwest, and Changing West. These focused on the principal agricultural regions and the West, included vignettes of labor by prosperous and poor, white and black citizens, and underscored the evolution of farming methods from antiquated to modern. On the east wall were three panels (beginning closest to the door): City Building, Steel, and Coal. These distilled activities from the industrial East Coast and included some of the cycle’s strongest social commentary in figures such as an exhausted coal miner. On the north wall, flanking the door, were two panels depicting urban life: City Activities with Dance Hall and City Activities with Subway. Here the settings ranged from speakeasies to movie houses and sleazy dance halls to Wall Street and the dramatis personae—more numerous than in any of the other panels—ranged from boxers to strippers to Salvation Army singers. The tenth panel, an over-door, which was installed between the two urban scenes, was titled Outreaching Hands. “It wasn’t clear there was a Depression until I was almost finished,” Benton said later, “so I put that breadline over the door.”

Executed before the effects of the 1929 stock market crash and the seriousness of the Great Depression were fully understood, America Today is imbued with the spirit of the Roaring Twenties. This is apparent in the scenes’ kaleidoscopic variety, their surging, cinematic vitality, and the invitation they offer to read them in sequence, crosswise, or around and across the room. Benton scholar Henry Adams described the room as “an all-enveloping visual sensation… unlike anything achieved in American painting.”

A computer-generated model of the original interior of the boardroom at the New School for Social Research, showing the installation of the mural, and images of the ten individual panels, are available online at www.axa-equitable.com/axa/benton-mural.html and met.org/QUh9ZE.

Note: Key sources consulted for information on America Today include the following: 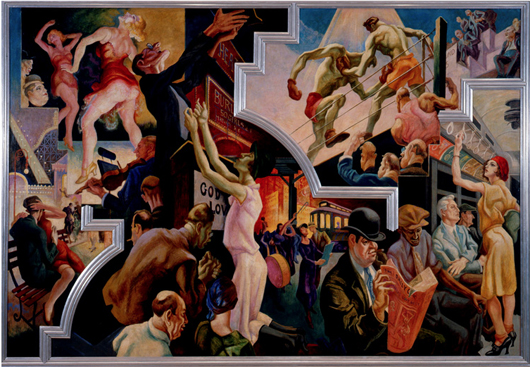