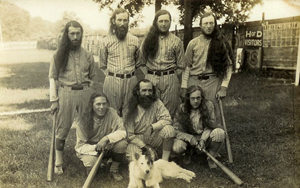 1928 photo of one of the greatest House of David baseball teams, with their canine mascot who traveled with them. Front, left to right: Mud Williams, Horrace Hannaford, George Anderson. Back: Dave Harrison, Percy Walker, Tom Dewhirst and Bob Dewhirst. Percy Walker signed a baseball bat along with Babe Ruth that year stating he was the only one who had ever struck out Ruth twice in one game. Image courtesy of House of David Museum.

ADDISON, Mich. (AP and ACNI) – After Chris Siriano used the ground floor of a more than 100-year-old building in Addison to house the New House of David Baseball Museum, he wanted to put the second floor of the building he’d bought to good use.

Then he and his wife, Christal, realized that there was a use for which the space would be perfect: a banquet facility.

The result is the Crystal Palace Banquet Hall, which opened July 1 and for which the Sirianos are currently taking bookings. The room has some 5,500 square feet of space and features cut-glass chandeliers, pocket doors, and original woodwork and tin ceiling tiles.

“It really lends itself to some great events,” Siriano said.

There’s also a kitchen — and the Sirianos can provide a caterer if desired — and a stage. When the building was constructed in 1906, the stage was used to present plays, Siriano said, and now “it’s perfect for a DJ or to put the head table on.”

But the most striking feature of the hall may just be how one gets to it. Rather than using the existing exterior stairways, Siriano had Amish carpenters who were among the workers renovating the building construct a grand split staircase that’s made to look like the one from the Titanic.

He didn’t have the Titanic in mind when he knew he wanted a beautiful staircase for the building, he said. But when he got online and started looking at pictures of grand staircases, he came across a shot from the famed luxury liner and “that’s the one that stuck in my head.”

So he showed the carpenters the photo and they went to work.

“They’re very talented and very artistic,” he said. “They might not have been sure it was feasible, but in the end, they did a phenomenal job, especially with not having any plans to work with, just a picture.”

The split design, he said, will make for “great wedding pictures.”

“You could split the bridal party up and have the bridesmaids on one side and the groomsmen on the other.”

Siriano said he’s excited about being a part of the Addison community. He comes from southwestern Michigan, where he was a real estate broker and local historian who operated the House of David Museum for 16 years there before moving it to Lenawee County. After he met Christal, who’s from Devils Lake, and the couple married, they decided to move to the Addison area and invest in the local community.

“I love the town,” he said. “We looked at different communities, and I think (Addison is) a safe town that looks like old-time America to me.”

And when it comes to the building itself, “it’s a beautiful spot and a peaceful location,” he said, and will fill a need in the area for a banquet hall.

Founded in 1903 and known the world over for their famous bearded baseball teams, the House of David was something America and the rest of the world had never seen the likes of before. These men traveled the country with their long hair and beards, heavy wool uniforms, and a truck full of laughter and talent. They went down in history for entertaining America with their uniqueness on the field, their absolutely superb playing ability, their own invention of the Pepper Game, and their ability to break the color barrier as they travelled many years with the Negro League teams.

The very first teams were comprised exclusively of members of the famous House of David religious colony, who lived a communal life based on Christianity, vegetarianism, celibacy and love for mankind. But they had to find something to do with a lot of extra energy, so they set out to play the game of baseball. Starting in 1914, they began to take on outside teams and soon found out that they were better than most that they encountered, so they went outside even the local teams, playing the best talents of the state of Michigan, and then eventually by 1917, talented teams around the country. They continued their winning ways, and began to be invited to play better and better teams across America, until they were actually playing semi-pro and pro teams everywhere. They actually beat over 70% of the teams they played, year after year, and were invited to play so many teams around the country, (even into Mexico and Canada), that they had to soon build up a second, third, fourth and even fifth travelling team to fill in all of the demand.

So it goes that by the early 1930s, there were House of David teams scattered around the country, taking on anyone and everyone who wanted to play, beating most, and leaving the stadiums full of laughter and amazement everywhere they stopped. Almost anyone who remembered the House of David teams and who was interviewed by the House of David Museum’s director, Chris Siriano, said it was the most amazing group of baseball players they had ever seen, and certainly the most unique.

To learn more about the House of David and to view additional archival images, log on to www.houseofdavidmuseum.org. 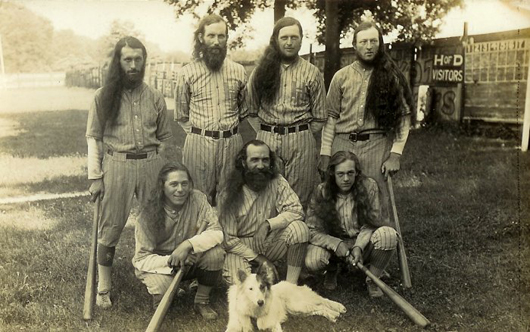 1928 photo of one of the greatest House of David baseball teams, with their canine mascot who traveled with them. Front, left to right: Mud Williams, Horrace Hannaford, George Anderson. Back: Dave Harrison, Percy Walker, Tom Dewhirst and Bob Dewhirst. Percy Walker signed a baseball bat along with Babe Ruth that year stating he was the only one who had ever struck out Ruth twice in one game. Image courtesy of House of David Museum. 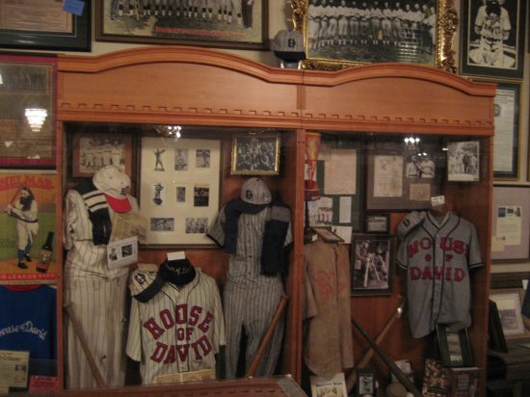 The museum is filled with historical memorabilia, including team uniforms, framed photos and other ephemera. Image courtesy of House of David Museum. 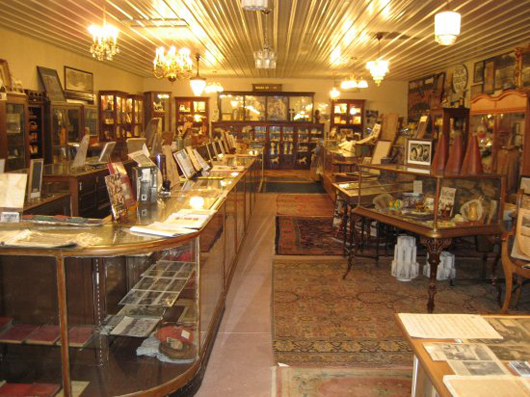 The main room of the museum. Image courtesy of House of David Museum.

As they barnstormed across the continent, the House of David baseball team picked up players like Satchel Paige of the Negro Leagues’ Kansas City Monarchs (above); Grover Cleveland Alexander, and even Babe Ruth for a short stint. Fans loved the players and their famous ‘Pepper Game,’ which was said to be worth the price of admission just to see the longhaired athletes clowning around and hiding the ball under their beards. For many years they won over 100 games in a season, and in 1929 they won 110 out of 165 games. Image courtesy of House of David Museum.