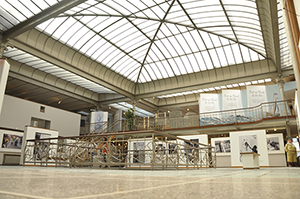 The Belgian Comic Strip Center in Brussels. This file is licensed under the Creative Commons Attribution-ShareAlike 3.0 Unported license.

BRUSSELS (AFP) – Comics are serious business in the land of Tintin and The Smurfs, and nowhere more so than in Europe’s biggest and oldest museum dedicated to the art form as the venue celebrates its 25th birthday.

Enter the Belgium Comic Strip Center and you pass a giant model of the red and white moon rocket used by the ginger-quiffed boy detective, along with other life-size replicas from other famed comics.

Located in a stunning Art Nouveau warehouse in central Brussels, it’s clear that here comics, graphic novels, bandes desinees, call them what you will, are more high art than popular culture.

But if anything, the challenge for the museum over the past quarter century is to make sure that things don’t get too serious, and that the element of wonder that has drawn children to Tintin, Snowy and friends is not lost.

“In 2014 we’re trying to support what comics have become. We don’t want to get tied up in the idea that a museum has to be an art gallery,” museum director Jean Auquier said at an event to mark the 25th anniversary.

A party to celebrate the big day drew a huge crowd of well-heeled members of Brussels high society, including a few surviving contemporaries of Tintin’s legendary creator, Herge, who died in 1983.

Beneath the glass ceiling of the former textile warehouse, designed by Art Nouveau master Victor Horta, they sipped champagne and looked at exhibitions marking the impact of comics on Belgian society, while the sounds of a live jazz band echoed off the high ceiling.

Comics as a national symbol

But the museum is a major draw for tourists too—for many of whom comic strips are as much of a national symbol of Belgium as beer or chocolate—and is the country’s seventh most visited monument.

It attracts 200,000 visitors a year, more than double the number who visit a new, dedicated Tintin museum in the leafy new university town of Louvain-la-Neuve, some 20 kilometres (12 miles) outside Brussels.

Most come from France (40 percent), Belgium (17.5 percent), Germany (5 percent) and Spain (4 percent)—but 3 percent of them come from as far afield as China.

The museum is designed for all ages too, with a new section dedicated to the artist Pierre Culliford, who under the pen name Peyo created the Smurfs in the late 1950s. It features a giant mushroom of the kind that makes the home for the small blue creatures.

In the comics library, visitors can read their favorite strips all day long for 50 euro cents (62 US cents).

The top floor—overlooking the hall which is dominated by a huge model of the red bellboy’s cap worn by Belgian comic favorite Spirou—is given over to temporary exhibitions. For the 25th anniversary the main show features original illustrations featuring different Brussels sights such as the Atomium, the huge atom-shaped metal structure built for the 1958 World Fair.

The exhibition also features work by the comic designer and screenwriter Jean-Claude Servais, who is better known for his fantasy works capturing the mystery of the forest but who set himself the task of drawing the historic heart of Brussels.

Neither was encapsulating 25 years of comic history, officials at the museum say. In 1989 only 500 books were published in French every year, in a world where computer art was almost nonexistent and Japanese manga was still little known in Europe.

But today 5,000 are published a year in Belgium, with manga styles representing 20 percent of those on sale, and a growing focus on more adult-themed graphic novels, or on luxury editions. Computer and technology-driven graphics are meanwhile increasingly common, replacing the hand drawn art of the golden era.

The museum welcomes it all, says Auquier, the museum director.

“Many visitors don’t pretend to like the fantasy stuff, the graphic novels, the autobiographical stuff. They’re just here with their memories of Lucky Luke,” he said, referring to a classic French comic about a cowboy.

“And they will learn, here, that there is more to the world of comics.” 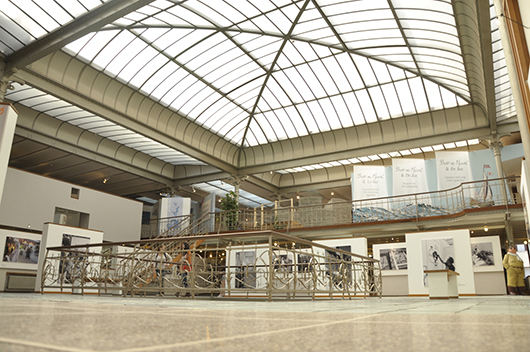 The Belgian Comic Strip Center in Brussels. This file is licensed under the Creative Commons Attribution-ShareAlike 3.0 Unported license.