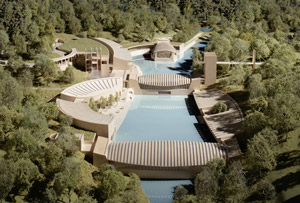 BENTONVILLE, Ark. (AP) – The director of the Crystal Bridges Museum of American Art won’t be sticking around for the $50 million museum’s opening.

Bob Workman announced his resignation Jan. 26, saying the workload involved in getting the museum ready for its opening next year was too much.

“If this is all I can think and breathe and do for the next five to seven years, I just don’t see that in my future,” Workman told the Arkansas Democrat-Gazette.

Workman has pursued numerous works for the museum’s collection, but the checkbook of patron Alice Walton has not been enough to land some of those he sought and that led to some protracted battles with painting owners.

Thomas Jefferson University in Philadelphia fought off an attempt by Crystal Bridges to acquire The Gross Clinic by Thomas Eakins, raising $68 million to keep the masterpiece. Crystal Bridges settled for another Eakins painting, Portrait of Professor Benjamin H. Rand, bought for an undisclosed price.

The museum also wanted to display works by Georgia O’Keeffe that are in storage at Fisk University in Nashville, Tenn., but the effort got bogged down in a court battle.

Workman has been director since 2006 and is to stay on the job through the end of the year to assist in the transition. The museum is conducting a national search for a new director.

Workman said he was grateful to work on the project.

“I’ve been given an opportunity to do something truly unique,” said Workman, who was first a consultant for the museum, starting in 2003. “We’re building a world-class building I wouldn’t have guessed five years ago, a phenomenal collection and great programming.”

He said he does not have another job lined up.

Walton, daughter of Wal-Mart Stores Inc. founder Sam Walton, is president and chairwoman of the Crystal Bridges Board of Directors, and is the main financial backer for the museum, which is being built near downtown Bentonville.

“He has done a magnificent job and will be leaving a beautiful legacy. Crystal Bridges wouldn’t be what it is without Bob,” Walton said.

The museum will be in the center of a wooded campus, with trails that offer views of the museum building.

Workman will be less involved in the day-to-day operations, and he will tend to other areas such as exhibitions and the building of the museum’s library. Workman’s wife, Liz Workman, is coordinator of collections and exhibition services, though she plans to step down in April.

The museum will house a permanent collection of masterworks from American artists along with galleries dedicated to Native American and regional art and artists. The collection being assembled includes pieces from the Colonial period through the modern era.