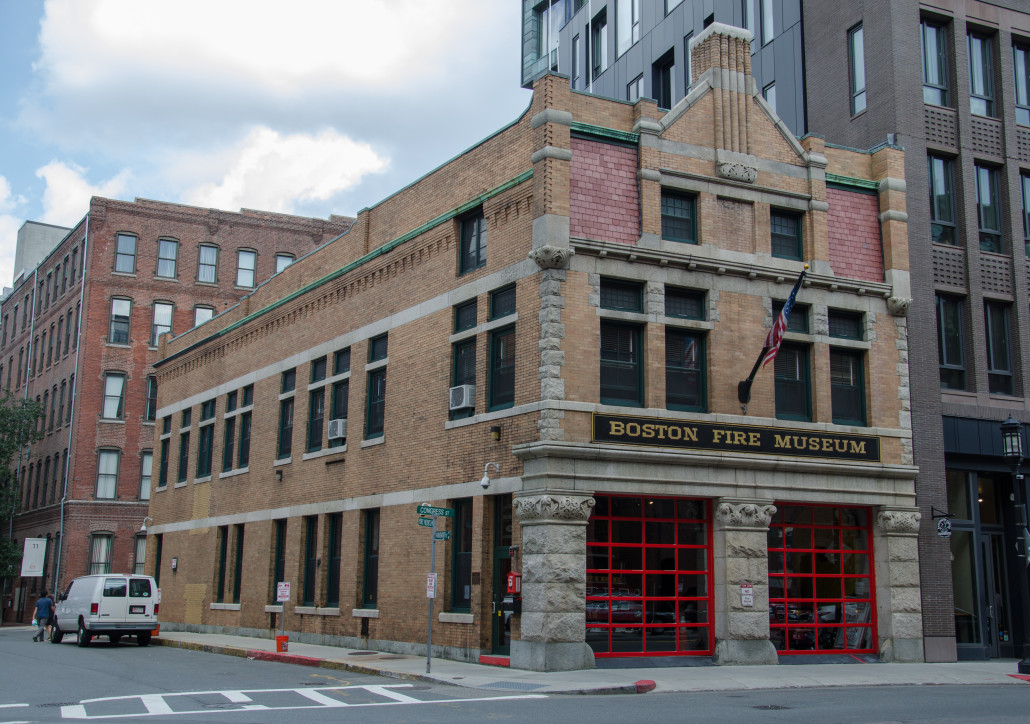 BOSTON (AP) – It’s a mild fall Saturday morning and the overhead door to the Boston Fire Museum on Congress Street is up. Jim Daly, a museum volunteer, stands at the entrance to the landmark building, behind him a gleaming red fire engine. A family out for a stroll stops and takes a few tentative steps toward the fire engine.

“Come on in,” Daly says. “It’s free.” He hands the young children plastic fire helmets, red for the boy, pink for his sister. These souvenirs are free too. The mother says that the family recently relocated from North Carolina and they’re exploring Boston.

The museum is surrounded by 19th-century buildings erected by the Boston Wharf Co. to store wool during the city’s textile trade boom. To protect their precious inventory, the company converted wharves into masonry warehouses and commissioned city architect Harrison H. Atwood to design the red brick and granite firehouse. Completed in 1891, it was the only fire station in Boston to have two engines under one chief. When one engine answered an alarm, the other remained behind to protect the wool warehouses.

These days, the warehouses are fashionable apartments, trendy restaurants, and art galleries. The fire station, which closed in 1977, is a museum, owned and operated since 1983 by the all-volunteer Boston Sparks Association. The fire buffs not only preserve Boston’s firefighting history, but also dispense such refreshments as cold drinks and fresh towels to firemen at a blaze. In 1678, Boston became the first city to pay firemen.

Boston Pops conductor Arthur Fiedler was a famous spark. The maestro collected a museum’s worth of memorabilia, including badges and photographs of himself aboard fire engines. His collection of more than a hundred helmets, gifts from fire departments throughout the country, is mounted on the museum ceiling.

The children’s father is interested in history and the 1792 hand tub in the center of the museum. A metalsmith, inventor, and Son of Liberty, Paul Revere was also Boston fire warden in 1775. He designed the hand tub on wheels to improve the efficiency of the bucket brigade by bringing water closer to a fire. The hand tub on display was built by apprentice Ephraim Thayer.

Fire warden was an honor also accorded to Sam Adams and John Hancock. Hancock, a wealthy merchant, donated the money for a hand-pump engine.

A city of wood buildings, Colonial Boston suffered many “great fires.” The first, in 1760, destroyed 349 buildings on State and Washington streets along with the colony’s first meetinghouse. Later, fire destroyed Faneuil Hall. The Faneuil Hall we know is the replacement.

Daly, a retired electronic engineer, is from a family of Lowell firefighters, and proudly shares fire history. “The first fire alarm box was invented in Boston in 1852,” he says and pulls the lever. Bells clang. Counting the rings tells a fire station the alarm’s location.

He points to a vintage fire engine that worked the 1919 Molasses Flood, when sticky waves of molasses as high as 15 feet roared through city streets. But the children find the high seat and big headlights on a newer model irresistible. With an assist from their dad, they clamber aboard. From this vantage point, they can survey the entire one-room museum: historic photographs, posters, the fireman statue carved by Donald Kerr of Chatham, European helmets collected by a Salem fire chief, and lots of well-used apparatus.

By SHIRLEY MOSKOW
The Boston Globe

Information from: The Boston Globe, http://www.bostonglobe.com