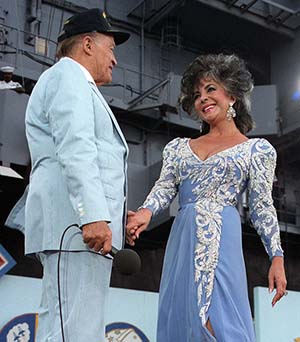 Elizabeth Taylor with Bob Hope at a USO show in 1986. Image courtesy of Wikimedia Commons.

The movie star collected hundreds of fabulous jewels in her lifetime, but few as grand as the Bulgari pieces from Burton, including a platinum-and-diamond necklace centered around a 65-carat Burmese cabochon sapphire, a present for her 40th birthday. It sold at auction in 2011 for $5.2 million.

The necklace is one of 150 one-of-a-kind creations from the Bulgari Heritage collection now on display at the Houston Museum of Natural Science in “Bulgari: 130 Years of Masterpieces.” A section of the exhibit is devoted to Taylor’s famous pieces from the Italian jeweler.

Houstonians Lynn Wyatt and Joanne King Herring loaned their own notable necklaces for the occasion.

Herring, a longtime political donor and activist, was given the jagged and dramatic diamond sautoir necklace by her then-husband, Houston developer Robert King.

“They had it in the window at the Pierre, and every time we went to New York I’d see it and yearn for it,” she told the Houston Chronicle.” When he offered it to me, he said, ‘You can have this or the state of Rhode Island.’”

Herring said she has worn her Bulgari necklace at the White House many times, as well as with the kings of Norway and Belgium, the president of Pakistan, the queen of Saudi Arabia, and Prince Charles and the late Princess Diana.

Wyatt’s necklace, made in 1975, was a gift from her husband, Oscar, and features a heart covered in alternating diamonds and blue lapis lazuli, with a giant yellow sapphire in the center.

“The necklace is the kind of thing one could wear with a ballgown or with jeans,” Wyatt said. “Houstonians appreciate anything that is beautiful and chic at the same time, and I think Bulgari encompasses both of those qualities.”

The exhibit is a blend of art, design and nature, museum president Joel Bartsch said.

“Diamonds, rubies and other gems are all natural products of the Earth. We have a fantastic collection of minerals when they come out of the ground, so this represents the other end of the spectrum,” Bartsch said. “It’s about the quality of gems, the taste in design and the science and technology of executing those designs masterfully.”

Greek silversmith Sotirio Bulgari (formerly Voulgaris) opened his first shop in Rome in 1884. By the 1920s, Bulgari was known for chunkier jewelry, rejecting the lightness of the Parisian school dominant in that era. When Italian design and “la dolce vita” swept the world in the 1950s, the firm’s innovative designs transformed the way jewelry was made and worn in the 20th century.

Using gemstones like emeralds, rubies and sapphires, Bulgari displayed a daring sense of color in his designs and was one of the first to use gems based on their aesthetic value rather than their intrinsic worth. Bulgari also rediscovered the ancient Roman cabochon cut, rounding off and polishing gemstones rather than cutting them into facets.

The emergence of Rome as a cinema powerhouse in the 1950s intimately connected the jeweler with the glamour of the film industry. Stars like Taylor, Gina Lollobrigida, Claudia Cardinale, Kirk Douglas, Anna Magnani, Peter Sellers and Audrey Hepburn were known to stop by the Via Condotti shop.

A red-carpet staple for decades, Bulgari jewelry made its way to the silver screen as well. Taylor wore her own Bulgari jewels in three films; Ingrid Bergman, Sophia Loren and Anita Ekberg all wore the brand onscreen.

“We focused this exhibition on glamour,” said Alberto Festa, president of Bulgari USA. “Bulgari sold and gave many pieces to stars, especially during La Dolce Vita, so we have the Elizabeth Taylor collection and other pieces that have been worn by Italian and international celebrities, as well as pieces that have been worn at the Oscars, where Bulgari has always been present on the red carpet.”

The celebrity portion of the show pairs stunning jewels with photos of stars from yesterday and today wearing them, including Meryl Streep, Jessica Chastain and Jennifer Aniston. Elizabeth Taylor’s section includes a ring that matches the show-stopping sapphire necklace and a hand mirror from the set of Cleopatra.

“We tried to replicate the love story between Elizabeth Taylor and Richard Burton, to have the feeling of being there in the 1960s when they were filming in Rome,” Festa said.

There’s also a diamond brooch given by Taylor’s fourth husband, Eddie Fisher (who sent her the bill when she left him soon after for Burton), and a gold necklace dotted with Byzantine coins that she wore in 1976 to announce her engagement to Sen. John Warner. Different styles, different suitors, but always Bulgari.

The exhibit at the Museum of Natural Science is the largest collection to date and the first show in the United States to include items from all of Bulgari’s 130-year history. The range includes a silver bracelet and necklace set made by Sotirio Bulgari between 1887 and 1890, art deco-influenced necklaces and brooches in platinum and diamonds from the 1930s and the geometric collars of the 1980s and later.

Bulgari’s penchant for taking inspiration from ancient Rome is represented by several pieces in the Monete style of the 1970s, which integrated ancient Roman coins into necklaces of gold and diamonds.

Four bracelet watches from the Serpenti collection in the 1960s update the age-old snake motif by adding a watch face inside the snake’s mouth. Also in the exhibit is a reproduction of a one-of-a-kind Serpenti belt owned by Vogue editor Diana Vreeland. 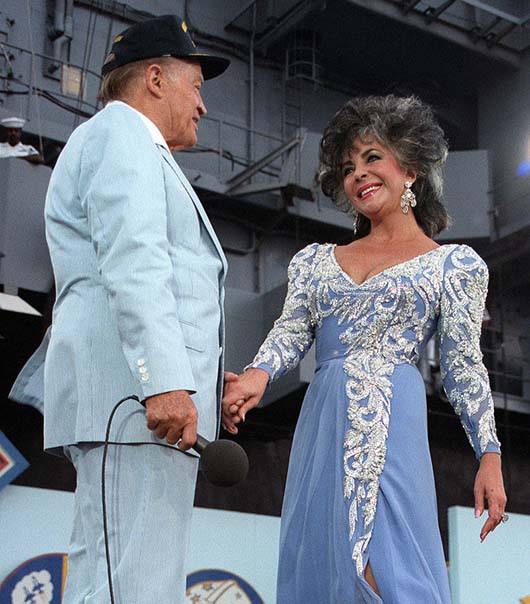 Elizabeth Taylor with Bob Hope at a USO show in 1986. Image courtesy of Wikimedia Commons.