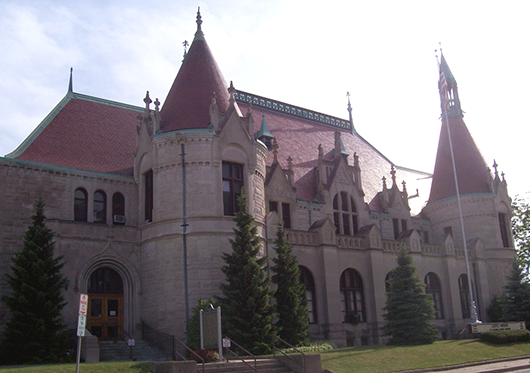 The once-soggy contents of a copper box that spent a century inside a rock in Saginaw’s Bliss Park are dry and on display in the Castle Museum of Saginaw County History’s latest exhibit, “Home from the War: Saginaw’s Civil War Veterans.”

The latest exhibit commemorates the 150th anniversary of the end of the Civil War. It displays books, lithographs, hand-carved wooden soldiers and the drum that Chesaning soldiers marched out of the village hearing, among other historic treasures at Saginaw’s post office-turned-history-repository in downtown Saginaw. It remains on display through April 29.

At the time of the Civil War, Saginaw was still a city divided – East Saginaw on the east side of the Saginaw River, Saginaw City on the west side. The state forced the two communities to become one in 1889.

In total from Saginaw County, 2,039 soldiers enlisted to fight in the Union Army. In Michigan as a whole, 1 in 6 soldiers would die – about as many from disease as from actual fighting.

Encased in glass, side-by-side large bird’s-eye view lithographs – hand-drawn, dimensional maps – show the streets and buildings of each community during Civil War times. Rapidly the population was expanding amid the lumber boom.

“Saginaw is just starting to develop. Saginaw would become the third largest population in the state,” Trombley said.

“For some of the soldiers who left from Saginaw, one of the things that would be shocking is how the city grew.”

Tour the Castle’s Civil War memorabilia, pulled from its own extensive collection as well as items on loan from local history and genealogy collection at the Public Libraries of Saginaw, as softly piped in Civil War tunes fill the air. You’ll see ribbons and celluloid pins from the Women’s Relief Corps and the Grand Army of the Republic – the nation’s first veterans organization, and one that by its very nature became a memory when its last Union soldiers died of old age.

A sample of the 800 miniatures hand-carved by John Revard of Saginaw is on display, soldiers and cavalry lined up and ready for a battle.

For Buena Vista Township Gary D. Dietrich, the exhibit allowed a glimpse into the life of his great-great-grandfather, Pvt. Christian Hartner. Swiping through a virtual Grand Army of the Republic roster on display for anyone to read, he read his ancestor’s name as it was printed in 1890.

“It was awesome. I didn’t expect to find his name anywhere in there,” said Dietrich, 61 and a retired Buena Vista firefighter. “He was just a private in the 29th Infantry, Company D. I just found this out about him being in the Civil War in the last couple years, doing my family tree.”

Dietrich is a member of American Legion Post 229 in Frankentrost and puts American flags on the graves of 1,500 veterans each Memorial Day, including that of Frederick VanFleet in Blumfield Township Cemetery. He discovered that VanFleet was a lieutenant for Company D, serving with his great-great-grandfather. VanFleet was killed in Shelbyville Pike during the Battle of Nashville in 1864.

The time capsule that officials opened to much fanfare in the packed Morley Room in November was installed in 1914 by leading citizens and survivors of the 29th Regiment from East Saginaw.

Servpro of Saginaw and DFD Document Restoration Services of Livonia freeze-dried the time capsule’s contents for the Castle at no charge.

The drumhead that reports of the day said was inside the time capsule was not found, though it could have fallen apart or still be concealed in the pages of a volume that preservationists are loathe to rifle.

“If you’re into Saginaw or the Civil War, it makes that connection to both,” Trombley said of the exhibit.

Information from: The Saginaw News, http://www.mlive.com/saginaw