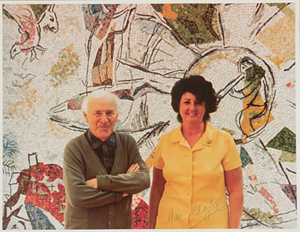 MOSCOW (AFP) — Once banned as “bourgeois,” the work of painter Marc Chagall is enjoying a revival in the ex-Soviet Union with a new exhibition delving into the influence folk art and his Russian Jewish roots had on his work.

“Visitors often ask, why Chagall’s animals are blue, yellow or pink, why the bride is flying over the rooftops and the man has two faces. They will now understand where Chagall drew (his images) from,” said curator Ekaterina Selezneva.

To emphasize the importance of these influences, the exhibition at Moscow’s Tretyakov Gallery features a popular Russian engraving on wood, a carpet and icon as well as a Jewish spice-cake mold and seven-branched menorah chandelier.

Born Moishe Segal in 1887 to a poor Jewish family outside Vitebsk in modern Belarus, Chagall never forgot his life in the Jewish pale—the area to which Catherine II confined the Jews of her empire in the 18th century—and recalls images of Vitebsk in each painting.

When the 1917 Russian Revolution abolished anti-Semitic laws, Chagall was appointed Fine Arts Commissioner in Vitebsk, but a conflict with the fellow painter and colleague Kazimir Malevich led to his resignation in 1920.

Chagall left Vitebsk and within two years emigrated to France.

The exhibition, which runs until Sept. 30, “must help people to understand the mystery of Chagall,” who always looked to popular art in his search for a distinctive figurative language, said Selezneva.

Also on display are little-known drawings, watercolors and gouaches by Chagall as well as sketches of Vitebsk, Paris collages and famous illustrations of the Bible and Lafontaine’s fables.

Some of the exhibits—borrowed by the organizers from the Saint Petersburg Ethnographic Museum and Moscow’s Museum of Jewish History—reveal the prototypes of Chagall’s imagery.

The brightly colored muzzles on a carpet woven in early 20th century Moscow are reminiscent of the animal faces portrayed by Chagall, who once described himself as “a tree bound to the earth by its roots.”

A man depicted in 1896 by an unknown artist, in the traditional Russian engraving technique known as lubok, also hovers above the roofs of a town. This image was to become one of Chagall’s favorite characters some 15 years later.

Although Chagall found fame in France, where he died in 1985, his imaginative work continued to be frowned upon in the USSR.

A reappraisal of his work, however, began two years after his death amid Soviet leader Mikhail Gorbachev’s perestroika reforms and in 1987 thousands queued at Moscow’s Fine Arts Museum for the first major exhibition of his paintings.

And in 2005, around 128,000 people visited a three-month-long Chagall exhibition entitled “Hello Motherland!”

“His characters are flying around the Earth, but return to their place of origin,” said Selezneva. 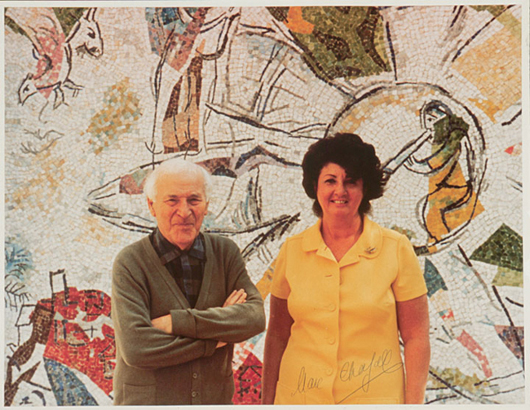 Guggenheim Museum to show less-colorful side of Picasso

50 years on, everything Marilyn Monroe is in high demand
Scroll to top