“When China’s last emperor, Puyi, left the Forbidden City in 1924, the doors closed on a secluded compound of pavilions and gardens deep within the palace. Filled with exquisite objects personally commissioned by the Qianlong emperor, the complex of lavish buildings and thoughtful landscaping lay dormant for decades.”

– From Juanqinzhai in the Qianlong Garden, The Forbidden City, Beijing

NEW YORK – A special exhibition featuring 90 exquisite objects that once adorned an exclusive compound in the Forbidden City will go on view at the Metropolitan Museum of Art beginning Feb. 1.

Showcasing sumptuous murals, furniture, architectural elements, Buddhist icons, and decorative arts—almost all of which have never before been seen publicly— The Emperor’s Private Paradise: Treasures from the Forbidden City will present works of art that demonstrate the highest levels of artistic accomplishment in 18th-century China. Highlights of the exhibition will include an imposing portrait of the Qianlong Emperor, a radiant silk panel depicting a Buddhist shrine, magnificent thrones executed with impeccable craftsmanship, and a monumental jade-and-lacquer screen consisting of 16 panels.

Augmenting the objects will be photo murals of the Qianlong Garden as well as a video-simulated “walk-through” of the Studio of Exhaustion from Diligent Service (Juanqinzhai), the first building to be fully restored there.

The exhibition was organized by the Peabody Essex Museum in partnership with the Palace Museum and in cooperation with World Monuments Fund and has been made possible through generous support from the Mandarin Oriental Hotel Group and American Express. Additional support was provided by the E. Rhodes and Leona B. Carpenter Foundation, The Freeman Foundation, the National Endowment for the Arts, and ECHO (Education through Cultural & Historical Organizations).

The Qianlong emperor (pronounced “chien-lung”) was the fourth monarch of the Qing dynasty (1644-1911) who reigned from 1736 to 1795. Built between 1771 and 1776, the Qianlong Garden was for the emperor’s intended retirement and no expense was spared, as the finest artisans used the highest quality materials to create intricately embellished interior and exterior spaces. But the emperor never retired and the garden—relatively untouched since imperial times—remains a virtual time capsule of 18th-century taste at its most extravagant.

Through the richly varied works on view, the exhibition conveys his desire both to integrate art, culture and nature, and to magnify his achievements as a connoisseur, scholar and devout Buddhist. In contrast to preceding Qing emperors, who had emphasized simple interiors in keeping with their nomadic Manchu heritage, the interiors of the Qianlong’s retirement residence were lavish and ornate in the extreme. For the Qianlong Emperor, the garden was a metaphor for his well-ordered realm. The Manchu ruler’s ambition to unify “all under heaven” is evident in his effort to make the garden a microcosm of his empire, integrating various cultural influences within the confines of his palace walls.

Installed in the Metropolitan’s Galleries for Chinese Painting and Calligraphy, which surround a Ming-style garden court and a hall with outstanding examples of Chinese hardwood furniture, the exhibition will lead viewers through a series of thematic galleries, much as the actual garden was intended to lead visitors through a series of courtyards. These courtyards contained evocatively named halls and pavilions devoted to discrete themes, such as theatrical performances and trompe l’oeil illusions, Buddhist worship or meditation, the “three friends” of wintry weather (pine, plum and bamboo), and exotic foreign environments and furnishings. Nearly every space featured a throne—each different in its design and materials—as demonstrated through the several examples in the exhibition.

In conjunction with the exhibition, a variety of educational programs will be offered, including an all-day, Museum-wide celebration of Chinese Lunar New Year on Feb. 5, and a Sunday at the Met lecture program on Feb. 6, a subscription event with Amy Tan, films about the Forbidden City, and gallery talks.

Complementing The Emperor’s Private Paradise will be two installations drawn from the Metropolitan’s holdings of Qing court art. Extravagant Display: Chinese Art in the 18th and 19th Centuries—a rich selection of theatrical costumes, lacquers, ivories, jades, porcelains, metalwork, and other media largely created for use within the imperial precincts—will be presented in the Florence and Herbert Irving Galleries for Chinese Decorative Arts (through May 1). Also, imperially commissioned paintings and calligraphies from the Qianlong era will be on display in an installation in The Frances Young Tang Gallery.

After its showing at the Metropolitan, The Emperor’s Private Paradise: Treasures from the Forbidden City will travel to Milwaukee Art Museum (June 11-Sept. 11). 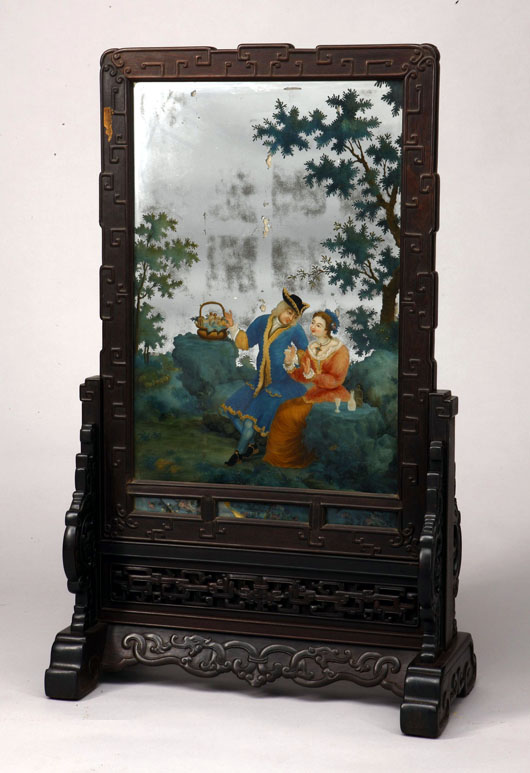 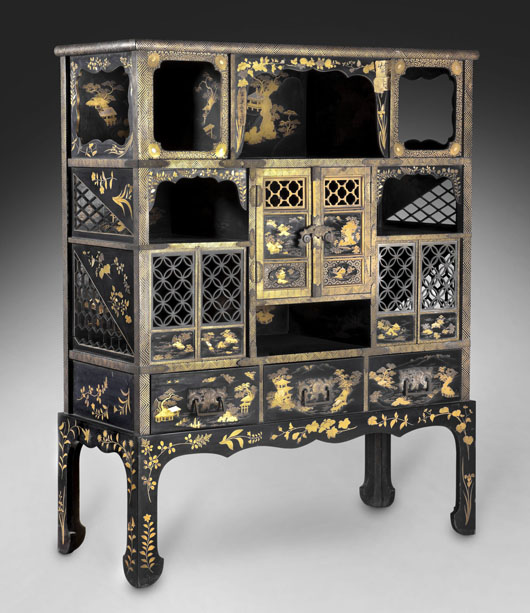 One of a pair of cabinets, from Yucuixuan, wood, lacquer and gilding. Image courtesy of the Metropolitan Museum of Art and the Palace Museum, Beijing. 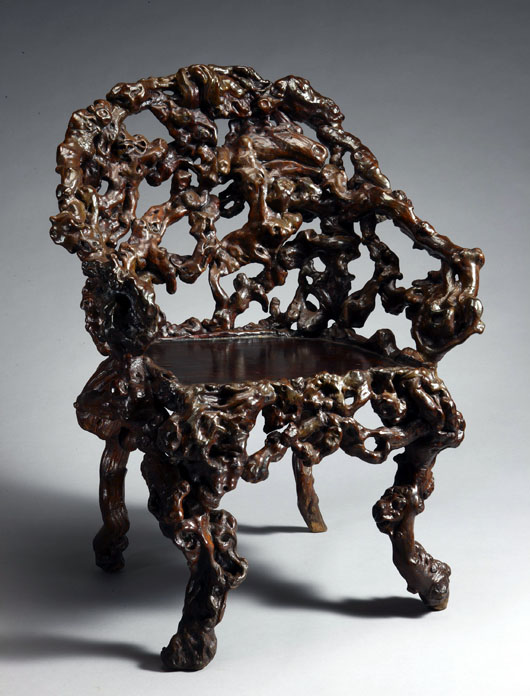 Chair, from Xishangting, rootwood. Image courtesy of the Metropolitan Museum of Art and the Palace Museum, Beijing. 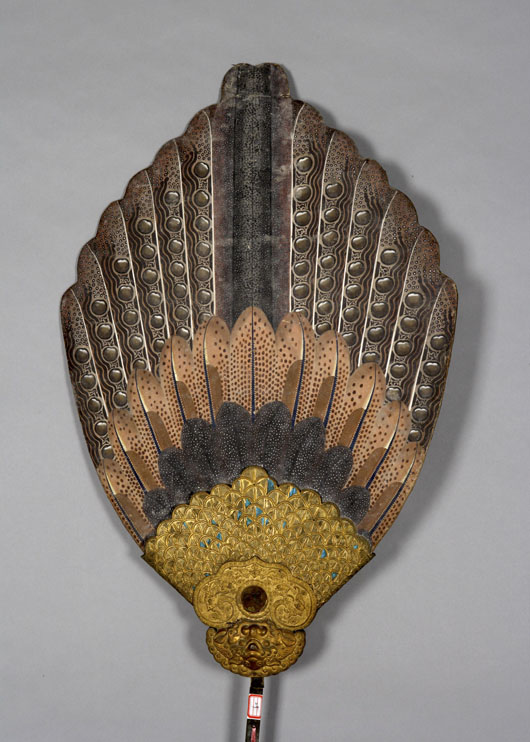 One of a pair of court fans, from Yanghe Jingshe, wood, brass, and paint, 38 3/4 inches x 25 1/4 inches; pole 70 inches long. Image courtesy of the Metropolitan Museum of Art and the Palace Museum, Beijing. 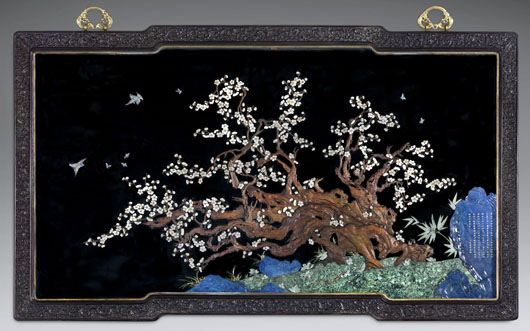 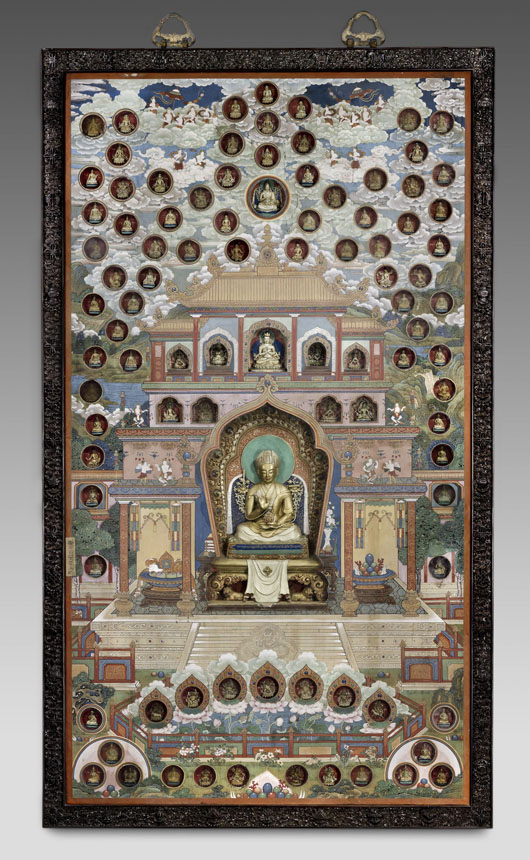 Panel with niches, from Cuishanglou, zitan, painted and gilt clay and colors on silk. Image courtesy of the Metropolitan Museum of Art and the Palace Museum, Beijing.

Ancient statues devastated in bombing on exhibit in Berlin