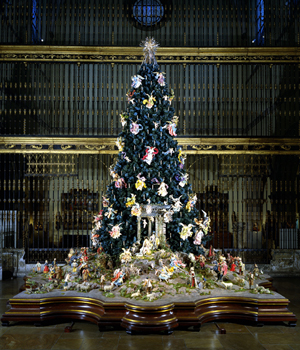 Annual Christmas Tree and Neapolitan Baroque Crèche display, 20 ft. blue spruce with a collection of 18th-century Neapolitan angels and cherubs among its boughs and groups of realistic crèche figures flanking the Nativity scene at its base, displayed in the Museum’s Medieval Sculpture Hall, Gift of Loretta Hines Howard, 1964

NEW YORK – The Christmas tree and Neapolitan Baroque crèche at The Metropolitan Museum of Art, a long-standing yuletide tradition in New York, is now on view for the holiday season through Jan. 8, 2012. The brightly lit, 20-foot blue spruce—with a collection of 18th-century Neapolitan angels and cherubs hovering among its boughs and groups of realistic crèche figures flanking the Nativity scene at its base—once again delights holiday visitors in the Museum’s Medieval Sculpture Hall. Set in front of the 18th-century Spanish choir screen from the Cathedral of Valladolid, with recorded Christmas music in the background and daily lighting ceremonies, the installation reflects the spirit of the holiday season.

This exhibit of the crèche is made possible by gifts to The Christmas Tree Fund and the Loretta Hines Howard Fund.

The annual Christmas display has evolved through the generosity, enthusiasm, and dedication of the late Loretta Hines Howard, who began collecting crèche figures in 1925. Soon after, Mrs. Howard conceived the idea of presenting the elaborate Nativity scene within a Christmas tree, angels swirling upward to the crowning star.

This unusual combination was first presented to the public in 1957, with the Metropolitan’s first exhibition of Mrs. Howard’s collection. Since 1964, more than two hundred 18th-century Neapolitan crèche figures have been given to the Museum by Loretta Hines Howard, and they have been displayed each holiday season for more than 40 years. Linn Howard, Mrs. Howard’s daughter, worked with her mother for many years on the annual installation. Following her mother’s death in 1982, she has continued to create new settings for the figures she adds to the collection. Andrea Selby, Linn Howard’s daughter, follows the tradition passed down by her mother and grandmother and joins in the creation of the display each year.

The towering tree is adorned with cherubs and some 50 gracefully suspended angels. The landscape at the base displays the figures and scenery of the Neapolitan Christmas crib. This display mingles three basic elements that are traditional to 18th-century Naples: the Nativity, with adoring shepherds and their flocks; the procession of the three Magi and their exotically dressed retinue of Asians and Africans; and, most distinctively, a crowd of colorful townspeople and peasants representing lifelike characters with intriguing facial expressions. The theatrical scene is enhanced by a charming assortment of animals—sheep, goats, horses, a camel, and an elephant—and by background pieces that create a dramatic setting for the Nativity, including the ruins of a Roman temple, several quaint houses, and a typical Italian fountain with a lion’s-mask waterspout.

The popular Christmas custom of restaging the Nativity is traditionally credited to Saint Francis of Assisi. The employment of man-made figures to reenact the hallowed events reached its height of complexity and artistic excellence in 18th-century Naples, where local families, often assisted by professional stage directors, vied to outdo each other in presenting elaborate and theatrical crèche displays. The high artistic estimation of the genre is evidenced in works of the finest sculptors of the period—including Giuseppe Sammartino and his pupils Salvatore di Franco, Giuseppe Gori, and Angelo Viva—who were called on to model the terracotta heads and shoulders of the extraordinary crèche figures. The Howard collection includes numerous works attributed to these as well as to other prominent artists.

The Museum’s crèche figures, works of art unto themselves, range from 6 to 20 inches in height. They have articulated bodies of tow and wire, heads and shoulders modeled in terracotta and polychromed to perfection. The luxurious and colorful costumes, many of which are original, were often sewn by women of the collecting families and their ladies and enriched with jewels, embroideries, and elaborate accessories, including precious metals in the form of gilded censers, scimitars and daggers, and silver filigree baskets. The placement of the approximately 50 large angels on the Christmas tree and the composition of the crèche figures and landscape vary slightly from year to year as new figures are added to the collection.

Visitors can listen to several audio messages as part of the Museum’s Audio Guide Program. Audio guides are available for rental ($7, $6 for Members, $5 for children under 12).

The Audio Guide is sponsored by Bloomberg.

As part of the Christmas celebration, several concerts—performed by Anonymous 4, Voices of Ascension, The Vienna Boys Choir, and Burning River Brass— will take place in front of the tree in the Medieval Sculpture Hall. Concert tickets for The Vienna Boys Choir are $65 each; tickets for Anonymous 4, Burning River Brass, and Voices of Ascension are $60 each. Tickets are available by calling the Department of Concerts and Lectures at 212-570-3949 or online at www.metmuseum.org/tickets. Tickets are also available at the Concerts and Lectures box office located inside the Museum’s main entrance (open Tuesday-Saturday, 10 a.m.-5:00 p.m., and Sunday, noon–5:00 p.m.).

Medieval Decorations to Mark “Christmastide” at The Cloisters from Dec. 13 to Jan. 2.

The wreaths and garlands that deck The Cloisters museum and gardens for the holiday season are all hand-made from plants linked with the celebration of Christmastide in the Middle Ages. Striking installations of flowers, fruits, nuts, and evergreens, inspired by medieval sources, will be on display throughout the Museum from Dec. 13 through Jan. 2. Visitors to The Cloisters will pass under a great arch of holly—the plant associated above all others with the medieval feast—to enter the museum. Inside, the doorways of the Main Hall will be adorned with arches of ivy, apples, hazelnuts, and rosehips, and the iron candelabra in the galleries will be dressed with greens and roses. An extensive collection of evergreen topiary, as well as displays of rosemary, cyclamen, citrus, and other potted plants appropriate to the season will be on view in the Saint-Guilhem and Cuxa Cloisters. 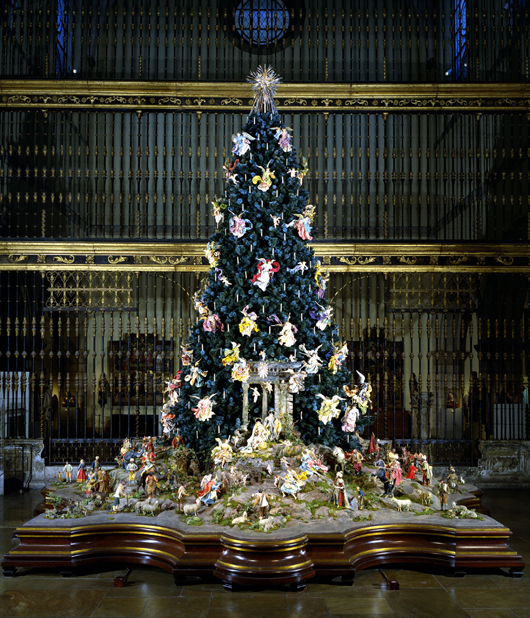 Annual Christmas Tree and Neapolitan Baroque Crèche display, 20 ft. blue spruce with a collection of 18th-century Neapolitan angels and cherubs among its boughs and groups of realistic crèche figures flanking the Nativity scene at its base, displayed in the Museum’s Medieval Sculpture Hall, Gift of Loretta Hines Howard, 1964 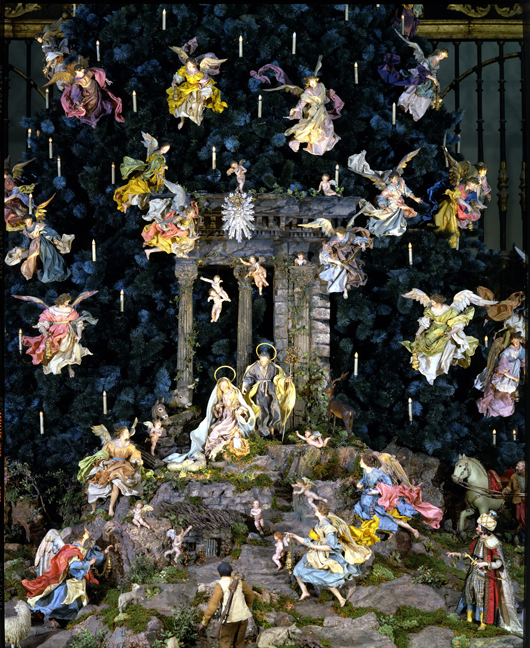 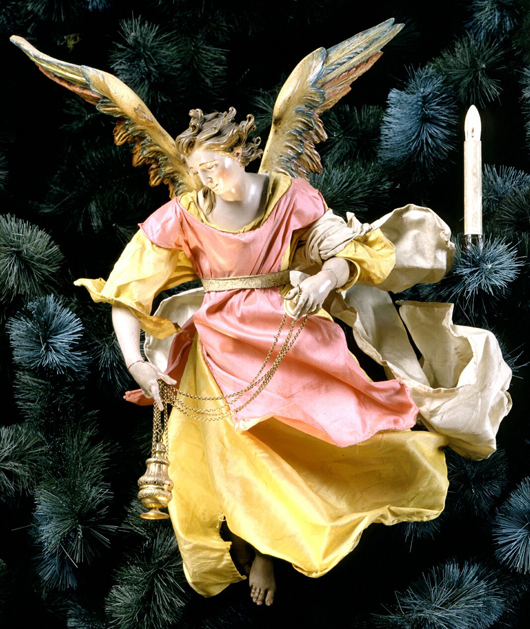