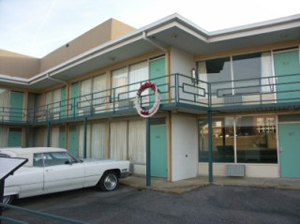 The focal point of the National Civil Rights Museum is the Lorraine Motel, where Martin Luther King was assassinated on April 4, 1968. Image by Bob Jagendorf. This file is licensed under the Creative Commons Attribution-Share Alike 3.0 Unported license.

MEMPHIS, Tenn. (AP) – The National Civil Rights Museum on Tuesday launched the public phase of its campaign to raise $40 million for a major renovation of the facility located at the old Lorraine Motel, the site of Martin Luther King Jr.’s assassination in 1968.

Tennessee Gov. Bill Haslam joined officials from the Memphis museum at a news conference announcing the campaign Tuesday afternoon. Haslam said the state is giving $2.5 million from this year’s budget for the renovation, adding to the $2.5 million given by the state last year.

The museum chronicles the history of the civil rights movement and features the room where King stayed while he was in Memphis supporting a sanitation workers strike. A wreath hangs on the railing of the same balcony where King was felled by an assassin’s rifle bullet on April 4, 1968.

The museum attracts 200,000 people each year, including 60,000 children. But the Lorraine Motel, at 86 years old, needs public donations to help pay for a much-needed renovation and expansion, museum president Beverly Robertson said.

“We’ve found ourselves actually having to decline large public and community events due to a lack of space,” Robertson said. “We realize that this historical place stands alone in its authenticity, even though several new more expansive and certainly more expensive museums are being funded and opened annually.”

The museum’s fundraising campaign already has netted $21 million, which includes the $5 million total state contribution and gifts from foundations and corporations such as FedEx and Ford Motor Co. Officials said $27 million of the $40 million total will go to construction costs, while the rest will be used for an endowment.

Renovations will include updating and expanding existing exhibits, enlarging the main lobby, and installing larger public and community meeting rooms.

Construction is expected to begin in late 2012, with work expected to be finished in early 2014. Parts of the museum will be closed during the renovation.

Haslam said the state has long supported the museum, which opened 20 years ago. Haslam visited the museum on Martin Luther King Day this past January, which also was the day after he was sworn in to serve his first term as governor.

“You literally couldn’t move in the building, there were so many people here,” Haslam said. “The line was out the door, down the street. I remember thinking, ‘This is a wonderful facility.’”