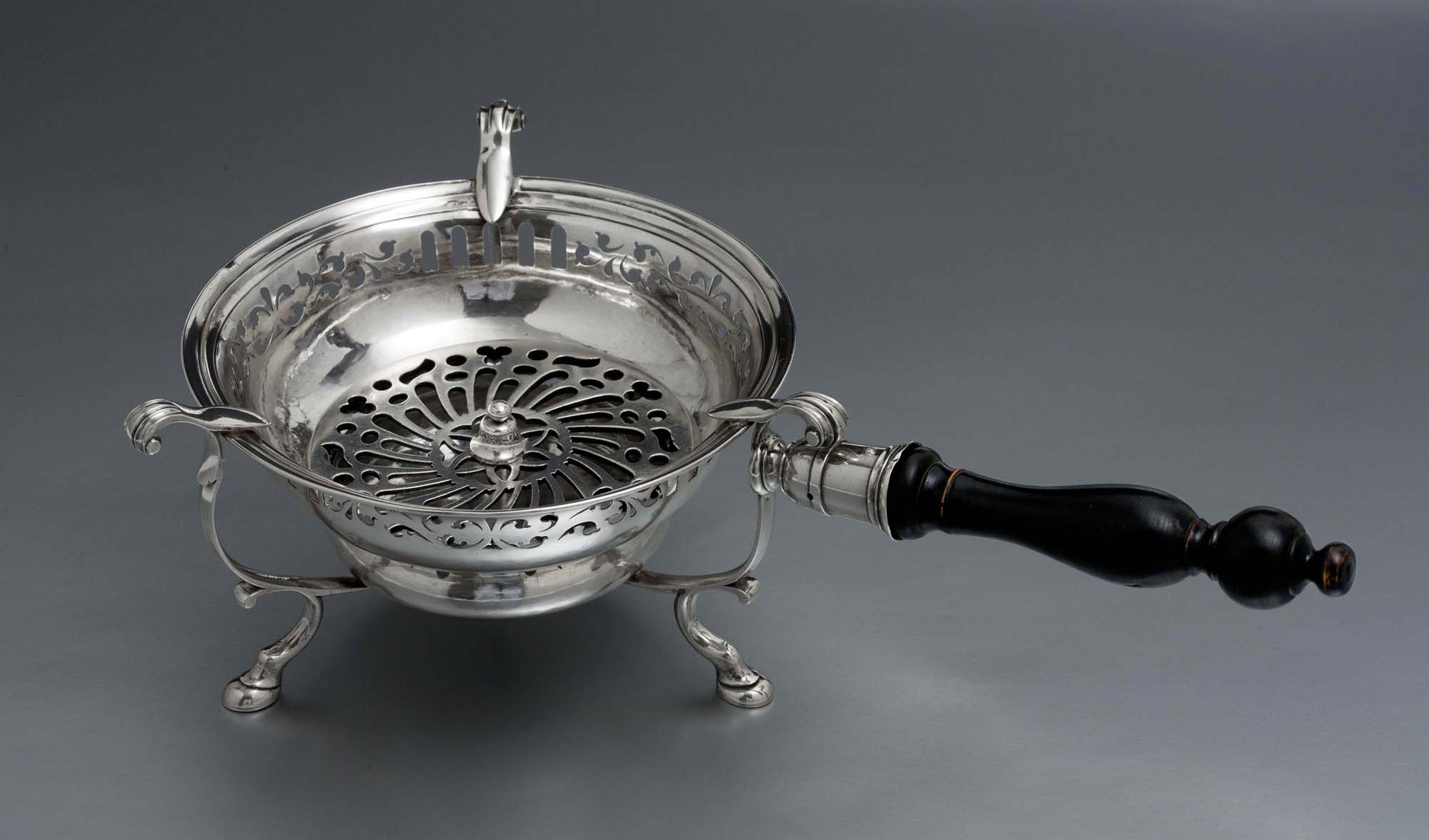 WILLIAMSBURG, Va. – To mark the reinstallation of Colonial Williamsburg’s permanent silver collection in its galleries comes “Silver from Mine to Masterpiece,” an exhibition of approximately 170 objects ranging from the typical to the rare, and dating from a circa 1530 Spanish ingot of silver to items made circa 1835. The exhibition will be on view from Sept. 12, 2015 to Jan. 7, 2018.

In addition to pieces from the permanent collection, the exhibition will also feature select objects on loan from private collections.

Renowned for having one of the world’s outstanding collections of British silver, the DeWitt Wallace Decorative Arts Museum, one of the Art Museums of Colonial Williamsburg, has been actively building its American silver collection since 2009.

“Colonial Williamsburg is home to one of the largest and most comprehensive collections of early British silver outside the United Kingdom, including everything from household implements to works from the British royal collections,” said Ronald L. Hurst, the foundation’s vice president for collections, conservation, and museums and its chief curator. “Highlights from this impressive body will be compared and contrasted with notable America silver in the forthcoming exhibition.” 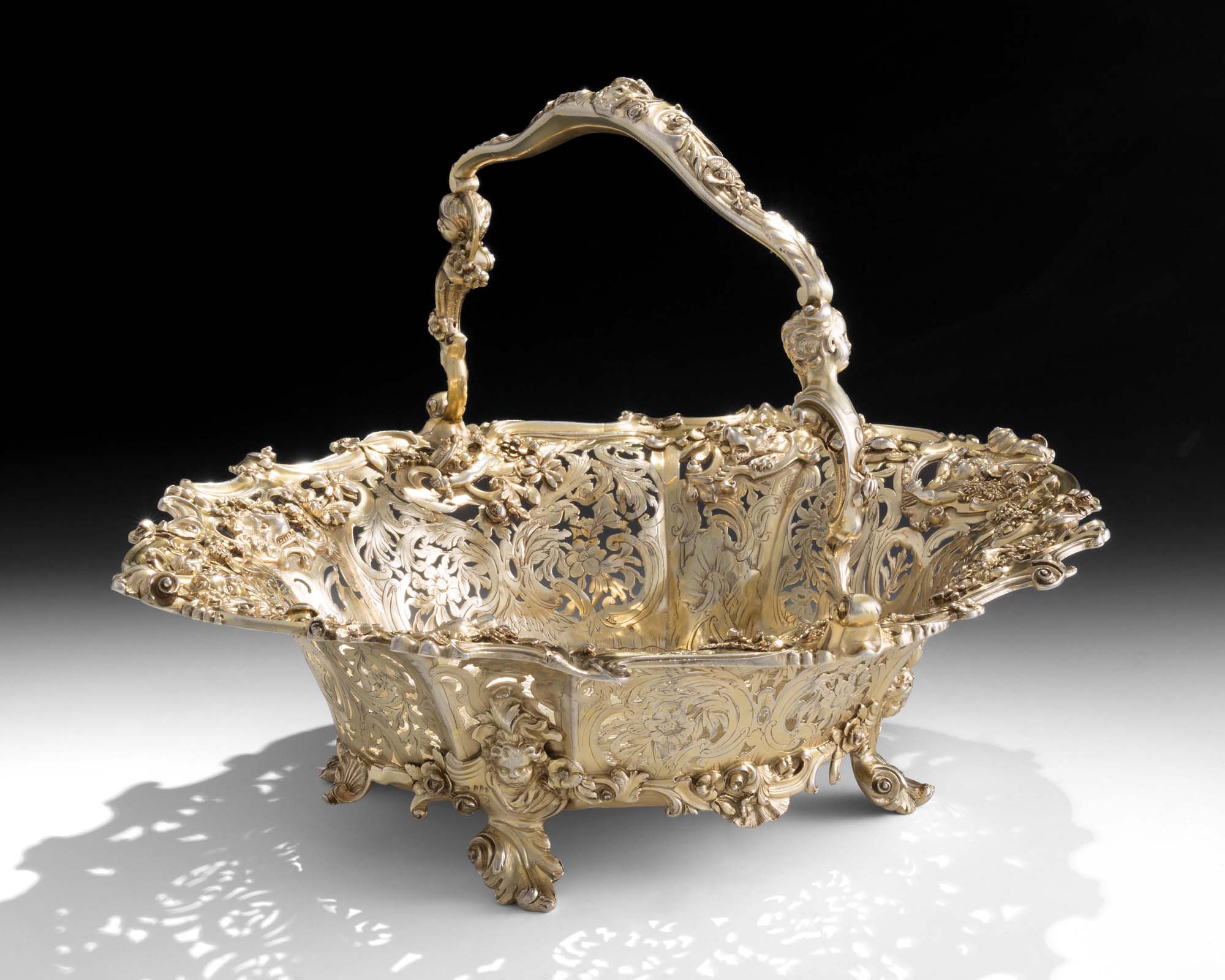 “Silver from Mine to Masterpiece” will feature sections on master silversmiths, such as Paul de Lamerie, Paul Revere, Myer Myers, Hester Bateman, Paul Storr and Matthew Boulton; ceremonial silver; commemorative, military and celebratory silver; ornamentation and technique; fakes and forgeries; condition and conservation; jewelry and accessories; and silver made in early Williamsburg.

Approximately one-third of the objects to be on view are of American origin with the remainder from England. Forms range from teapots and tankards made for affluent Americans to a unique silver chandelier weighing more than 50 pounds fashioned for King William III of England.

“Silver has always played an important role in everyday life. Today, silver is a key industrial component in everything from cell phones, to DVDs and even on/off switches,” said Janine E. Skerry, Colonial Williamsburg’s curator of metals. “Historically, silver coins were the basis of the world economy and silver tableware was a powerful statement of wealth and taste. “Silver from Mine to Masterpiece” will explore the many stories of this noble metal in early England and America.”

Among the virtuoso objects visitors will find in the exhibition is a silver chandelier marked by Daniel Garnier in 1691-1697 for King William III of England, which originally hung at St. James’s Palace in London. With arms for 10 candles, it weighs 721 troy ounces, or almost 50 pounds. Owned by Colonial Williamsburg since 1938, it is now the only 17th-century English silver chandelier in America. 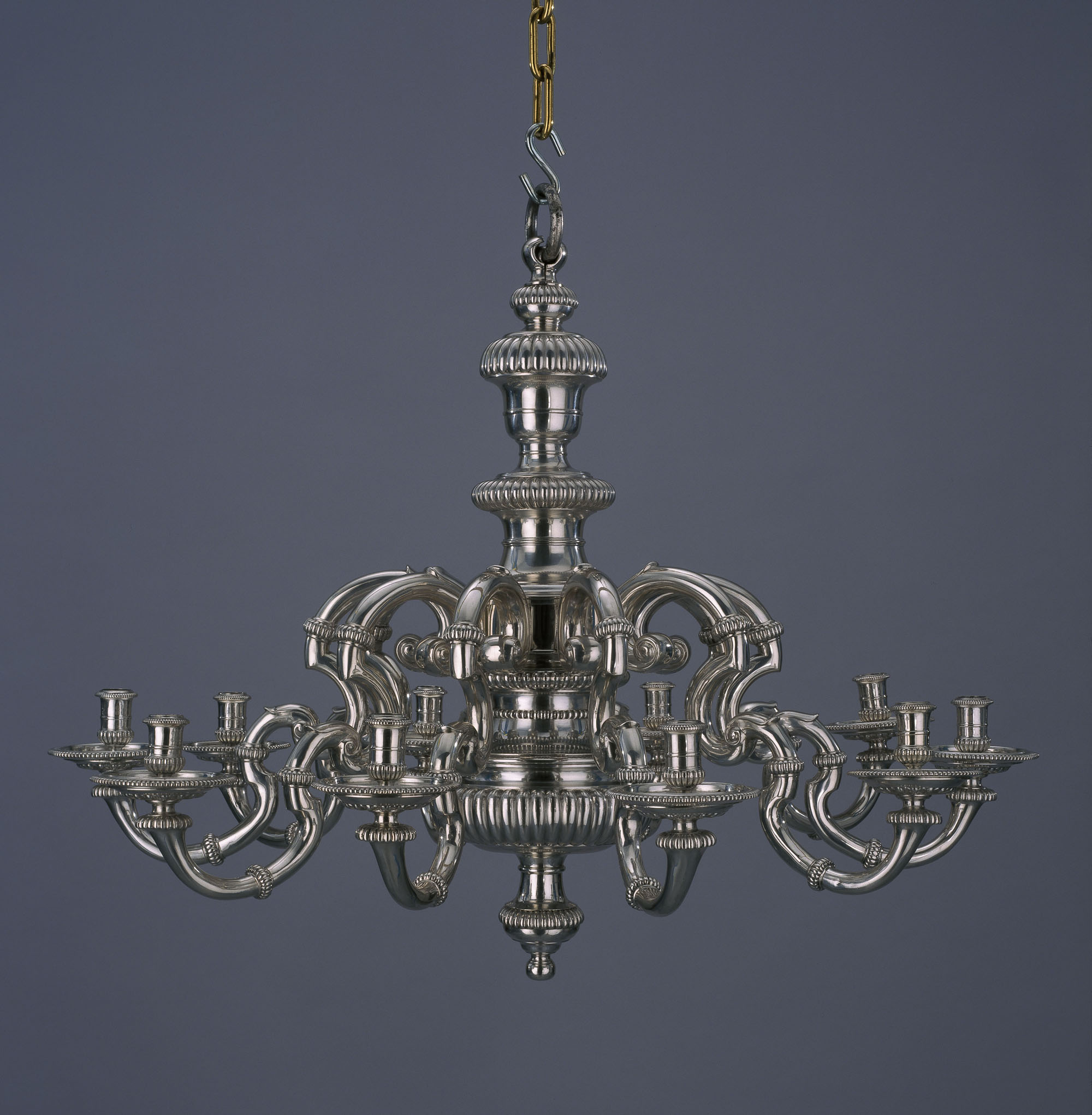 American silver is also well represented in the exhibition, as evidenced in a soup tureen marked circa 1835 by the New York silversmith William L. Adams. It is a splendid example of the classical style popular in early 19th century America: large animal paw feet and bold acanthus leaves support an oval bombe-form body embellished with foliate-framed reserves on either side. Evidence of the burgeoning Egyptian taste is found in the palm-leaf pattern of banding around the rim of the body. 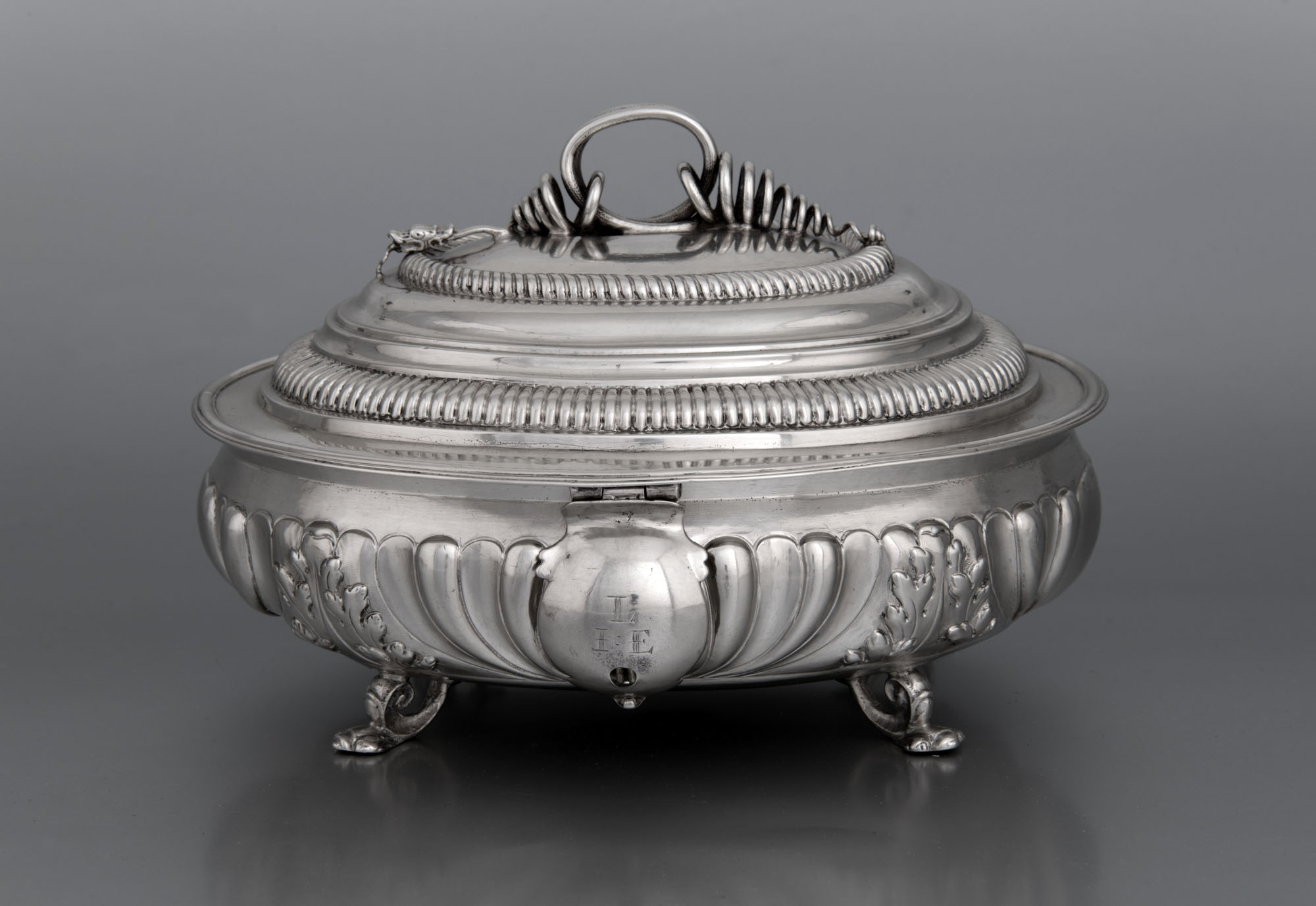 For anyone who appreciates and admires silver – from the colonial period to the early 19th century – “Silver from Mine to Masterpiece” offers an extraordinary opportunity to see some of the finest examples of early English and American objects on view together for the first time and to learn about not only the objects themselves but also about silver as a material and the techniques used in its fabrication. 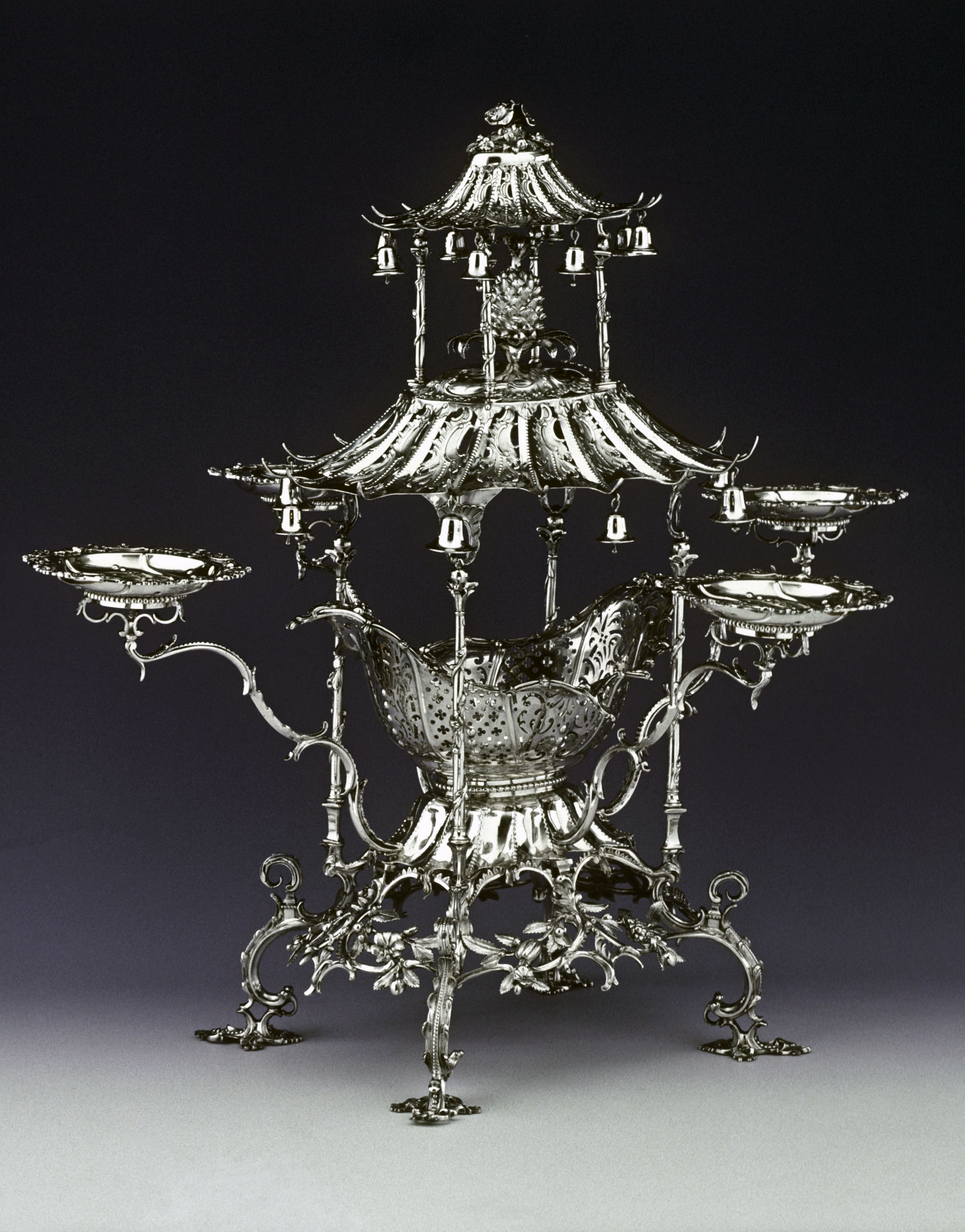