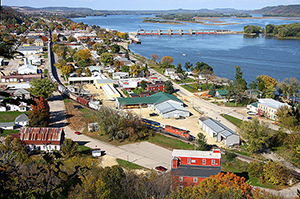 A view of Bellevue, Iowa, on the Mississippi River. Image by Dawikieditor96. This file is licensed under the Creative Commons Attribution-Share Alike 3.0 Unported license.

BELLEVUE, Iowa (AP) – The contents of a century-old Bellevue marine engine-building shop will be an unusual addition to the National Mississippi River Museum & Aquarium in Dubuque.

The Iowa Marine Engine and Launch Works produced thousands of boat engines for about three decades starting in the late 1800s. After that, the well-equipped machine shop was used to build various pieces of equipment and to repair antique tractors and other items until the last of three generations of owners, William Brandt, died last year.

The Telegraph Herald reports the sturdy limestone building, at Chestnut and Second streets along the railroad tracks through Bellevue, was a hub of manufacturing activity in the river town. Its well-regarded engines powered boats across the country. The business patriarch, Joseph Brandt, also designed and built several famous racing boats in the early 20th century.

William Brandt enjoyed tinkering in his vast shop and at Brandt’s Garage, where he worked as a mechanic, and invited cronies to join him for tinkering and talking sessions. A handful of Bellevue men dropped in often to shoot the bull and help Brandt restore the old tractors. Bill Rieckens, who owns a similar old stone building across the street, was one.

“Bill was easygoing, and we’d talk about old times and just about everything else over a pop or two,” said Rieckens, a member of the board of directors of the Jackson County Historical Society. The organization was interested in acquiring the shop, and Brandt expressed a desire to leave it to the group.

“We wanted it pretty bad, and we could have made it work,” Rieckens said.

Jan Brinker, of Bellevue, Brandt’s cousin and closest relative, was his estate executor and contacted the river museum about donating the shop contents to the national facility. Brinker did not return calls from the TH for comment.

Museum staff and volunteers have been examining and cataloging thousands of items in the shop since July. The preliminary work has been funded by a grant from an Iowa Resources And Enhancement Program historical grant.

“Inside, it looks like it did 100 years ago, like the workers were there yesterday, walked out and never came back,” said Cristin Waterbury, director of curatorial services at the museum. “It’s in very good shape, and the machinery works like a charm.”

River museum president and CEO Jerry Enzler has known about the marine shop since the 1980s and marvels at its pristine condition.

“It’s rare indeed to find something like this so well preserved. It’s like a frozen moment in time,” he said.

The shop equipment will be carefully removed from the Bellevue building next year and the museum will build a separate exhibit, possibly a separate building, to display the shop works, Enzler said. It could be open to the public in 2015.

“This represents not just things but also people and their occupations—‘folk life,’” Enzler said. “We’re celebrating our 10th anniversary at the river museum, and this will be a key piece of our next five years.” 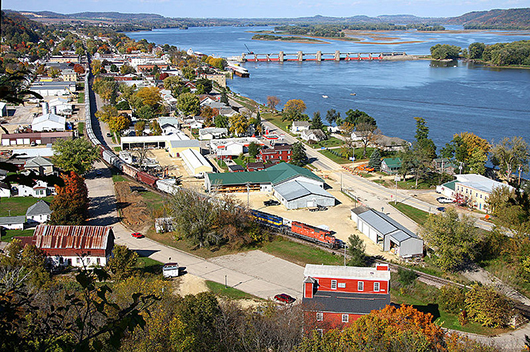 A view of Bellevue, Iowa, on the Mississippi River. Image by Dawikieditor96. This file is licensed under the Creative Commons Attribution-Share Alike 3.0 Unported license.

U. of Iowa to study options for new art museum