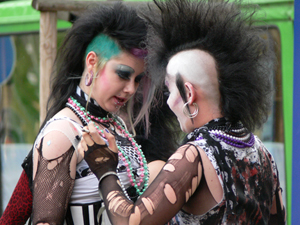 Punk fashion of the 1970s has endured for more than three decades, as seen in this photo of two Goths at the Wave Gotik Treffen in Leipzig, Germany, May 26, 2007. Photo by Grant Mitchell, licensed under the Creative Commons Attribution 2.0 Generic license.

NEW YORK – The Metropolitan Museum of Art announced today that the spring 2013 exhibition organized by the Costume Institute will be “Punk: Chaos to Couture.” The exhibition, which will be on view from May 9 through Aug. 11 (preceded on May 6 by the Costume Institute Benefit), will examine punk’s impact from its birth in the 1970s through its continuing influence on high fashion today.

“Punk’s signature mixing of references was fueled by artistic developments such as Dada and postmodernism,” said Thomas P. Campbell, director and CEO of the Metropolitan Museum of Art, “so it makes sense to present this exhibition in a museum that also shows the broader output of those movements. Indeed, that dialogue between art and fashion is what makes the Costume Institute so singular.”

To celebrate the opening of the exhibition, the museum’s Costume Institute Benefit will take place on Monday, May 6. The evening’s co-chairs will be Academy Award-nominated actress Rooney Mara; Lauren Santo Domingo; Riccardo Tisci, creative director of Givenchy; and Anna Wintour, editor-in-chief of Vogue. This fundraising event is the Costume Institute’s main source of annual funding for exhibitions, acquisitions and capital improvements.

“Since its origins, punk has had an incendiary influence on fashion,” said Andrew Bolton, curator in the Costume Institute. “Although punk’s democracy stands in opposition to fashion’s autocracy, designers continue to appropriate punk’s aesthetic vocabulary to capture its youthful rebelliousness and aggressive forcefulness.”

The exhibition, in the museum’s second-floor Cantor galleries, will feature approximately 100 designs for men and women. Original punk garments from the mid-1970s will be juxtaposed with recent, directional fashion to illustrate how haute couture and ready-to-wear have borrowed punk’s visual symbols, with paillettes being replaced with safety pins, feathers with razor blades, and bugle beads with studs. Focusing on the relationship between the punk concept of do-it-yourself and the couture concept of made-to-measure, the exhibition will be organized around the materials, techniques and embellishments associated with the anti-establishment style. Presented as an immersive multimedia, multisensory experience, the clothes will be animated with period music videos and soundscaping audio techniques.

Organized thematically, gallery sections will include “Rebel Heroes,” which will evoke the New York and London music scenes of the mid-1970s, focusing on iconic punk bands such as the Ramones, the Sex Pistols and the Clash. The “Couturiers Situationists” gallery will examine Malcolm McLaren and Vivienne Westwood’s visual codification of punk through the merging of social realism and artistic expression, featuring fashion and graphics they produced for their boutique at 430 King’s Road in London, including Let it Rock, SEX and Seditionaries.

“Pavilions of Anarchy and Elegance” will juxtapose punk designs with haute couture creations, focusing on customization and hand craftsmanship. “Punk Couture” will explore high fashion’s engagement with punk hardware such as studs, spikes, chains, zippers, padlocks, safety pins and razor blades. “D.I.Y. Style” will highlight the impact of punk’s bricolage ethos on high fashion, including the use of recycled materials from trash culture. “La Mode Destroy” will examine the effect of punk’s rip-it-to-shreds attitude via torn and shredded garments associated with deconstructionist fashions.

A catalog by Andrew Bolton will accompany the exhibition. It will be published by the Metropolitan Museum of Art and distributed by Yale University Press.

The exhibition is made possible by Moda Operandi. Additional support is provided by Condé Nast.

The museum’s website at www.metmuseum.org will feature the exhibition. 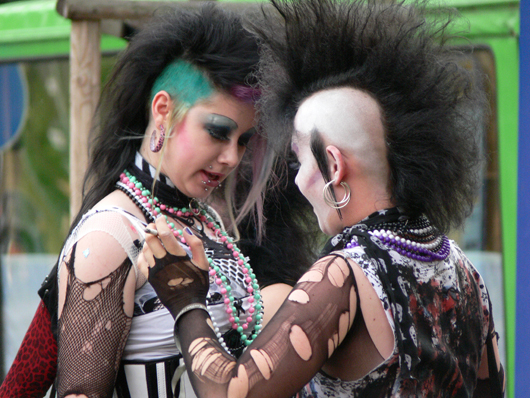 Punk fashion of the 1970s has endured for more than three decades, as seen in this photo of two Goths at the Wave Gotik Treffen in Leipzig, Germany, May 26, 2007. Photo by Grant Mitchell, licensed under the Creative Commons Attribution 2.0 Generic license.