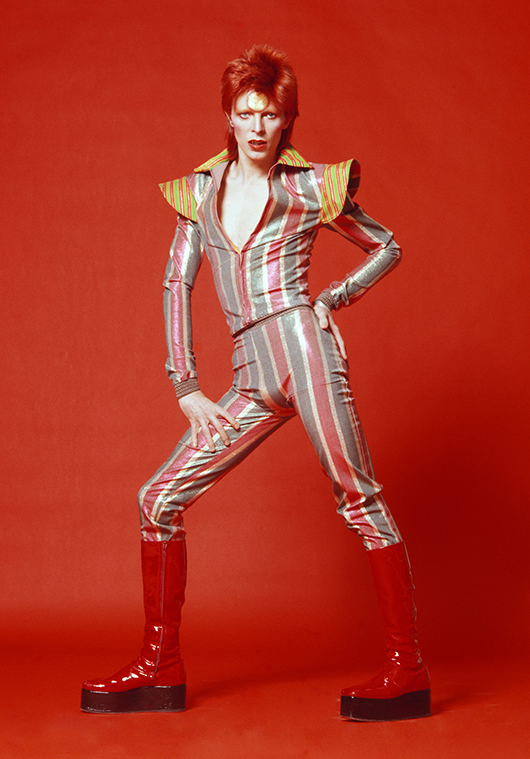 CHICAGO – More than 193,000 people visited the Museum of Contemporary Art Chicago (MCA) during the 15- week run of the “David Bowie Is” exhibition (Sept. 23—Jan. 4), setting a new attendance record for the museum.

As the most successful exhibition in the MCA’s 47-year history, “David Bowie Is” also set new attendance records for all of the Bowie-related programs and performances, some selling out in less than an hour, and the highest sales for the MCA Store with the addition of the Bowie- themed store. The MCA was the only U.S. venue for this exhibition, organized by the Victoria and Albert Museum, London.

“We brought this exhibition to the MCA because it was an ideal bridge to connect with new audiences who are interested in the multidisciplinary arts that have always been a hallmark of the museum. We are thrilled that so many people from around the country visited us for the first time, and we are especially proud of the enthusiasm and support we had in Chicago, where members of the community had a chance to rediscover the MCA,” said MCA Director Madeleine Grynsztejn.

There was an overwhelming response to the exhibition from the Chicago community. During its run, restaurants, hotels and venues had Bowie-inspired events. People regularly came to the MCA dressed as one of David Bowie’s stage personas, and a record-breaking 79 million Twitter accounts saw the exhibition hashtag #DavidBowieIs. Visitors to the MCA website numbered more than 1 million. The MCA hosted an opening day Bowie Tribute Concert drawing thousands of Chicagoans to Daley Plaza on Sept. 23, which was officially declared “David Bowie Day” in Chicago.

Peggy Papaioannou, MCA chief financial officer, developed a new financial model to optimize capacity during the MCA’s first time having timed tickets, a special admission price, and extended hours. Also, a special “Bowie Superfan” ticket was sold in advance of general ticket sales for Bowie enthusiasts who wanted to book their travel early. The nationwide synchronized release of David Bowie’s new three-CD compilation Nothing Has Changed by Columbia Records, and the U.S. screenings of the David Bowie is happening now documentary, created by the V&A and directed by Hamish Hamilton, contributed to the national attention and success of the exhibition run.

The artEdge 2014: David Bowie Is gala, presented by Louis Vuitton, drew the biggest names in Chicago’s social scene with a special performance by music legend Bryan Ferry. Over 750 people attended the gala, which raised more than $2.85 million, benefiting MCA exhibitions and programs.

The Bowie-themed store was designed by the MCA to offer hundreds of Bowie-inspired design objects, some of which were produced exclusively for the MCA. During the run of the exhibition, the MCA Store sold 189,000 items including 7,000 Bowie exhibition catalogues, 14,000 t-shirts produced exclusively for the MCA, and 2,100 limited edition prints including a Chicago edition of David Bowie as Aladdin Sane by Brian Duffy.

“David Bowie Is” presents the first international exhibition of the extraordinary career of David Bowie—one of the most pioneering and influential performers of our time. The exhibition focuses on his creative processes and collaborative work with artists and designers, and demonstrates how his work has both influenced and been influenced by wider movements in art, design, music, and theater. The exhibition’s multimedia design introduces advanced sound technology by Sennheiser and video installations to create an immersive journey through Bowie’s artistic life. MCA Chief Curator Michael Darling organized the Chicago presentation of the exhibition.

The exhibition continues its international tour with upcoming stops at the Philharmonie de Paris, Cité de la Musique in Paris (March—May 2015), the Australian Centre for the Moving Image in Melbourne (July— Nov 2015), and the Groninger Museum in the Netherlands (December 2015—March 2016).