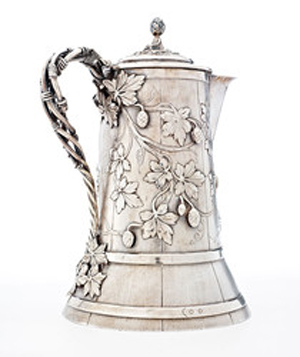 INDIANAPOLIS – When Lilly House opens for a new season on April 1, the historic mansion – the cornerstone of the Indianapolis Museum of Art‘s 52-acre Oldfields Estate – will be the site for a unique showcase of American history.

“Tiffany, Gorham, and the Height of American Silver, 1840-1930” will dazzle visitors with more than 60 exceptional pieces of 19th- and 20th-century silver from private lenders and the IMA’s permanent collection.

The exhibition explores the legacy of the American silverware industry, from the initial surge following the removal of foreign wares from the market with the enactment of the Tariff of 1842, to the nation‘s achievement as the world’s largest producer of silverware by the late 19th century. Highlighted in the exhibition are the advancements made by Tiffany & Co. and Gorham Manufacturing Co., manufacturers that propelled the nation onto the world stage as an international leader in silver production. Visitors will also learn how the silver industry influenced American culture, from dining and etiquette rituals to social class identities.

The exhibition is curated by Dr. Charles L. Venable, the IMA’s Melvin & Bren Simon Director and CEO. Venable’s publication, “Silver in America, 1840-1940: A Century of Splendor,” won the Charles F. Montgomery Prize for excellence in decorative arts scholarship in 1994.

“It has been a true delight to curate this exhibition of extraordinary American silver, as major collectors have been so generous,” Venable said. “The quality of silver work is truly outstanding and the variety of forms amazing. The Granthams of Downton Abbey would feel right at home.”

The pieces displayed in the exhibition reflect the broad array of styles popularized during the 19th and 20th centuries, from the elaborate Gothic and Rococo revival styles to the simplified aesthetics derived from ancient Greek and Roman art to the streamlined Art Deco style that gained popularity in the 1920s. A highlight of the exhibition is a host of splendid works in the naturalistic, Japanese taste of the 1880s.

Exhibition visitors can also learn more about silver production with a video illustrating the process at Gorham Manufacturing Co., and a touchable silver ingot to add a hands-on element to the exhibition.

Tiffany, Gorham, and the Height of American Silver, 1840-1930 is located on the second floor of Lilly House and will run through Jan. 4, 2016. The exhibition is presented by The Alliance of the IMA.

Portrait of Davy Crockett’s widow sells for $10,500
Scroll to top