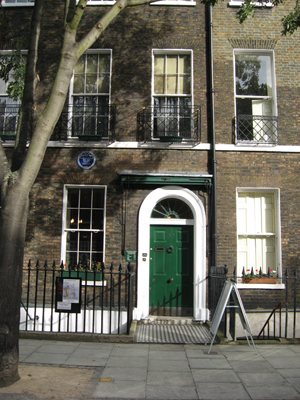 The Charles Dickens Museum in London. The author lived in the Georgian terraced house at 48 Doughty Street for nearly three years in the late 1830s. Image by Jack 1956, courtesy of Wikimedia Commons.

For years, the four-story brick row house where the author lived with his young family was a dusty and slightly neglected museum, a mecca for Dickens scholars but overlooked by most visitors to London.

Now, after a 3 million pound ($4.8 million) makeover, it has been restored to bring the writer’s world to life. The house reopened this month, and its director says it aims to look “as if Dickens had just stepped out.”

“The Dickens Museum felt for many years a bit like Miss Havisham, covered in dust,” said museum director Florian Schweizer, who slips references to Dickens’ work seamlessly into his speech. Miss Havisham is the reclusive character central to the plot of Great Expectations.

Now, after a revamp code-named – inevitably – Great Expectations, the house is transformed.

Or, Schweizer said recently, quoting that novel: “I have been bent and broken, but – I hope – into a better shape.”

Few authors remain as widely quoted, read and adapted as Dickens is 200 years after his birth. Characters such as Ebenezer Scrooge and Tiny Tim, Pip and Miss Havisham, Fagin and Oliver Twist, are known to millions around the world.

And no writer is more closely associated with London than Dickens, whose accounts of Victorian workhouses, debtors’ prisons and the urban poor embarrassed the establishment into acting to alleviate poverty.

He lived all over the city in his impoverished youth and increasingly affluent adulthood, but the house at 48 Doughty Str. in the Bloomsbury area of London is his only home in the city to survive.

Dickens lived in the house between 1837 and 1839, a short but fruitful period that saw the birth of his first two children. It’s the site where he wrote Nicholas Nickleby and Oliver Twist, going in the process from jobbing journalist to rising author whose serialized stories were gobbled up by a growing fan base.

Dickens leased the simple but elegant Georgian house, built in 1807, for 80 pounds a year.

The restored museum has all the modern trappings, including audio-guides, a learning center and a cafe. There also is a temporary exhibition of costumes from Mike Newell’s new film adaptation of Great Expectations, starring Helena Bonham Carter and Ralph Fiennes.

But at its heart it is a house – the home of a proud young family man. Visitors can see the blue-walled dining room where Dickens entertained his friends, complete with original sideboard and a portrait of the 25-year-old author looking, it has to be said, pretty pleased with himself.

“It’s rather Byronic,” Schweizer said. “Not the Victorian sage with a beard that we think of.”

Upstairs are the drawing room where Dickens moved guests to laughter and tears with readings from his works – visitors can hear actor Simon Callow do the honors on recordings – and the bedroom where his sister-in-law Mary died at the age of 17, a tragedy that may have influenced the many death scenes in Dickens’ novels.

The rooms are furnished with Dickens’ own possessions – his writing desk and chair, his wardrobe and shaving kit, copies of his books annotated in his cramped handwriting.

“We’re trying to make it feel like a home,” Schweizer said. “As if Dickens had just stepped out.”

The museum does not skip over the darker periods of Dickens’ life.

On the top floor, the former servants’ quarters hold a set of bars from Marshalsea prison, where Dickens’ father was imprisoned for his debts, and jars from the boot-polish factory where 12-year-old Charles was sent to work.

The experience of financial insecurity marked Dickens for life, and drove his workaholic quest for success. He wrote more than 20 books, had 10 children, traveled the world on lecture tours and campaigned for social change until his death from a stroke in 1870 at the age of 58.

The museum’s directors have been criticized for shutting the facility during most of the bicentenary of Dickens’ birth – and during the tourism bonanza that accompanied the London Olympics.

It reopened in time for a Dickensian Christmas, complete with readings, performances of A Christmas Carol, mulled wine and mince pies.

The museum hopes to draw 45,000 visitors a year, a 50 percent rise on pre-refurbishment levels. Schweizer thinks Dickens’ future has never been rosier.

“There has always been interest. I think the bicentenary has taken it to a whole new level,” Schweizer said. “There is a great hunger of Dickens, especially in these times” of economic austerity and uncertainty.

As evidence, he held up a London newspaper proclaiming news of the Duchess of Cambridge’s pregnancy under the headline “Kate Expectations.”

“People still get all the references,” he said.

Jill Lawless can be reached at http://Twitter.com/JillLawless 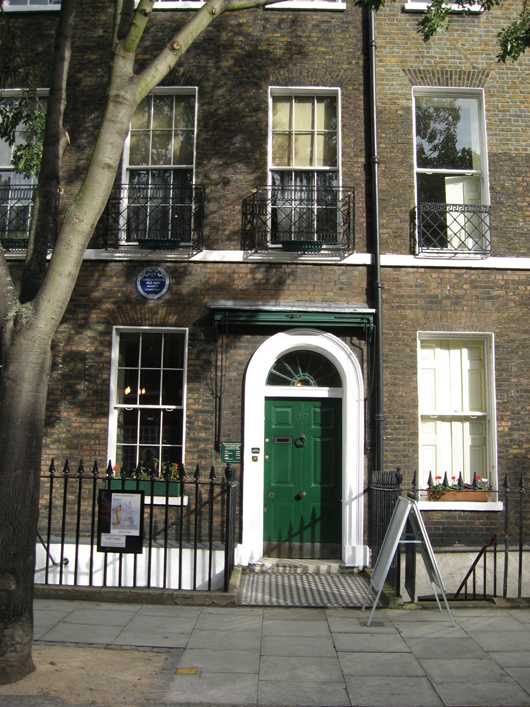 The Charles Dickens Museum in London. The author lived in the Georgian terraced house at 48 Doughty Street for nearly three years in the late 1830s. Image by Jack 1956, courtesy of Wikimedia Commons.