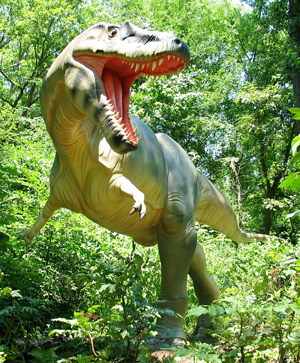 Albertosaurus, a menacing character encountered on the Dinosaur Trail. Image courtesy of Museum of Life and Science in Durham, N.C.

WRAL-TV reported that the Museum of Life and Science in Durham said Thursday that attendance increased by nearly a quarter from when the new Dinosaur Trail opened in July 2009 through this past June.

Museum spokeswoman Taneka Bennett says nearly 85,000 more people visited the museum than in the same period a year earlier, bringing the total number of visitors to about 443,750.

Bennett attributed the increase mostly to the popularity of the quarter-mile-long trail that features life-sized sculptures of dinosaurs from the Cretaceous period, which was approximately 75 million years ago.

The first scene encountered on the trail takes place 77-75 million years ago. After passing a Parasaurolophus lounging at the head of the trail, visitors come to a fork in the road where a hungry Albertosaurus is charging toward an Edmontonia and a young Styracosaurus. The Edmontonia is crouching down to protect itself, but at this moment the Albertosaurus seems more interested in the Styracosaurus, who is vulnerable after being separated from his herd. Further up the trail, a group of Troodon are stalking a nest of eggs that a mother Maiasaura is protecting.

The rest of the trail is a scene that could have taken place around 68-65 million years ago. There’s a pair of Stygimoloch circling each other, fighting. Meanwhile a large Alamosaurus lumbers along while a tiny herd of Leptoceratops dodge the Alamosaurus’s feet.

By taking part in the podcast tour, visitors who bring their own MP3 players with the commentary already downloaded from the museum’s Web site can listen to paleobiologist and museum volunteer Chuck Pell talk about dinosaur coloration and biomechanics via a 15-minute audio tour. 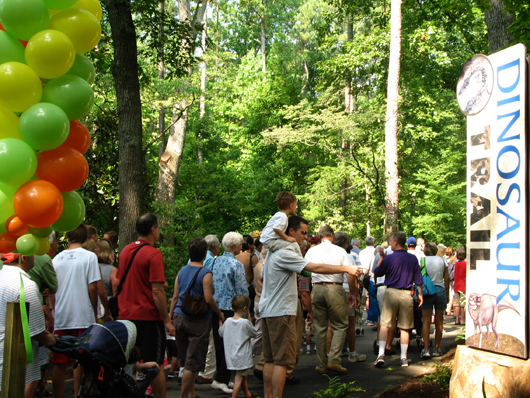 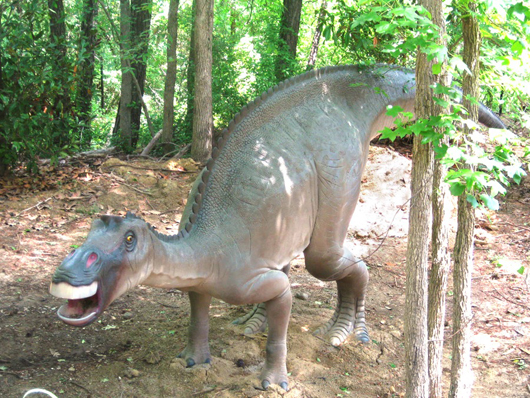 Maiasaura – meaning "good mother lizard" – is believed to have been the first dinosaur to exhibit parental care. On the Dinosaur Trail, this Maiasaura closely guards her nearby nest of eggs. Image courtesy of Museum of Life and Science in Durham, N.C.